The Show
It's pretty amazing that "Rugrats" has been around since 1991, yet still maintains its place as one of the most popular cartoons among kids. The lifespan of a kids show tends to be short, as kids grow out of their interests quickly. But Tommy Pickles and his gang of babies maintains, and has even been aged into preteens, a move that rarely, if ever happens on cartoons. After all, eternal youth is one of animation's biggest advantages.

As the "Rugrats" fan base grows, the series becomes more of a childhood institution than just another show. And with any television institution, one of the big staples is the holiday special. "Rugrats" is no different, taking advantage of holiday themes to educate, entertain and enlighten. This DVD set brings home several holiday-themed episodes, from all across the show's 10 seasons. Technically, there are three main features, and seven bonus episodes, and most of these "episodes" are only one of the 15-minute segements, not the entire episode. Also, on the Halloween disc, only the main episode involves the holiday.

On "Halloween", the main feature is "Curse of the Werewuff," (Season 9, No. 144) in which Angelica convinces Chuckie that he will become a "werewuff" if he wears that costume to trick-or-treat. It's the usual "help Chuckie not be scared" storyline, but the animation, including the werewolf dream sequence, is nicely done.

Three of the bonus episodes have a "scare" element, but they are hardly Holiday episodes. "Ghost Story" (Season 6, No. 103) has the babies making up a story late at night, and includes a cross-over with "AAAHH!!! Real Monsters," while "Aunt Miriam" (Season 2, No.25) features a visit by Grandpa Lou's sister. "Sleep Trouble," (Season 5, No. 89) has Tommy and Chuckie trying to catch the Sandman, followed by "Spike's Nightscare" (Season 8 No. 130), a short cartoon about the dog's bad dreams. 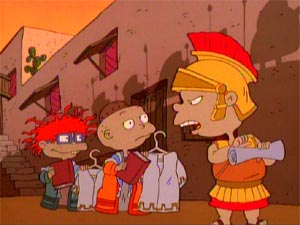 "Turkey and Mistletoe" has a pair of features, "The Turkey Who Came to Dinner" (Season 4, No. 72) and the two-part "Babies in Toyland" (Season 9, Nos. 158-159). "Turkey" shows how the hustle and bustle of Turkey Day covers up the true meaning of the holiday, while "Toyland" tells the story of baby Dil's first Christmas. It's only the third "Rugrats" two-parter, and it doesn't drag, despite it being four times the average story's length.

Unlike the "Halloween" disc, this DVD has matching themed bonus episodes. "The Santa Experience" (Season 2, No. 27) has Angelica questioning if Santa is real, and "A Rugrats Kwanzaa" (Season 8, No. 140) sees Suzie learn about the holiday from her colorful Aunt T. The last bonus, "A Rugrats Chanukah" (Season 4, No. 999) has a great historical opening, as the babies learn about Chanukah from Boris.

The Christmas/Thanksgiving disc is a great one, covering most of the bases, but the Halloween disc doesn't hold up its end of the bargain. With just one Holiday episode, it feels a bit tacked on. They should have slapped "Curse of the Werewuff" and several missing holiday episodes ("A Rugrats Passover", "Be My Valentine" and "Mother's Day") on the second disc to make a real Holiday collection.

The DVDs
The Rugrats Holiday Celebration comes on two DVDs, each in a standard keepcase. The two cases are wrapped in a cardboard slipcase that mirrors the well-designed static menus' look. The discs have episode selection options and a play all feature. 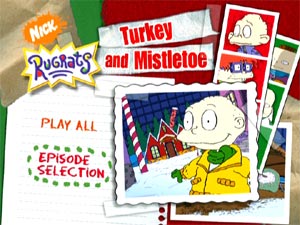 The Quality
These episodes are culled from over 10 years of cartoons, going as far back as 1992. As a result, the level of video and audio quality varies from episode to episode. The 11-year-old "The Santa Experience" looks the worst, with very washed-out color and ragged outlines at times, but the two episodes from 2002's ninth season look fantastically vivid. Oddly, Season Four's Chanukah special has some of the worst problems, with plenty of dirt and some digital artifacts. The stereo sound is simple, but sounds good in nearly every episode, with increased clarity in more recent episodes.

The Extras
The seven non-featured episodes are considered extras, but with a $30 retail price, this set needed all these episodes. There are also some previews for other Nickelodeon products, including a fun trailer for The Spongebob Squarepants Movie.

The Bottom Line
"Rugrats" is the kind of timeless show that should last decades. While this collection could have been more focused and more complete, it still features 10 Rugrats stories that are entertaining, and do a good job of talking about the holidays. It's not the most subtle edutainment, but kids will enjoy learning about other cultures. If your kids love "Rugrats", it's an easy purchase, otherwise, it's a good way to kill a rainy afternoon as a rental. 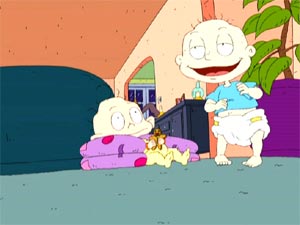