Ilê Aiyê (The House of Life) - A Film by David Byrne 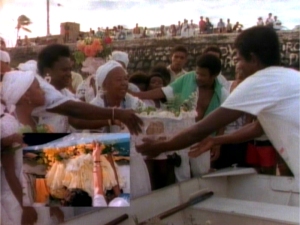 David Byrne's Ilê Aiyê (1989) is certainly not your typical documentary, but that's not necessarily a bad thing. This short film gives the world a look at the Brazilian religion of Candomble, which centers around a belief that humans are a part of nature (as opposed to most Western religions). In essence, the central meaning of Candomble is not passed on by word of mouth, but rather through singing and dancing. For most viewers only accustomed to Western beliefs, Ilê Aiyê might be a little strange at a quick glance. However, any lover of world cultures will find much of this documentary to be a visually fascinating experience.

In fact, that's one of the main differences between Ilê Aiyê and most other documentaries. While other films of the genre rely mostly on a structured presentation, Ilê Aiyê uses non-stop visuals, frequently adding layers of scenes via picture-in-picture. Essentially, these layers of footage provide the viewer with "clues" as to the different meanings of what is presented onscreen, making for quite an busy 51 minutes. Unfortunately, things get a little too busy at times, resulting in an uneven presentation that may turn some viewers off. Combine this with an lackluster quality audio treatment (discussed below), and you've got a film that is equal parts intriguing and frustrating.

Fortunately, Ilê Aiyê doesn't break Documentary Rule #1, as it conveys the information in a strictly objective manner. This is not a marketing tool to convert the masses to the religion of Candomble, but rather a gateway to present the rituals and lifestyle of those who believe in an accurate manner. If nothing else, the pure energy of the film can't be denied: right from the start, a musical group known as "Blocos Afro" starts things off with an infectious sense of rhythm. However, this high level of energy that continues throughout the film may prove to be a little too much for one sitting: even with a brisk pace and a short running time, the film still has a very exhausting quality to it. Whether or not that's a good thing depends strictly on the viewer's taste. 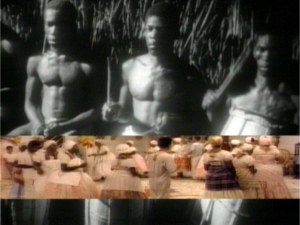 Although Ilê Aiyê has been broadcast on PBS on many occasions since its completion in 1989, Plexifilm has seen fit to release this documentary as a stand-alone DVD. It's no secret that the technical presentation seems to be somewhat lacking, but it's hard to tell if this film has ever looked or sounded better. Regardless, the audio quality isn't up to par and really drags the overall viewing experience down, although the included audio commentary by director David Byrne certainly proves to be a nice inclusion. In any case, let's see how this one stacks up, shall we?

Quality Control Department
Video & Audio Quality:
I wasn't expecting much from a 1989 low-budget TV documentary, so I wasn't surprised at the lackluster video treatment of Ilê Aiyê. To be fair, the film's source material probably wasn't top-quality to begin with, but this is still a fairly unimpressive presentation for a film that has every right to be visually stunning. Although the print looks fairly clean, there's not much detail or sharpness to speak of, and the colors seem to bleed at times (especially the redness levels). Portions of this documentary also appear to make use of stock footage, so the rough quality can be excused for those segments. Overall, it's not unwatchable (and is most likely better than its broadcast counterpart), but it won't blow you away by any means.

Suffering slightly more is the DVD's audio quality (presented in Dolby Digital 2.0), which really hindered my enjoyment of this film. The biggest culprit here is the dialogue itself, as the moderately thick accent of the female narrator is incredibly frustrating to understand at times. This problem could have easily been solved with the inclusion of English subtitles, but they're nowhere to be found. Overall, this was easily the biggest disappointment of Ilê Aiyê, and really makes me wonder why the audio wasn't cleaned up more. With any luck, you'll have better luck understanding the narration than I did. 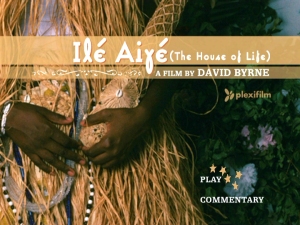 Although there weren't many menus to navigate through (due to the lack of supplements), the layout was very simple and attractive. The 51-minute film was not divided into chapter selections, and no layer change was detected. Packaging was very elegant, featuring a clear keepcase with artwork on both sides of the cover. A nice insert booklet was also included, featuring an essay by Luc Sante (originally published in a 1989 issue of Interview magazine).

Besides for the essay provided in the insert booklet, the only extra was an optional Audio Commentary by director David Byrne. Although Byrne doesn't come across as a top-notch commentator (frequently stumbling over words and pausing mid-sentence to gather his thoughts), he does a good job of shedding some much-needed light on the project. Due to the previously-mentioned audio problems with this DVD, it's almost preferable to view the feature with the audio commentary instead of the original track---if anything else, it'll prove to be a much less frustrating experience for most viewers. Although the lack of any other supplements would normally hinder most releases, one gets the feeling that there wasn't a wealth of related bonus material to choose from.

Well, this release was certainly a mixed bag overall. On one hand, the skill that Byrne uses to construct this documentary makes for a engaging production, but the inherent problems with the film's technical presentation lessen the impact considerably. Sadly, it appears that this DVD may still be the best way to experience Ilê Aiyê, so I'd still advise any interested parties to keep an eye out for this one. Although the $25 price tag is a little steep for the limited amount of content provided, it may be worth a weekend look for casual and seasoned documentary lovers alike. Rent It.