Eternal Sunshine of the Spotless Mind

Whether you're currently in a successful relationship or in-between attempts, chances are you've met a special someone during your lifetime. Romantic relationships have the unfortunate task of providing extreme highs and lows for those involved, and rarely play out in the ways we'd hoped they would. Still, for most people, life would be incomplete without the pursuit of love. To make a long story short: a great relationship can be the best thing in the world, while a failing one can be the exact opposite.

Now, imagine your most recent relationship didn't end so well. If you had the ability to erase all memories of that relationship...would you?

To get straight to the point, Eternal Sunshine of the Spotless Mind is certainly up to the task of debating the opening quote. Among other things, it's an honest look at the strange side of human relationships...with an extreme emphasis on strange. Followers of director Michel Gondry will recognize his careful use of visual effects and jarring illusions, while followers of writer Charlie Kaufman...well, they know what they're in for.

It's incredibly tough to describe a film like Eternal Sunshine of the Spotless Mind and do it justice, but here goes: Joel (Jim Carrey, at top) is a mess after a recent breakup with Clementine (Kate Winslet, seen above), especially after learning she's undergone an experimental "memory erasing" procedure. In essence, he's gone from her life entirely. Not surprisingly, he attempts to undergo the same treatment, but a funny thing happens during the procedure: he changes his mind. The emotional bulk of the story revolves around his memory hallucinations during the treatment, as his life's recollections violently collide with one another. It's a truly odd premise that makes for a very entertaining film, and firmly establishes Michel Gondry as a director to keep your eye on. 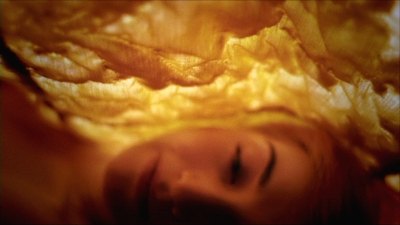 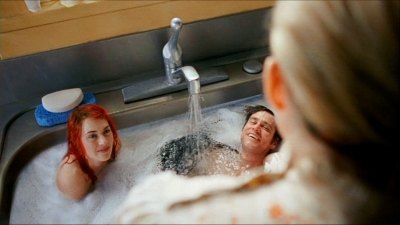 Still, it's more than the directing that makes Eternal Sunshine of the Spotless Mind work so well. Among other highlights, the film features top-notch performances, most notably in the two leads. Jim Carrey retains his charisma without going over the top, resulting in one of his best performances to date. Kate Winslet also proves to be the perfect choice for Clementine, bringing the necessary amount of spark and honesty to her important role. Although slightly more buried in the background, Mark Ruffalo and Kirsten Dunst are also noteworthy (as is Elijah Wood, who has thankfully avoided typecasting after his Lord of the Rings role). The film's creative blend of music is another highlight---though it's no surprise, given the director's experience with music videos. Last but not least, the film is absolutely bursting with creative visual effects and set designs, something of a trademark for director Gondry. First-time viewers will do more than one double-take, while those who've seen it multiple times may still be caught off guard.

With all of these positive elements, it should come as no surprise that Eternal Sunshine of the Spotless Mind was one of my favorite films of the year, and a true cinematic breath of fresh air. It's not your typical romantic comedy, to be sure...but if you've seen what passes for "romantic comedy" these days, this proves to be its greatest strength. It's a rare film that's equally enjoyable with that special someone...or all by yourself.

Anyway, enough gushing. After a short run at the domestic box office, Eternal Sunshine of the Spotless Mind has been rushed to DVD courtesy of Focus Features (and Universal, of course). It's a solid DVD effort that doesn't necessarily knock one out of the park, but it's a respectable treatment for a deserving film. With that said, let's see how this one stacks up:

Quality Control Department
Video & Audio Quality:
Although Eternal Sunshine of the Spotless Mind didn't have a huge budget, it's a visual knockout that translates well to a home theater presentation. The film's 1.85 anamorphic widescreen transfer isn't perfect, but it's just as good (if not better) than the theatrical presentation. A mild coat of grain is present throughout, giving the film a slightly hazy quality, but this isn't distracting or ugly in any way. The chaotic color palette is also well-rendered, and the film's contrast and image detail are as good as they'll ever get. Overall, a fine visual presentation that won't disappoint.

Another highlight of this release is the terrific audio presentation, with included Dolby Digital 5.1 and DTS options (the 5.1 is also available in French). This was a major step up from the theatrical presentation I attended (the dialogue was very muddy), and really sounded great. I chose the DTS for review purposes, but sampled the other tracks as well---overall, I'd tend to favor the DTS mix, but the 5.1 is a great alternative. Both mixes offer terrific ambience and a surprisingly detailed atmosphere, and the film's wonderful music also shines.

For such a visually creative film, I was hoping for a more inventive presentation overall. Seen below at left, the menus are static with no sound or music, but at least they're nicely laid out and easy to navigate. Packaging is also slightly lackluster; although the cover image is nice, it's a little text-heavy. Although I'm probably dreaming here, I would have much preferred the eye-catching "magazine ad" promotional artwork (and I've got the poster to prove it!). An advertisement for other Focus Feature releases has been included instead of a typical insert. The 108-minute film has been divided into 20 chapters, with a layer change near the 60-minute mark. Optional English subtitles have also been included. 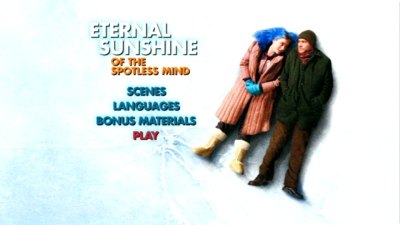 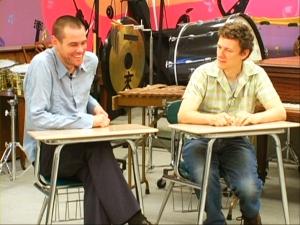 There seemed to be a fairly standard mix of "art house film" bonus features here, leading off with an Audio Commentary with Michel Gondry and Charlie Kaufman. Although it would have been nice to hear an alternate commentary with the cast, these two did a great job of shedding light on the film's conception and execution. As long-time collaborators, Gondry and Kaufman seemed very comfortable during this track (although Gondry's French accent takes a little time to get used to). Among other topics, they discuss choosing the cast, production difficulties, and even the film's wonderful soundtrack. Overall, it proved to be a very interesting commentary that fans of the film won't want to miss. Next up, we have a brief behind-the-scenes featurette entitled A Look Inside Eternal Sunshine of the Spotless Mind (12 minutes). Although it occasionally drifts into "fluffy promotion" territory, it's nice to hear personal experiences in the cast and crew's own words.

Slightly more involving is A Conversation with Jim Carrey and Michel Gondry (16 minutes, above right), a nice chat about the relationship between the director and the star. Seen above, the two go into a bit more detail about their experiences working with each other and the rest of the cast. Not surprisingly, Carrey tends to do more of the talking, although he thankfully doesn't revert into the cartoon character we're familiar with. Also here are a series of Deleted Scenes (7 minutes), a modestly interesting handful of segments. Unfortunately, they're not organized in any way, and seem a little tacked-on. Next up is Light & Day, a music video by The Polyphonic Spree (3 minutes), as well as the Lacuna Commercial seen in the film (1 minute). Strangely enough, the film's trailer is absent, although a TV Spot kicks off the first featurette. Overall, I enjoyed the majority of the special features, but they could have dug a little deeper; for one, I'd have loved to see some storyboard and promotional art galleries, or a more in-depth look at the film's visual effects.

There's no doubt that Eternal Sunshine of the Spotless Mind is a truly unique film, and the DVD treatment does a good job of supporting it. With a great technical presentation and a decent little assortment of special features, it's a solid release that you won't want to pass up. Although it's not quite "DVD of the Year" material, this is one of the better treatments for a film criminally overlooked at the box office. By all means, hunt this one down and enjoy it. Highly Recommended. 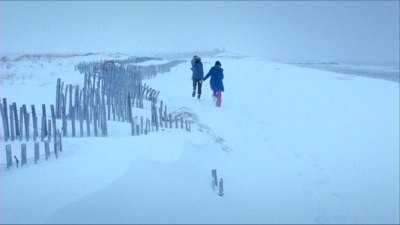