Popeye's Voyage: The Quest for Pappy 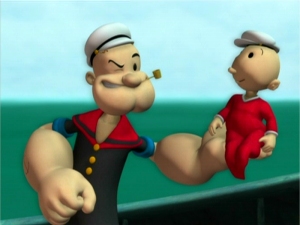 You know, CGI is a lot like traditional special effects. When done right (and sparingly), it can really add a new and exciting layer to a film. When misused, however, it can completely ruin the whole thing. Although CGI is hardly a new concept, an increasing number of films have begun to make use of it in varying degrees: some have yielded terrific results (Shrek, Pixar films, etc.), while others have floundered in the water (Garfield, Final Fantasy: The Spirits Within). While it's obvious why films like Finding Nemo are perfect for CGI (or even traditional hand-drawn animation), the use of CGI in general has been a little excessive as of late. Here's my take on it: CGI animation, like regular animation, exists for one main purpose: to create things that aren't possible in real life.

Case in point: Popeye, everyone's favorite sailor, is a cartoon through and through. He's an icon of the funny papers, and has been since his creation roughly 75 years ago. His trademark forearms and superhuman, spinach-sustained strength have no place in the real world...although Robin Williams tried, God bless him. From the long-running comic strip to the classic cartoons of decades past, Popeye has always held his own in two dimensions.

When I learned that he was making the jump to CGI in Popeye's Voyage: The Quest for Pappy, I was extremely skeptical (to say the least). After all, the concept wasn't broke, so it didn't need to be "fixed". I imagined the worst: horrible artwork, different voices, or even (shudder) an "extreme" update for the MTV2 generation. With great apprehension, I nervously placed it in my DVD player. I cautiously pressed 'play', nearly ducking for cover. And you know what?

I actually LIKED it! Yippee! 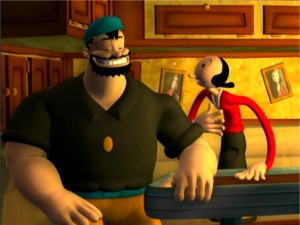 For starters, I was pleasantly surprised with the artwork style in general. Sure, I've seen better animation and smoother textures elsewhere, but Popeye's transition from hand-drawn animation to CGI was about as smooth as I've seen in recent memory. Character models were well done, and were both accurate and nicely rendered. From the rubber-band mannerisms of Olive Oyl to the madcap, spinach-induced rage of the squinty sailor himself, it was great to see that such an icon of the animation industry wasn't ruined during a routine facelift.

The story itself proved to be relatively simple, speeding by nicely in just under 45 minutes. After waking from a dream about his long-lost Pappy being in danger, Popeye heads out to sea to rescue him. Along for the ride is Brutus, his first mate, and the rest of the gang climbs aboard one way or another (yes, even Wimpy). The problem is, the Sea Hag is out to spoil the rescue, and devises several plots to turn the crew against one another. In fact, the only part of the story that seemed tacked-on was that the whole thing apparently took place during Christmas. It's not exactly full of holiday-related subplots, which makes it seem more like a marketing afterthought than anything else. Written by Paul Reiser (yes, that Paul Reiser) and Jim Hardison, The Quest for Pappy is hardly a bold new direction for Popeye, but it's still a simple and charming story that might just entertain more than the kids.

Along with the new artwork comes a new batch of voice talent, and The Quest for Pappy certainly boasts a great cast. The standouts are Billy West (Futurama, Ren & Stimpy) as Popeye and Pappy, and Tabitha St. Germain as Olive Oyl and Swee'Pea. Although it's nice to sea Kathy Bates one the list (who handles the voice of the Sea Hag), she doesn't seem to have the menacing, over-the-top nastiness that most fans might be familiar with. Still, this is a great effort that really took me by surprise, and I'd easily recommend The Quest for Pappy to interested parties and doubters alike. It's a well-intentioned effort that really came together nicely, and one of the better CGI efforts based on classic cartoon characters. 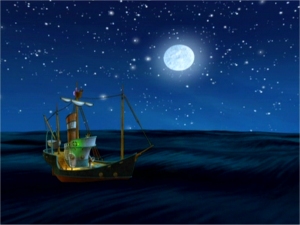 After airing on TV earlier this year, The Quest for Pappy has made a quick turnaround to DVD. Produced by Lions Gate Entertainment, it's a decent disc that provides a passable technical presentation (with one glaring problem) and a nice little mix of extras for kids of all ages. Sure, it's not as loaded as your average Pixar disc, but this release provides a nice amount of quality entertainment for a pretty reasonable price. Best of all, I'm certain that the kids won't be the only ones that will get a kick out of this one. With that said, let's see how this one stacks up, shall we?

Quality Control Department
Video & Audio Quality:
Okay, let's get the glaring problem out of the way first: this disc a pan-and-scan version of its original 1.85:1 widescreen aspect ratio. Even worse, it doesn't look like a widescreen version is available, period. Here's the really strange part, though: several of the bonus features (including the trailer!) are presented in widescreen. It's beyond me why Lions Gate would only opt for a pan-and-scan release, but them's the breaks. Although the compositions don't appear to be affected greatly by this poor decision, it's always a shame when artwork is chopped up to please the aspect ratio-challenged. Regardless, the image quality is quite pleasing, with no major compression issues or noticeable edge enhancement. Colors are bold, and image detail is very high. If this was presented in anamorphic widescreen, it'd be a near-perfect translation. As it stands, it's a attractive-looking hack job.

The Dolby Digital 5.1 Surround mix is a good effort, though it's not as immersive as it could have been. While the music sounds great and the dialogue is perfectly clear, most of the "high seas" atmosphere is confined to the front channel. It would have been great to hear a more detailed atmosphere during these scenes, but I can't complain overall. The audio presentation gets the job done, and will likely please all but the most picky ears. Just for the record, English subtitles have been provided (and I love how they correct Popeye's trademark butchering of the English language). 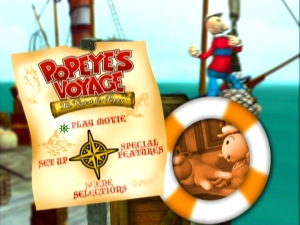 The overall presentation was a real highlight, especially the terrific animated menus. Smooth navigation and simple layout made them easy to use, and the well-rendered artwork set the proper tone. The 44-minute film has been divided into 12 chapters, and no layer change was detected during playback. Bonus features are presented in fullscreen and non-anamorphic widescreen formats. Packaging was very basic, consisting of a standard keepcase and a few promotional inserts.

Although the extras don't exactly go on forever, there's a nice variety of stuff for the whole family. My favorite inclusion is a series of four 1960s-era Classic Popeye Cartoons, and one of them even ties in nicely with the story itself (thematically, at least). The short in question is "Spinach Greetings" (seen below), which revolves around a Grinch-like plot by the Sea Hag to ruin Christmas for Popeye and company. The other shorts ("Popeye in the Grand Steeple Chase", the very odd "Valley of the Goons" and "William Won't Tell") seem a little tacked-on, but it's always nice to see classic cartoons on DVD. All three seem to be in reasonably good condition, with accurate colors and only a mild amount of dirt and scratches. Each 6-minute short is presented in English or Spanish 2.0 Stereo with no subtitles. 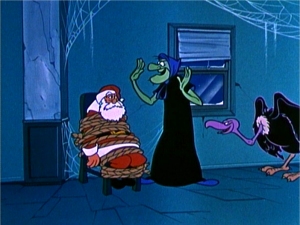 Next up are a series of Character Interviews, though they're nothing more than a few 10-second answers to text questions presented onscreen. Much more interesting is The Making of Popeye's Voyage, a brief behind-the-scenes look at the film's production. It covers a nice amount of ground in just over 10 minutes, including looks at the voice acting, character models, and words from the cast and crew. There's also a Deleted Scene presented in rough storyboard form with voice audio, as well as a very odd Trailer for Popeye's Voyage (as well as The Care Bears: Journey to Joke-A-Lot). It's a short but sweet set of bonus features that support the film, and even give younger audiences a glimpse of how Popeye used to be (back when we walked uphill to school both ways).

It's a real shame that this disc couldn't have preserved the movie's original aspect ratio, since this proves to be the only glaring error in Quest for Pappy. Otherwise, we get a surprisingly fun film with a nice little set of bonus features. All things considered, the technical presentation isn't that bad, either. If you thought Popeye would never work as a CGI film, I'd encourage you to check this one out. It's got a little something for the whole family (yes, even Grandpa!), and provides a well-rounded batch of animated goodness for your hard-earned entertainment dollar. Recommended.