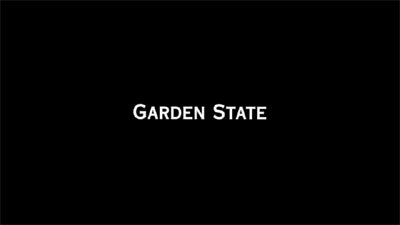 The Movie
When the trailer for Garden State first started appearing on TV and at the theater, I got the same feeling I had when I first saw the preview for American Beauty. I felt that this would be a movie that blended comedy and drama flawlessly, while telling its tale with a distinct visual flair that made art out of individual frames, but not sacrificing substance for style. When I finally sat down to the watch the film, I found my expectations to be a bit lofty (not every film can win an Oscar (especially with just one awarded each year)), but overall, I wasn't disappointed. Garden State delivered another entertaining spin on suburban ennui, while being original in its own way, thanks in large part to writer/director/star Zach Braff.

The story at play is nothing tremendously original, but then, American Beauty owed much to Nabakov in many ways. Andrew Largeman (Braff) is an actor of no exceeding note, becoming best known for his turn as a retarded quarterback (a career zenith that is mentioned early and often.) When his mother dies, he returns home to his titular state, unhappy and kept comfortably numb with a cocktail of drugs prescribed by his psychiatrist father. "Large"'s world is one of disconnection, where he just exists mainly, working as a waiter, and sleepwalking through life.

Returning home, without his medication, after being away from New Jersey for nine years, he finds the same world he left, his friends stuck in the rut he ran away from. Through various editing and camera tricks, the movie puts us in Large's world, allowing us to understand how he's feeling, as he attempts to live life without the pills that have kept him going since he was 10. His friends, on the other hand, are going in the opposite direction, doing coke and X, trying to temporarily escape the life Large left behind. Though Trainspotting did cinematic drug use to a more effective level, this movie makes the experience more personal. There's a reason for Large's medicated state that explains a lot about his family. 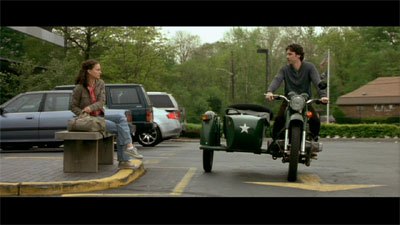 While this is Braff's movie to shine in, Natalie Portman stays with him step for step, playing a pathological liar named Sam. A ball of energy without the traditional behavioral limits people place upon themselves, she becomes the impetus for his new life. Her unique homelife and caring nature are counters to Large's cold, emotionless background, shown through a world filled with more color than Large's stark, lifeless existence. For all her troubles and faults, and there are several, her life is better than anyone's in the film. Plus, she's simply adorable, a characteristic that's key to being able to put up with her perky/quirky personality.

Braff's directorial/writing debut is, in many ways, similar to Hard Eight, Paul Thomas Anderson's first major film, in that both films seem simply too good, too polished to have been made by a first-timer. There are subtle, beautiful moments that display a tremendous amount of artistry and comedy that's better than 90% of today's films. One particular scene delivers a laugh simply through a written word and a look. While the film can find itself slipping into seriousness occasionally, especially as the loose plot comes to a climax, for the most part, Garden State is a pretty picture about redemption, what life can mean and the ridiculousness of it all.

The DVD
Packaged in a standard keepcase, this is a one-disc affair. The main menu is animated to match the film's marketing campaign, and leads to static menus for scene selections, audio (English 5.1 and Spanish 2.0) and subtitle (English, Spanish and French) options, special features and a preview for Danny Boyle's new flick, Millions. 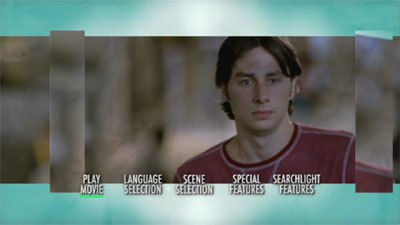 The Quality
Presented in 2.35:1 anamorphic widescreen, this movie looks quite good, an important factor for such a visual film. Color plays a key part in how the film presents the lives of its characters, and the color here is spot-on. There's a soft quality to much of the film, a soft-light look that gives it a dreamy quality. Fine details like wisps of hair and textures are visible, if not clearly defined. The audio, in Dolby Surround 5.1, isn't terribly taxing on a receiver, with mainly a front-focused sound field and center-channel dialogue. There are some audio effects that are used, but they come across just as intended. Music, a big mood-setter here, is bold, but not overwhelming to the dialogue.

The Extras
The main extras are the two commentaries, both of which feature Braff. On the first one, he's joined by Portman, in a breezy, fun chat. The two get along well, delivering some interesting banter, while Portman prods Braff for information, acting as an informal interviewer. On the second track, he talks along with DP Lawrence Sher, Editor Myron Kerstein and Production Designer Judy Becker. Obviously, this is the more technical commentary, but Braff has a good rapport with his crew, and there's a lot of joking and off-the-cuff comments, to go with some philosophy about filmmaking and behind-the-scenes info.

The two commentaries are complemented well by a 27-minute full-screen making-of featurette, titled "The Making of Garden State." A slickly produced look behind-the-scenes, it covers most of the aspects of making a movie, speaking to plenty of the cast and crew to get a good feel of what it was like working on Garden State, including craft services. A low-budget independent film is much different than a big studio picture, and this shows exactly why that is.

16 deleted scenes, in workprint quality, can be played one at a time or in one big group, with or without commentary by Braff, Sher, Kerstein and Becker. It would be rather hard to argue against these scenes getting cut out, though some subplots and jokes wouldn't have hurt the film. Because of the short nature of these scenes, the commentaries don't say much. The same could be said for the three minutes of outtakes/bloopers, though they are occasionally cute. Also included is the relatively useless Soundtrack Promo Spot, plugging for the album. 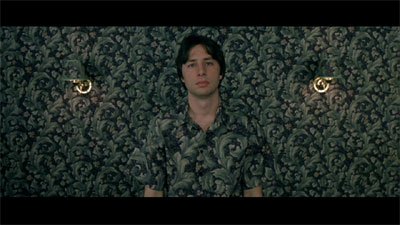 The Bottom Line
Garden State is an ambitious debut for Braff, in all three areas of his participation. And in all three areas, he acquits himself well, showing a true director's eye in composing shots, a writer's deft hand in making scenes accomplish what is desired and a thespian's ability to lose himself in a role. Of course, when you're doing all three, you can compromise with yourself. The DVD presentation isn't as expansive as one would hope for from such an interesting film, but the pair of commentaries go a long way toward filling in the blanks one might find after viewing this movie. It feels like Fox could double-dip on this one, and find more features to include, but in general, this is a solid non-special-edition disc and an easy recommendation.