The Show
Looking at the TV schedule of just about any network is like looking at an all-star stupidity line-up. With the exception of shows like "C.S.I." and "Arrested Development," most of what's on television justifies the nickname "idiot box." Shows like "MacGyver," which stars Richard Dean Anderson as the titular hero, wouldn't even make it to the air today, because the concept is too intelligent (as proven by the lack of success for the recent "Young MacGyver" pilot.) But back in its heyday, it ran an impressive seven seasons, and is still remembered quite fondly today, due to the unique resourcefulness of its star, who created the cliche of being able to build a bomb with a paper clip, candle and jar of Nutella.

As MacGyver, Anderson wasn't exactly a heartthrob, but he wasn't a bad looking guy either. The special agent who could do anything was quite resourceful with the ladies as well, earning the show a decent following and putting him just a few levels below James Bond in the realm of suave spies. Quick with a quip and his knowledge of just about everything, MacGyver couldn't be outwitted and didn't go in for the violence of some of his peers. He never carried a gun and was a role model that kids could really look up to, thanks to his reliance on science while kicking butt. With all his many facets, he was just about the perfect hero.

Coming to TV at the height of The Cold War, MacGyver had a great selection of enemies, be they communists or Arabs. The two collide in Afghanistan, which is at the center of several plots, giving viewers an interesting point of view on the series, considering the current knowledge the world has of that country. He also had a delightful crew of '80s babes, including a very young and ditzy Teri Hatcher ("Desperate Housewives") and the ever-adorable Corinne Bohrer (Police Academy 4). But the reason people tuned in was neither the girls or the bad guys. It was the unusual way that MacGyver got out of a jam with only a Swiss Army knife and the things he found around him that was the real draw. 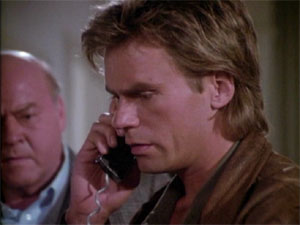 The writing, in regards to Mac's tricks, was genius, as everything was based on real science, but without certain steps, to prevent kids from blowing themselves up. When it came to dialogue, the show was actually quite silly. As far as MacGyver himself, there's far too much voice-over, and the opening adventures (of which there is one per episode) are all tied to stories from Mac's childhood, which aren't exactly enthralling. After these, it's all downhill. The female characters were written with all the depth of a damsel in distress tied to a railroad track, while the villains are all but twisting their handlebar mustaches. Enjoying the show now takes some suspension of disbelief, but the creativity put into Mac's science is enjoyable.

It's interesting to note that the direction of several of the episodes is credited to Alan Smithee, the fictional cop-out used when a director doesn't want to be known as the director of an embarrassing show or movie. For this show, it makes plenty of sense, as the weakest point of this show is the look. Stock footage is often used, to ill effect, while special effects shots, of which there are plenty, look amateurish. Almost immediately in the pilot, a green-screen effect is practically laughable. Perhaps the clarity of DVD doesn't do well by everything video.

Among the standout episodes in this set are "The Escape" (Disc 5), which has MacGyver going to jail to find a woman's imprisoned brother, "Every Time She Smiles" (Disc 4), which features Hatcher as a ditzy actress, "Target MacGyver" (Disc 3), with Mac's grandfather, and "The Golden Triangle" (Disc 1), in which MacGyver helps a village fight off a drug dealer that has enslaved them. 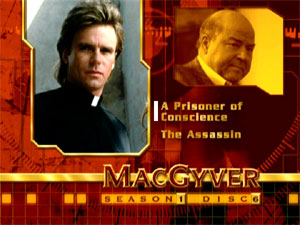 The DVDs
Paramount has released the first 22 episodes of "MacGyver" in a set of six DVDs, each packaged in a ThinPak case, which come in a cardboard slipcase. There are four episodes on each of the first five discs, and two on the sixth. Each of the discs include a simple static menu that lists the episodes, while the first disc also has previews for other Paramount TV releases. There are no audio options or subtitles, but the DVDs have closed captioning.

The Quality
The full-frame video is a mixed-bag, with some episodes looking pretty dreadful, while others simply look old. Most episodes have a hefty amount of grain and damage, including hair, scratches and dirt. The colors are washed out and dull, though the skintones are redder than they should be. Other problems with the video include color bleed on vivid reds and some slight edge enhancement. Outdoor scenes fare much worse than indoor scenes, and the many uses of stock footage look pretty bad as well. Seriously, some of these episodes look like school film-strips they are so damaged. The audio, presented in Dolby Digital 2.0, is simple and effective, reproducing the original mono presentation.

The Extras
Seeing as how this is a Paramount release, and not "Star Trek," "South Park," or "C.S.I.," it should come as no surprise that there are no extras on this set, other than the previews mentioned in "The DVDs" or the pilot episode, if you'd consider that an extra. How they can release popular series like this, or "Happy Days" without a single commentary or featurette is a continued source of annoyance for any fan of DVDs. 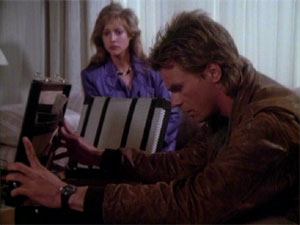 The Bottom Line
Considering that you can catch "MacGyver" four times a day, between its airings on TV Land and Spike TV, only the truly hardcore fans will need to own this set. Paramount could have changed that, simply by springing for some extras, but instead they just threw the episodes out on disc by themselves, and not exactly in great condition either. The show itself is interesting, and different from anything else out there today, but not the fun time I remembered it as, due to slow pacing and some genuinely bad acting from everyone but Anderson. Perhaps it's just dated, but a rental should tell you all you need to know.