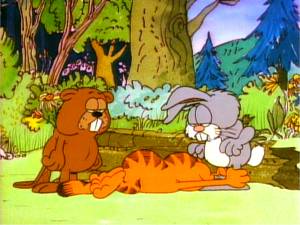 There's a lot to be said about the popularity of Garfield, the tubby orange cat who's appeared in newspapers worldwide since June of 1978. At the time, the strip was a unique concept and deserving of its time in the spotlight. Of course, the level of success Garfield has achieved over the years has been phenomenal: creator Jim Davis has built nothing short of an empire based around the character, and it doesn't look to be ending anytime the near future.

For those unfamiliar with the comic strip (both of you), the cast of characters is simple: Garfield, the fat feline, takes pride in being lazy, causing trouble, and eating everything in sight. Odie the dog is a sidekick of sorts: loveable, cheerful, and dumb as a post. Jon is the owner of the two, and leads a pathetically dull life; in short, the majority of his Friday nights are spent organizing his sock drawer. Unfortunately, these characters haven't changed much since the strip's creation.

Because of this, there are many who say that Garfield is well past his prime…and they're entirely correct, in my opinion. His 25th "birthday" has come and gone, and yet the comic strip still appears daily. It's degenerated from a once-unique concept into a watered-down parody of itself---a one-trick pony, if you will (I won't even start on the movie, so I'll save that rant for another day). Still, despite the lack of creativity in recent years, Garfield remains a popular and recognizable icon of the cartoon world. From 1982-1991, Garfield made his biggest splash on the small screen: roughly 11 half-hour TV specials were produced (in addition to the long-running Garfield & Friends) animated series, and chances are you've seen most of them. 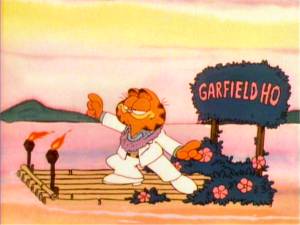 The three classic specials included here in Garfield Travel Adventures show their age at times, but there are still plenty of laughs here. In the Emmy-Award winning Garfield in the Rough (1984, seen at top), the gang heads out camping to "get some color back in their lives". With a depleted food supply and an escaped panther on the loose, it hardly proves to be a relaxing getaway.

Next up---and perhaps the one I'm the most familiar with---is Garfield In Paradise (1986, seen above) . Another vacation goes bad, leading the three on a tropical adventure that includes terrible motels and a hungry volcano. There's plenty of memorable characters here, from a heroic James Dean lookalike to a quirky tribal Chief voiced by Wolfman Jack. Plus, Jon gets some action.

The third installment, Garfield Goes Hollywood (1987, seen below), changes gears slightly. Here, we see the three competing in a local "Pet Search" talent competition, hoping to score a $1,000 prize and a trip to the Hollywood finals. While the lack of danger in this short---especially compared to the other two---makes it a strange closer, but at least there's plenty of corny animal acts. 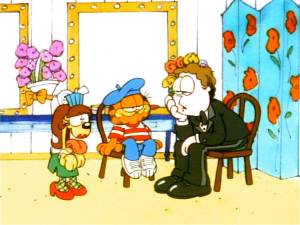 If memory serves me correctly, the only specials not accounted for on DVD at this point include Garfield: His 9 Lives and the offbeat murder mystery Babes and Bullets. There's no word about another collection in the near future, but let's hope none are left out in the cold. Back to business: in a similar fashion to prior collections, Fox Home Entertainment has packaged Garfield Holiday Celebrations as a three-episode, one-disc affair. At just under 70 minutes, it's a little short but still a great slice of 1980s goodness. The overall content is still quite watchable on DVD---despite some video problems and no real bonus material---thanks to the nostalgia factor and a reasonable price tag. Let's see how this disc stacks up, shall we?

Presented in their original TV-friendly 1.33:1 aspect ratios, these three specials could look a little better overall. There's a bit of dirt present, and some of the color and image detail is fairly inconsistent (much like early episodes of The Simpsons, only more so), but most of these problems seem to be source material issues. On the other hand, there's also a moderate amount of interlacing present here---easily spotted in every fourth frame---which causes some blurriness and jagged edges. Still, despite a few nagging concerns, this is the best these specials have ever looked.

These specials have been presented in their original Mono (a Spanish track has also been included) and sound pretty decent for their age. While some of the music is a little flat, dialogue comes through nicely and never fights for attention. The overall quality isn't anything to write home about, but it's a perfectly acceptable presentation that gets the job done. By the way, you might want to set your receiver to 'Stereo' here: while it won't add a great deal to the overall audio presentation, it certainly makes for a wider and fuller soundstage. English and Spanish subtitles have also been included. 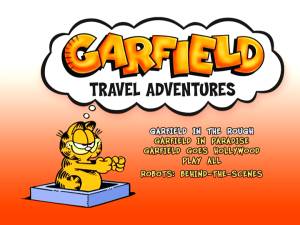 As seen above, these menus are a bit on the boring side, though the navigation is simple. All of the included cartoons are presented with their own sub-menus, including audio setup and other options. Each of these three 23-minute cartoons has also been divided into three chapters, and no layer change is present here (it's a single layer disc). The packaging is fairly standard, featuring colorful artwork and a standard black keepcase. Although I'm not surprised that an insert hasn't been included, I'm extremely shocked that there's no advertisement for Garfield merchandise.

No extras here, save for a Preview of the upcoming CGI flick Robots. While I doubt there was much to pick and choose from, it's frustating that all three collections haven't had a single related bonus feature between them (with not so much as a peep from creator Jim Davis). A real shame.

As a "movie-only" disc, Garfield Travel Adventures isn't a bad deal, featuring a few modestly-restored classic TV specials for a reasonable price. Although it's a bummer that Fox couldn't have just thrown these collections together into a more complete boxed set, it's great to see this stuff on DVD in any fashion. While I can't help but be severely disappointed about the lack of bonus materials---and mildly disappointed with the video quality---Garfield Travel Adventures is still a classic collection of cartoons that any respectable fan of animation should check out. Despite its short running time, consider this disc Recommended.