Superman: The Animated Series Volume One

Warner Bros. // Unrated // January 25, 2005
List Price: $26.99 [Buy now and save at Amazon]
Review by Francis Rizzo III | posted February 2, 2005 | E-mail the Author
In 10 Words or Less
Truth, Justice and the Animated Way The Show
I think people can generally divided into two categories: Batman people or Superman people. Either you are into the dark, gloomy and atmospheric or the optimistic and all-American. I've always considered myself a Batman guy. As such, I was estatic when "Batman: The Animated Series" hit the airwaves. An excellent portrayal of the Caped Crusader, it set a new standard for cartoons, not on in terms of the look, but also the stories. Cartoons didn't have to be made for children, but could aim higher.

So after the success of "Batman: TAS," it was only natural for Superman to get a new chance at the small screen. The creative minds behind the Dark Knight's cartoon renaissance took on Big Blue, and took him to heights not seen since the early Fleischer cartoons made him the original animated superhero standard bearer. By sticking to the character's roots, but not allowing themselves to be restricted by a slavish attention to the comic books or movies, the creators created a cartoon Superman that fans could embrace, but those without a comic-book education would enjoy as well. 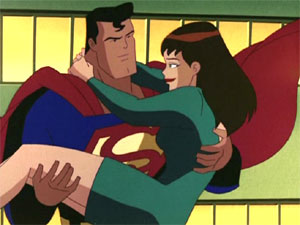 The majority of the episodes follow something of a pattern, as Supes faces a challenge from a villain, is overcome and figures out how to overcome that challenge just in time to get the bad guy before 22 minutes are over (unless it's a multi-episode story arc.) When the show shakes free those format shackles is the moment when the series shines. Episodes like the series-opening three-show "The Last Son of Krypton," "Speed Demons," which co-stars The Flash and "My Girl," which introduces the all-grown-up Lana Lang, are among some of the most enjoyable in this volume. That's not to say that the straightforward adventures aren't fun, as "Two's a Crowd" and "Fun and Games" show.

The DVDs
"Superman: The Animated Series" Volume One is delivered on two DVDs; one a single-sided disc, the other a two-sided flipper. The first disc holds six episodes, while the second disc has 12 episodes, eight on one side, four on the other. This is not a season collection, as it contains the 13 episodes from the first season, and five from the second, in production order, instead of by airdate. Packed inside an embossed, glossy cardboard slipcase, the discs are packaged in a two-tray gatefold digipack that's covered in comic-themed art from the show and episode listings. The classy animated menus are presented in anamorphic widescreen, with options for playing all the episodes, selecting just one, special features and languages, including English, French and Spanish 2.0 audio, as well as English, French and Spanish subtitles. 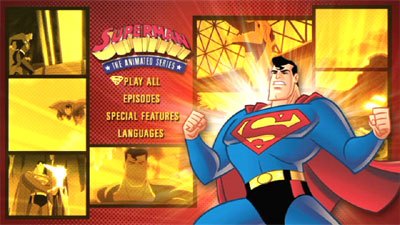 The Quality
The full-frame video looks crisp and clear, though thin black lines can pixelate as they wash out. Brighter than the video on "Batman: TAS," this series has some excellent color and nice visual effects. Occasionally, you'll find some minor dirt and stray hairs (one of which somehow made it through an entire scene without being noticed by the production team), but the damage is hardly of the distracting quality (except for that flippin' hair.)

The audio, done in 2.0 Dolby sound, sounds better than I remember it from the original broadcasts, with dialogue coming across clearly, and the sound effects reproduced nicely. The music is equally excellent, but that's only in terms of the pure quality, as the content often doesn't work, even in the opinion of the creators.

The Extras
Warner Brothers has put together a decent collection for this set, relying heavily on the show's creators for the bonus features. What they got ended up with are four audio commentaries, one text trivia track and a pair of featurettes, all of which do a fine job of revealing how the show came together.

The commentaries, found on "The Last Son of Krypton, Part One," "Stolen Memories," "The Main Man, Part Two" and "Tools of the Trade." feature (in different combinations) writer/director/producer Bruce Timm, writer/producer Paul Dini, writer/producer Alan Burnett, director Dan Riba, producer Glen Murakami and director Curt Geda. Timm, Dini and Murakami, three of the "Batman: The Animated Series" creators, are on all three tracks, which have a fun, friends-getting-together feel. The group drops plenty of information regarding the development of the show, including the title sequence, character inspirations and dealing with Superman's history. There's also a tidbit about one of the characters' sexuality that was interesting to find out. For fans of the show, these commentaries are informative and entertaining.

Unlike the usual DVD trivia track, which takes the form of a subtitle track, laying info over the picture in whatever font chosen, the Pop-Up Trivia Track for "A Little Piece of Home" is actually an entirely separate video track. A nicely-designed set of boxes swoop onto the screen with a flying sound effect, displaying information about the series, the episode and Superman's media history. Admittedly, most of the information isn't Trivial Pursuit-level, but the track is interesting enough to get a second viewing out of the episode.

The featurettes are of a decent length, clocking in at around nine minutes each. On the first side of the second disc is "Superman: Learning to Fly," which is a general overview of how the series came together and the challenges the team faced in writing and designing the show. Interviews with most of the main crew give an inside view of the show that's a bit deeper than your usual EPK material. The second featurette, found on the second side of the second DVD, takes a look at the people in Superman's life. "Building the Mythology: Superman's Supporting Cast," follows the same structure as "Learning to Fly," but breaks down the characters that round out the show. The info here is relatively common knowledge if you've watched the show, but the presentation is well-done.

There are also three trailers included, one for each of the two DVD volumes of "Batman: TAS" and one for "Challenge of the Super Friends." 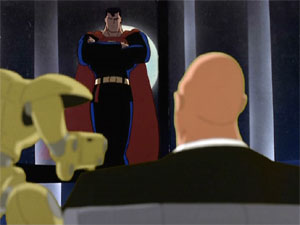 The Bottom Line
For a fan of "Batman: TAS," this show seems like something of a step down, thanks to the stripped-down animation and less serious storylines. But when you consider the character, the style and stories are much more fitting for Superman, a simpler, less complicated hero whose tales lean more toward punch-outs than puzzle-solving. The first 18 episodes set a fun and exciting pace for the series, and this DVD complements them with a set of informative and entertaining extras. For any Superman fan, this is an easy recommendation, while animation and comic fans should take at least a look at this set.