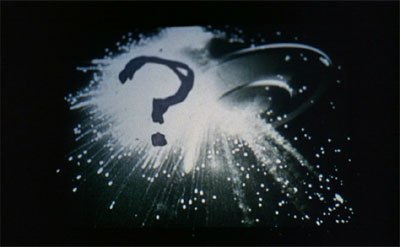 The Movie
Mention Orson Welles and Citizen Kane is usually the first thing that pops into many people's head. Touch of Evil, "War of the Worlds" or even The Transformers: The Movie might be up there too. But not F for Fake. That's partially because it was barely released in America, and also because it's not a movie like anything he (or anyone else) did before. In its construction, it defies categorization.

To make F for Fake, French director François Reichenbach's documentary footage of famed art forger Elmyr de Hory was re-edited by Welles, a master in the cutting room, and combined with an array of footage he shot (along with a few other sources) to create something of a public personal conversation about hoaxes, fakes and deception, with a man well versed in those arts. At the time of Welles' production, the author of a book on de Hory's forgeries, Clifford Irving, was exposed for faking an autobiography on Howard Hughes. Throwing in his own history as a charlatan, Welles had the perfect three legs for the film to stand on.

With these three stories, Welles' constructs layers of lies while revealing a great many truths. A self-confessed bender of the truth, he's a faker, telling the story of a faker, who told the story of a faker. There are rules about double negatives, but how about triple? Does that negate everything? Not at all, as by delving into the falsehoods, the basest of human realities are put under Welles' microscope and revealed in the truest of lights. 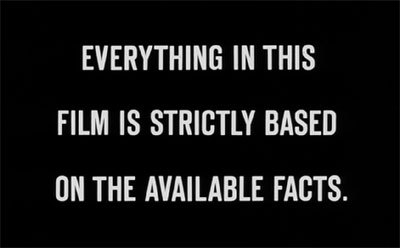 The look of the film is unique and extremely creative, playing with the concepts of film, video and television, pulling whatever Welles' needed from each medium; anything that made the way his story was told better. The ideas of truth and fiction are also toyed with, preventing the audience from feeling entirely comfortable with any fact presented to them. In many ways, that's the key to the story and its assault on experts and whether their presence dictates the existence of fakes, or vice versa.

As much as the visuals and techniques are important to the film, it's the subtleties that are most impressive. Consider, Welles' swears to the viewer that he's telling the truth...while dressed as a magician. Verbal slight of hand, perhaps? There's also the matter of the word play that goes on throughout the film, supported by small visual clues that go by the eye without registering on a conscious level. Watch every word you see--a rule for life, as well as this movie.

Though the film is easily the work of a genius and is informed with a sense of fun and energy, this is not a movie everyone will enjoy. In truth, it's almost like a prank being pulled on the viewing audience, who are at Welles' mercy for the length of the film, as they are likely to approach the material the way they would approach any documentary, only to learn it is unlike any documentary. If you can ally your way of thinking with Welles', you will have a much better time with this film.

The DVDs
Criterion presents F for Fake on two DVDs, packaged in a double-width keepcase. Included in the package is a 16-page booklet (see The Extras for details.) The menus, for some reason, are in full-frame, instead of anamorphic widescreen. The scene selection menus feature text lists of titles for each chapter of the film, while the special features are listed on the main menu of each disc. Subtitles are available in English, and color bars for adjusting your set are found in the final chapter of the film. 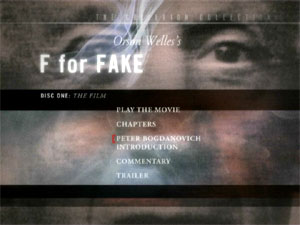 The Quality
The video is presented in anamorphic widescreen, in a 1.66:1 aspect ratio. The image is all over the scale in terms of quality, as Reichenbach's material pales on comparison to Welles' footage. Most of the scenes Welles' shot are vivid and crystal, with good hard edges, high detail and very good skin tones, while Reichenbach's original film is grainy and aged. There are some scenes, such as the restaurant "lecture" by Welles, that are less impressive, but they feel like attempts to blend the two sources. Overall, a very nice presentation.

The audio is presented in mono, and comes from the center speaker in your surround sound system. The dialogue is reproduced without distortion and the mix is very good, while the sound is bold.

The Extras
The first disc has a couple of interesting bonus features, but the bulk of the extras are on the second disc. The disc opens with an introduction by filmmaker Peter Bogdanovich, a friend of Welles. Brief but informative, Bogdanovich talks about the movie, Welles, his own involvement in the film and what F for Fake means to him. For a newcomer to the film, it's a good table-setter before hitting play on the main feature.

Next up is a feature-length audio commentary with Welles collaborator Oja Kodar and F for Fake cinematographer Gary Graver. The track is edited together to include the separately recorded participants, leaving just bits of dead air, while covering several areas of interest related to the movie, including production stories and reflections on the themes in the film. Kodar's Croatian accent is hard to grasp at first, but it becomes easier to understand as the track progresses. Both commentators bring a lot of information and thought to the recording, and their level of connection to the film is evident in the commentary's energy.

A nine-minute trailer for the film is also on Disc One, which stands as both proof of Welles' genius and his complete lack of understanding of the commercial aspects of film. This trailer is unwieldy in every way, and wasn't seen in theaters, but in loaded with the same convention-flouting skill seen in the feature. The footage is in very bad shape, but the concept is unique and creative.

Disc Two opens with the 1995 feature-length documentary, Orson Welles: One-Man Band. Focusing on the director's later years, an era dominated by false starts and bad luck, the film is a look at what a more studio-friendly Welles could have completed, but which instead sits stillborn of the master's mind, including the completed, but unreleased The Other Side of the Wind. The scope of material covered is impressive, showing in good detail one of the more fascinating aspects of his career, that being his willingness to do just about anything for a dollar, in order to finance his more artistic endeavors. For the Welles completist, this is an absolute necessity, and should intrigue any lover of the cinema, especially with the rare look at Welles' sense of humor.

1997's Almost True: The Noble Art of Forgery, a 52-minute documentary on de Hory , approaches the topic in a much more straight-forward style than F for Fake. In comparison to Welles' work, it's very dry, coming across as something you might see on PBS one Sunday afternoon. Despite that, it's a very good companion piece to the film, as it explains de Hory in more detail and truthfulness.

A profile on Clifford Irving, done as a Classic Update on "60 Minutes 2" brings the info on the faker up to date, at least as of 2000. Starting with clips of Irving's first appearance on the show in 1972, the almost nine-minute segment with the 70-year-old man gives him a chance to come clean on his lies and gives more understanding to what is seen in Welles' movie.

The final extra on the DVD might be the most interesting, as it holds the audio answers to reporters' questions from famous recluse Howard Hughes, as presented over the phone in the original press conference. Presented as a series of text screens, the questions are written, and Hughes' responses are heard after pressing the play option. There are 14 clips in all, covering the book and his reclusive life, including the rumors about his physical appearance. The quality of the audio is very impressive.

Included with the discs is a 16-page booklet, with an essay about F for Fake by film critic Jonathan Rosenbaum, along with info on the DVD materials and credits. The essay, written by someone who knew Welles, puts the film into the context of Welles' filmography, as well as that of the documentary genre, while the booklet is well-designed and classy. 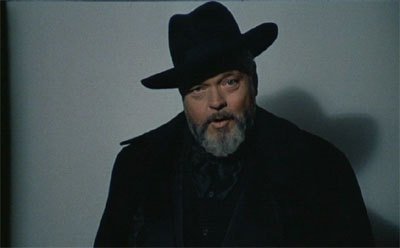 The Bottom Line
As movies become more and more safe, and more and more simple, the chances that we will ever see another film like F for Fake become slimmer than slim. That's unfortunate, as this is the kind of personal filmmaking that could save American cinema from its current commercial spiral. Perhaps Steven Soderberg, the most likely suspect to turn a film on its ear, can pick up the torch. If he sees this DVD set, he might possibly do that, as it provides the blueprints for the entire world of F for Fake, from the inspiration to the production to the finished product. Criterion has once again taken a film that might otherwise be forgotten, and made it relevant through smart supplements and a top-notch presentation. Welles aficionados and fans of the unlimited possibilities of film need to check this DVD out.