With a haunting atmosphere and unusual style of storytelling, Cristoffer Boe's Reconstruction (2003) may very well be a film you'll love and hate at the same time. This Danish import certainly has a lot of things going for it, though: a fine pair of lead performances, striking visuals and an interesting premise are only a few highlights. So why did I have a hard time enjoying it? Was it the clumsy voice-over narration that opened and closed the film? Was it the distracting overuse of an already overused musical piece (in this case, Samuel Barber's Adaggio for Strings)? Was it the sinking feeling that nothing was really accomplished---whether intended or not---after the film ran its course?

First, though, let's start from the beginning.

The concept of Reconstruction is quite simple at first: basically, it follows two Danish couples through their faltering romances. Alex David (Nikolaj Lie Kaas, above) and his girlfriend Simone (Maria Bonnevie) are young and sometimes in love, but Alex has a constant tendency to push away loved ones---not always Simone, but his father as well. Alex is captivated with a young blonde named Aimee (again, Maria Bonnevie), the wife of author August Holm (Krister Henriksson), and quickly pursues a relationship. Well, maybe just sex.

[Spoiler Warning] Here's where it gets interesting: After a strange scene where his apartment suddenly "vanishes", his life is further twisted when his friends, family, and even Simone fail to recognize him. It's not actually revealed at the film's end, but here's my take: Alex appears to be nothing more than a metaphor, a character in August's latest romance novel. One possibility: Aimee's "affair" with Alex could have been based on her real-life affair with another man, so August could simply be writing about his failing marriage. Another scenario: August simply wants to be a young man again, so he creates Alex as an alter ego for himself and an emotional escape route. Either one is concrete proof that Reconstruction is far from your average romantic drama. [End Spoiler]

The main problem with Reconstruction isn't really the story, but the way the story is told. It's chopped up, fragmented and served cold, often times leaving the viewer scratching their head in confusion---even during situations where things could (should?) have been spelled out a bit more. Don't get me wrong: I'm not a person that always wants everything tied up neatly at the end of a film, but the disjointed sequence of events seen in Reconstruction seem more manipulative than anything else. We're supposed to care about these characters, but there's no solid background to flesh them out. Long story short: Reconstruction isn't an easy film to snuggle up with. The story's core themes are extremely open to interpretation, resulting in either a wonderfully strange head trip or an aggravating mess. For this viewer, it was a little bit of both.

It's not often that so many positive and negative elements collide during a film, though it all but ensures that Reconstruction is often a captivating effort but not always a satisfying one. Films like Lost in Translation or In The Mood For Love share similar themes of companionship and loneliness---where atmosphere is favored over a detailed plot---but they're confident without feeling nearly as heavy-handed. Still, perhaps the film's impact may become more fully realized with multiple viewings; just for the record, I viewed it twice and found a few more subtle character moments to appreciate the second time around. Not necessarily enjoy, but appreciate.

The DVD treatment from Palm Pictures is good, but not spectacular. Though foreign films rarely get equal treatment here in Region 1 territory, I'd imagine the studio got about as much as they could out of this release. The film's low-budget origins are immediately noticeable despite a good technical presentation, with the related bonus features being sparse but somewhat helpful. The total package is certainly not blind buy material, but there's enough here to warrant a a closer look.

Video & Audio Quality:
Presented in its original 2.35:1 anamorphic widescreen transfer, Reconstruction is grainy but visually attractive. I'm not certain whether the film was shot on digital video or 16mm---though I'm guessing it's the former---but it's not a slick and polished look that the director was going for. The color palette is generally muted (typical for most European films) and image detail and contrast are quite good, even during darker scenes. It's a relatively clean and clear transfer whose visual style may take a little time to get used to, but it's a fine effort nonetheless.

The 5.1 Surround Sound presentation (in Danish and Swedish, with optional English subtitles) is mostly straightforward but opens up nicely on ocassion. Music cues are mostly channeled up front but are still quite enveloping, though it's mostly a dialogue-driven affair. The only scene with a real "punch" (a short meeting between Alex and his father) is roughly a minute long, but don't let the lack of a fuller presentation hinder your evaluation of the film. It sounds as clean and clear as it needs to. 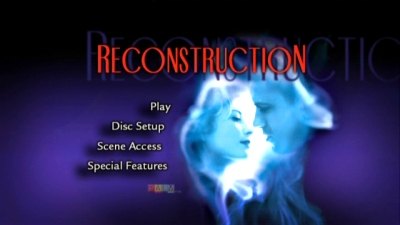 The film's ending theme plays over the animated, easily navigated menu designs. This 88-minute film has been divided into 18 chapters, and no layer change was detected during playback. The packaging is simple and classy, as this one-disc release is housed in a standard clear keepcase with attractive artwork on both sides of the glossy cover stock. No inserts have been included.

A trio of Interviews comprise the bulk of the bonus material, featuring stars Nikolaj Lie Kaas (10 minutes) and Maria Bonnevie (7 minutes), as well as director Cristoffer Boe (12 minutes). These interviews are as stylized and abstract as the film itself: they're not especially useful in helping to make sense of everything, but it's nice to hear the comments from each participant. There's also the film's US Trailer, which incorrectly advertises the film as a fast-paced pyschological thriller (it's psychological, but not always fast-paced and thrilling), so don't watch it beforehand or you'll wind up disappointed. Lastly, there's a few Previews and Weblinks to the DVD's official site.

I didn't necessarily love or hate Reconstruction in hindsight, but it certainly wasn't what I was expecting. I'll give it this: despite the problems I had with the film, there were enough interesting elements to keep the viewer guessing---even the second time through. The DVD presentation by Palm Pictures is good, but a subtitled audio commentary or more informative interview with the director or cast would have made a world of difference. It may not be enough to make Reconstruction a recommended blind buy, but it's still worth a weekend look. Rent It.