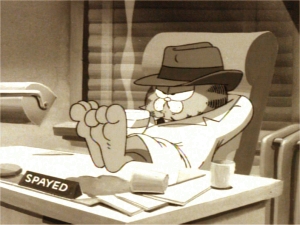 There's a lot to be said about the popularity of Garfield, the tubby orange cat who's appeared in newspapers worldwide since June of 1978. At the time, the strip was a unique concept and deserving of its time in the spotlight. Of course, the level of success Garfield has achieved over the years has been phenomenal: creator Jim Davis has built nothing short of an empire based around the character, and it doesn't look to be ending anytime the near future.

For those unfamiliar with the comic strip---both of you---the cast of characters is simple: Garfield, the fat feline, takes pride in being lazy, causing trouble, and eating everything in sight. Odie the dog is a sidekick of sorts: loveable, cheerful, and dumb as a post. Jon is the owner of the two, and leads a pathetically dull life; typically, Friday nights are spent organizing his sock drawer. Unfortunately, these characters haven't changed much since the strip's creation.

Because of this, there are many who say that Garfield is well past his prime…and they're entirely correct, in my opinion. His 25th "birthday" has come and gone, and yet the comic strip still appears daily. It's degenerated from a once-unique concept into a watered-down parody of itself---a one-trick pony, if you will (I won't even start on the movie, so I'll save that rant for another day). Still, despite the lack of creativity in recent years, Garfield remains a popular and recognizable icon of the cartoon world. From 1982-1991, Garfield made his biggest splash on the small screen: roughly 11 half-hour TV specials were produced---in addition to the long-running Garfield & Friends animated series---and chances are you've seen most of them. 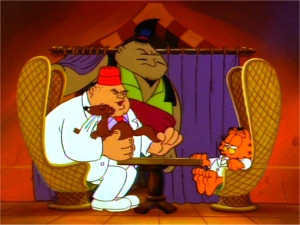 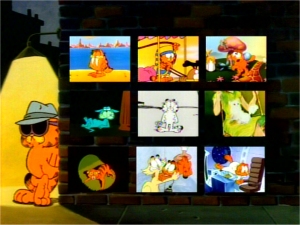 The last of these specials are presented in Fox's fourth and final collection, Garfield Fantasies---it's perhaps the strangest of the four, but the oddball nature of these adventures makes for an interesting watch. First up is Babes and Bullets (1989, at top), a black-and-white murder mystery starring Garfield as Sam Spayed, P.I. After the death of the beautiful Tanya O'Tabby's husband, Spayed makes the rounds with the usual suspects---including his own squeeze, Kitty. It ain't exactly Sin City here, but this amusing caper is one of the best of the bunch.

Next up is Feline Fantasies (1990, above left), which follows Garfield floating through the day during a series of daydreams. Fantasies is one of the most non-linear shorts of them all, capturing Garfield and company in a variety of settings and time periods. There's a bit of everything here: some Western action, a deep-sea adventure, and even an Indiana Jones-meets-James Bond segment featuring Garfield and Odie as Lance Sterling and Slobber Job. The free-form nature of these situations really makes modern Garfield strips pale in comparison.

Okay, I'll take it back: the third inclusion, His Nine Lives (1998, above right) is so strange it's practically a bonus feature. It's a bit different from the other shorts: at roughly double the length (48 minutes), Nine Lives is a guided tour throughout Garfield's earlier "incarnations". From pre-history through Ancient Egypt, we also see Garfield in a trippy storybook world, as "Stunt Cat" and even as a lab animal. This autobiography of sorts originally appeared as a book---like many of the other adventures---and plays out equally well in animated form. All things considered, it's a mind-bending trip and a strangely appropriate way to end this final collection.

Along with Garfield as Himself, Holiday Celebrations and Travel Adventures, these four discs conclude the complete run of these classic specials. In a similar fashion to the other three releases, Fox Home Entertainment has packaged Garfield Fantasies as a three-episode, one-disc affair (though a full-blown boxed set would have been much better). Even with the double-length Nine Lives, this disc is only a small---but memorable---slice of 1980s goodness. The overall content is still quite watchable on DVD, despite a questionable technical presentation and absolutely no real bonus material. With that said, let's see how this disc stacks up, shall we?

Presented in their original TV-friendly 1.33:1 aspect ratios, these three specials look good but not great. There's a bit of dirt present, and some of the color and image detail is fairly inconsistent (much like early episodes of The Simpsons, only more so), but most of these problems seem to be source material issues. On the other hand, there's also a moderate amount of interlacing present here---easily spotted in every fourth frame---which causes some blurriness and jagged edges. Still, despite a few nagging concerns, this is the best these specials have ever looked.

Presented in their original English Mono (a Spanish track is also included) these specials sound decent for their age. While some of the music is a bit flat, dialogue comes through nicely and never fights for attention. The overall quality isn't anything to write home about, but it's a perfectly good presentation that gets the job done. By the way, you might want to set your receiver to 'Stereo' here: while it won't add a great deal to the overall audio presentation, it certainly makes for a wider and fuller soundstage. English and Spanish subtitles have also been included. 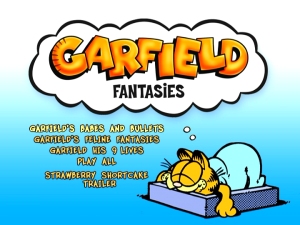 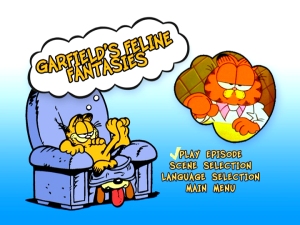 While these menus are a bit on the boring side, at least the navigation is simple enough. All of the shorts are presented with their own sub-menus (seen above), including audio setup and other options. Each of these three 23-minute cartoons has also been divided into four chapters, with no layer change detected during playback. The packaging is also fairly straightforward, as this one-disc release is housed in a standard keepcase with no inserts or (gasp!) advertisements.

No extras to speak of here---save for a Preview of Strawberry Shortcake on DVD, of all things. Given the absence of bonus features on all four of these collections, it's surprising that creator Jim Davis couldn't have sat down for an interview or commentary during some of these shorts. I know there probably weren't tons of vintage clips to pick and choose from, but the complete lack of new stuff is pretty disappointing. The main features are entertaining enough to get by on their own, but the disc's low retail price is really its only saving grace.

Though a complete chronological boxed set may have been more to the point, at least we've finally got all of these classic shorts on DVD. I can't say that the technical presentations are as good as they could have been---and the total lack of bonus features is disappointing---but they're still a decent buy at $15 a pop. While it's certainly a much stranger lineup than normal, Garfield Fantasies is a creative collection of cartoons that animation fans should really enjoy (and not just for nostalgia's sake). If your only memories of Garfield are the dull, repetitive strips of recent years, give the disc a good spin and you'll be surprised. Recommended.