Jerry Bruckheimer Films doesn't have many family movies under its belt, but you can bet that National Treasure is a step above Kangaroo Jack. Offering a fun, light-hearted adventure in the vein of Indiana Jones---with a few pages taken from Dan Brown's recent bestseller, The DaVinci Code---National Treasure is a fast-paced hunt through the caverns of American history. It's not always believable every step of the way: most movie-goers might roll their eyes as Benjamin Franklin Gates (Nicholas Cage) easily blows through clues that would stump some of the most ardent history buffs. There's also some basic flaws along the way, including a few unnecessary characters and an overbearing score. Still, the film's charm makes it worth a look for anyone fascinated with all things hidden; fact or fiction, it's one of the breezier 120-minute rides around.

National Treasure sweetens history to make the story more interesting, so don't go looking for an education. It follows the adventures of the aptly-named Benjamin Gates---a middle-aged man from a long line of treasure-hunters---who's been following a seemingly endless string of clues leading to a legendary stash of artifacts and wealth. Legend has it that the Knights Templar (who eventually became the Freemasons, of which many of America's Founding Fathers were members of) had amassed plenty, but they really kept things well-hidden. Make no mistake about it: this stuff would not be found by accident.

Somewhere down the line, a member of the Gates clan was given the secret, with nearly all successive members of the family dedicating their lives to uncovering it all. Despite the cynical nature of Benjamin's dad Patrick, the youngest Gates boy---after learning the family history from his grandfather, John Adams Gates (Christopher Plummer)---was more determined than ever. Working non-stop for the majority of his adult life, with each passing clue containing equal parts inspiration and frustration, Ben would soon discover that he was closer to the goal than he originally thought. He'd be assisted along the way by Riley Poole (Justin Bartha), a sarcastic young fella who knows much more about computers than history; historical archivist Abigail Chase (Diane Kruger); and eventually, his jaded father Patrick (Jon Voight) would even see the light.

Ben's quest centers around a possible hidden message on the back of the Declaration of Independence. He and Riley would have to steal it for decoding purposes---but they're really just trying to keep it out of the hands of Ian Howe (Sean Bean), an ex-associate of Ben's who wants the treasure all for himself. It was nice to see a more low-key villain than Hollywood usually throws at us; in all honesty, the lack of maniacal laughter was very much appreciated. The long arm of the law also makes its presence known here---headed by Agent Sadusky (Harvey Keitel)---making this treasure hunt a little more suspenseful. From clue to clue and location to location, National Treasure bounces around freely in its own world. We follow our characters from dark underground caverns to America's most famous landmarks, ensuring that if nothing else, there's plenty to see along the way.

It's already been said that Ben manages to solve some of these clues a little too easily; in many cases, viewers may be reminded of old episodes of Scooby-Doo or one of the Riddler's gags in Batman lore. If the viewer can look past the convenience of the plot advancement, though, they'll have no trouble enjoying National Treasure. Still, there's a number of elements that could have been changed to make Treasure a more memorable ride: one such element is Abigail Chase, who really serves no purpose other than the requisite damsel in distress. Perhaps the filmmakers felt the spark of romance (and eye candy) could sell a few more seats, but the additional layer is more like extra padding than an interesting side-story. The heavy hand of Bruckheimer is also felt on more than one occasion, especially in the film's overly dramatic score: while the suspenseful story frequently warrants such drama, viewers may find themselves a bit dizzy when it's all said and done. Outside of that, the film's only other major disadvantage is its limited replay value; for obvious reasons, the mystery surrounding the treasure hunt is all but lost on repeated viewings.

Despite a few glaring flaws and an unbelievable premise, National Treasure still manages to be an entertaining adventure that the whole family can enjoy---and that makes this film something of a rare gem in its own right. While most critics may not have warmed up to it during the theatrical run, Treasure still wound up as the tenth-highest grossing picture of 2004. Disney hasn't quite pulled out all the stops to really make this DVD a truly memorable effort, but the combination of an excellent technical presentation and a handful of bonus materials (with an appropriate presentation) makes this release worth a closer look. It may not be enough to really consider National Treasure a solid blind buy, but fans of the film will certainly enjoy what's been put on display here.

Quality Control Department
Video & Audio Quality:
Right on par with most modern releases, National Treasure is presented on DVD with an excellent 2.35:1 anamorphic widescreen transfer. The overall image is clean and clear, sporting an accurate color palette and only a hint of murkiness during underground scenes. Digital problems weren't a major issue, as only the smallest amount of edge enhancement and compression were detected during a few wide shots. Overall, a fine visual effort from a studio that typically excels in this department.

This disc's equally impressive 5.1 Dolby Surround mix is another highlight. Although the credits of National Treasure suggest that the original mix was in DTS, this English 5.1 track (also available in French) offers more than enough ambience for the audio enthusiast. Surround use is frequent and the film's dialogue is clear and easily understood. Although I found the music to be a bit overcooked during several sequences, it's as strong as it was meant to be in theaters. English captions and French or Spanish subtitles have been provided for the main feature only. 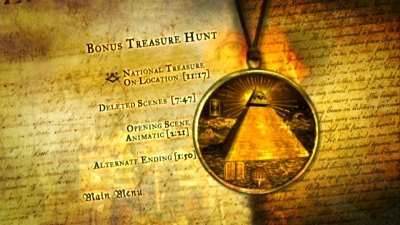 The menus are surprisingly simple but well-designed, as the animated background offers an appropriate atmosphere without revealing any major spoilers. Navigation is smooth and simple, although a more compact audio/subtitle setup would have been a better option. The 130 minute film has been neatly divided into 19 chapters, with a layer change detected near the 86-minute mark. Bonus features are unfortunately presented in non-anamorphic widescreen, though I've always appreciated how Disney DVDs typically provide the running time of each supplement. The packaging was not on hand at the time of review, but the cover art (at top) doesn't look especially promising.

NOTE: There's more buried treasure than meets the eye, but you'll have to hunt around a bit to uncover it. A guide to unlocking everything has been posted at DVD Talk's Easter Egg Database (linked at the pottom of this page), but complete descriptions can be found below. Happy hunting!

The main section begins with a short On Location featurette (12 minutes), offering a quick look behind the scenes with the cast and crew. It's much too short to really do any good, but it's nice to see an effort made. Next up are a pair of Deleted Scenes (8 minutes) with optional audio commentary from director John Turtletaub. There's also a curious Opening Animatic (2 minutes, seen below) that's rendered in basic CGI, also with optional commentary from the director. Finishing off the first section is an Alternate Ending (2 minutes) with optional commentary and an introduction by you know who. Finding the rest of the stuff requires a bit of extra effort...

...but we're also treated to the Treasure Hunters Revealed featurette (9 minutes), consisting of interviews and comments from real-life hunters and artifact collectors. Next up is a short history-based series of mini-games called Riley Poole's Decode This!---while adults may find it a little irritating, the kids should enjoy this. We follow things up with a quasi-informative featurette about The Templar Knights (5 minutes), a short history of the group that includes a few words from modern members. The narration is a bit hard to follow, but it's a worthy addition to the supplements. Next up is the throwaway Verizon Bonus, consisting of a film-related commercial and other such advertising nonsense. On the final level, there's an optional Trivia Track that plays during the film; while it's hardly a substitute for an audio commentary, it's a nice extra. There's some decent stuff overall, but it's a mixed bag depending on your age---and, like the film itself, not as fun the second time around.

It helps to turn your brain off at the door, but National Treasure earns passing marks for a night of escapist entertainment. Sure, the clues are far-fetched. Sure, the plot advancements are way too convenient. Even the film's paint-by-numbers score doesn't always fit in right. Still, it's hard to hate a such a fun, fast-paced family adventure flick that really aims to please. Disney's DVD combines an excellent technical presentation with a few nice extras (and the "hidden" presentation maintains the proper atmosphere), but this disc certainly could've had a bit more meat on its bones. National Treasure may not have enough replay value to consider it a recommended purchase, but there's enough entertainment value to keep most adventure fans happy for the weekend. Rent It.