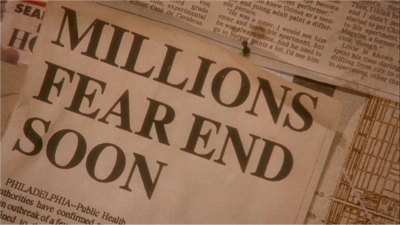 Perhaps one of the industry's most unique talents, Terry Gilliam has directed some of the most unique and compelling films of the last twenty years. He may be remembered first for pictures like Monty Python and the Holy Grail, The Fisher King or even Fear and Loathing in Las Vegas---but the cynical, off-center, science fiction-laced atmospheres of Brazil and 12 Monkeys (1995) are perhaps his most ambitious of all. The latter is hardly his most accessible film; in fact, I'm sure I wasn't the only perplexed zombie that staggered out of the theater upon my first viewing. For my money, though, it shares top honors with Brazil as being Gilliam's most complex and rewarding portrait of fear, paranoia, and "mental divergence". Featuring a terrific cast, an engaging plot, and enough mind-bending moments to warrant multiple viewings, 12 Monkeys has a little something for everyone...unless you prefer the shallow end of the pool, of course.

To divulge the entire plot of 12 Monkeys would really ruin the experience for those new to the film---and besides, it probably couldn't be done in less than 1,000 words. Here's a few hints, though: we're put inside the life of one James Cole (Bruce Willis), a prisoner from the mid-21st century who "volunteers" to return to 1996 and find out how a mysterious virus wiped out five billion people. Problem is, Cole's mistakenly sent to 1990, where even less people would believe him. Fast-forward to the mental institution, where Cole meets up with the stuttering, mildly psychotic Jeffrey Goines (Brad Pitt), a man who may or may not be involved with The Army of the Twelve Monkeys, the group supposedly responsible for the virus. Along the way, he also meets the empathetic Dr. Kathryn Railly (Madeleine Stowe) who turns out to be Goines' ex-psychiatrist. Both people have appeared to Cole in a strange dream he's been having since childhood, in which a man is gunned down in an airport while a young blonde woman watches in horror. 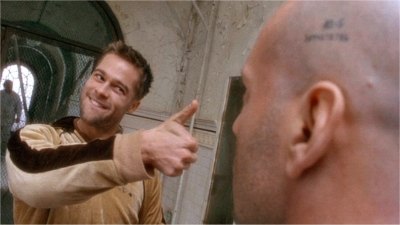 With a premise like that, it's no surprise that films like 12 Monkeys don't come around very often. Different time periods are touched upon---from the dull, drab world of the future to the chaotic events of World War I---and Cole gets the privilege of being our confused, feral tour guide. He doesn't know who to believe or trust, often acting out in sheer survival. The "mental divergence" he suffers from---often represented by a raspy voice that may or may not belong to an actual person---is with him nearly every step of the way, scolding him for his mistakes and decisions. It's one head trip after another---and to make matters worse, Cole's own dreams end up coming true. Everything comes full circle---like it or not---and history is doomed to repeat itself. Or is it?

As mentioned before, a great story can't be told without great characters---and the cast of 12 Monkeys is more than capable enough to get the job done. Bruce Willis turns in one of the best performances of his career, as does Brad Pitt (who'd just come off another terrific performance in Se7en). Madeleine Stowe is another highlight: she not only has great chemistry with Willis, but walks the delicate line of insanity quite well. Christopher Plummer doesn't break much new ground in his portrayal of Jeffrey's father, but his presence adds some much-needed weight to the role. Gilliam also has a distinct talent for finding seedy supporting characters---the "villain" in this film isn't revealed until the very end, but first-time viewers will have a hard enough time guessing. But that's just the tip of the iceberg: 12 Monkeys offers a dense atmosphere in addition to every existing strength: in all honesty, it's one of the most focused, driven films of its time. It's nearly impossible to properly dissect, but there's enough meat here to make it worth trying. 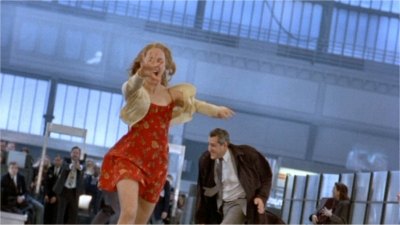 As mysterious as the film may be, its path to DVD just got a little stranger. A pair of discs were unleashed upon the world in 1998: a fully-loaded Collector's Edition and a bare-bones disc with a great DTS audio track. For their time, the original releases were quite good---very good, even. Seven years later, Universal now attempts the double-dip on one of its most underrated titles---but the results aren't as clear-cut as many fans may be hoping. This new Special Edition corrects a few things in the visual department, but the audio is roughly the same. Bonus material shares a similar fate---though the existing lineup of goodies was certainly enough to get by, I'm sure many were hoping for a few scraps of new stuff. Overall, it's hardly a double-dip to ignore---but, as in the film itself, the future doesn't always correct the mistakes of the past. To make the situation a little less confusing, comparison ratings for all three versions have been provided in each section, though this new Special Edition is obviously the focal point. With that said, let's see how this disc stacks up, shall we?

In what is possibly the most notable difference between these versions, the Special Edition has been given an all-new transfer by Universal. While the original two releases were anamorphic---and quite good for their time---their flaws can easily be seen in direct comparison. In addition to a cleaner, smoother picture, the Special Edition boasts a more accurate color palette overall (especially visible in Image #2). Grain is less evident, though the overall look of 12 Monkeys is not meant to be as smooth and glossy as most major productions. There's still a bit of dirt present---and some very mild compression artifacts, due to the amount of material here---but this is easily the best the film has ever looked on DVD. Those who view the above comparisons may also notice a very minor framing difference: it appears as if the newer version opens up the top and bottom a bit more, while shifting the image ever-so-subtly to the left. The image appears more balanced in this new framing.

It's disappointing that Universal couldn't have thrown in the DTS track for good measure, but the 5.1 Dolby Surround Sound mix present here---the same as found on the Collector's Edition, and also available in French 5.1---is nothing to sneeze at. There's a fine amount of subtle ambience, with dialogue and musical cues balanced nicely and never fighting for attention. While a completely remastered version may have improved the atmosphere slightly, most fans should be happy with this audio presentation. Still, the missing DTS mix is a real head-scratcher. 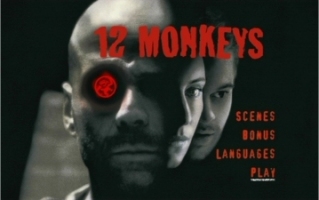 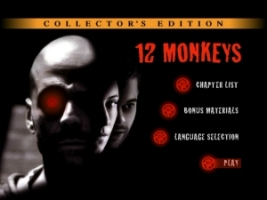 The presentation has improved for this new Special Edition, boasting new anamorphic widescreen menus (above left) that offer a much more appropriate atmosphere than the static menus of the original (above right). The 125-minute film has still been divided into a generous 44 chapters, although no layer change was detected during playback. Bonus features are still presented in non-anamorphic widescreen and fullscreen formats. The packaging situation is hit or miss: although the cover artwork is slightly better designed this time around, Universal has substituted the original's excellent insert booklet for a lousy promotional advertisement sheet. English captions (in the newer Universal style) are provided, as well as Spanish and French subtitles---the latter being a new addition.

Well, there's good news and bad news. The good news: roughly all of the terrific bonus features from the (non-DTS) original release are here. The bad news: there's nothing new...plus the presentation of these features hasn't been improved. Things start of with the classic Audio Commentary with director Terry Gilliam and producer Charles Roven. It would have been nice to hear a new track---perhaps reuniting Gilliam with some of the cast---but this is still one of the best film commentaries you'll ever hear. Gilliam offers plenty of interesting insight in a casual, easy-to-follow manner, and Roven plays off the director quite well despite slipping to the background on occasion. For those keeping score at home, the original release inadvertantly trimmed off a few words by Roven at the end of the commentary. Fortunately, Universal has corrected this problem for the new release. 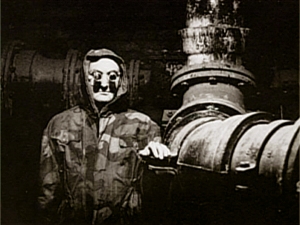 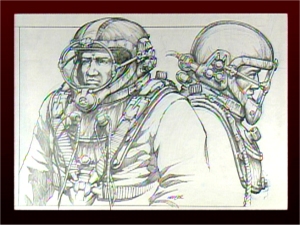 If you think the commentary was good, you'll love the classic feature-length documentary here: The Hamster Factor and Other Tales of 12 Monkeys (90 minutes, above left), directed by Keith Fulton and Louis Pepe. This follows Gilliam and company from the film's inception and production all the way to the mixed public reaction it received. It's literally a film with a film---and along with Lost in La Mancha, proves that the production of a film (failed or otherwise) is often as interesting as the finished product. From start to finish, this 100% fluff-free production is one of the best of its kind. There's only one problem with its presentation on this new DVD, though: Universal has omitted the original 14 chapter stops, so there's no way to jump to different sections. Still present, though---and originally hidden on the chapter selection screen from the first release---is the 12 Monkeys Archives, a hastily-designed slideshow of logos, artwork, and behind-the-scenes photos (above right). There's also some lightly-refined Production Notes and the same non-anamorphic Trailer from the first time around. The only excision from the original release was the Cast and Crew filmography list.

With that said, the organization and presentation of the bonus materials was done in poor fashion. There's well over 3 1/2 hours of material on this one-disc release, including two 5.1 tracks and the commentary. Why not offer the newly-remastered film some breathing room: give the bonus materials their own disc, utilizing the extra space for the original DTS track? This would have only improved the technical presentation, making this version one step closer to a definitive release. $14.95 or not, most fans would have gladly paid a few bucks more for the extra effort.

Another day, another double-dip. Unfortunately, a film that really deserved the extra attention didn't get it---but that certainly doesn't mean 12 Monkeys: Special Edition is a bad disc. The technical presentation is improved over the first releases---at least in the visual department---and all of the same great bonus features are back on board, making this new Special Edition just barely the version to beat on DVD. Although a 2-disc format would have been a much better alternative, it's not often that such a well-rounded release retails for under $15. It may not quite be the definitive version of the film, but it's still a great package at a very reasonable price. Recommended.