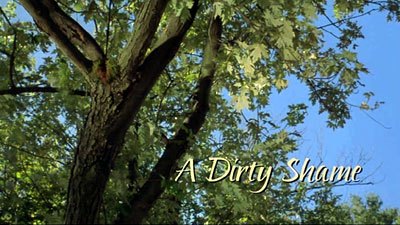 The Movie
John Waters' career divides nicely into "Old Testament" and "New Testament," with the Old represented by community-shockers like Multiple Maniacs and the New taking the form of mainstream-friendly films like Cry-Baby. Using religious terms to describe his career seems only appropriate as his fans' belief in his work almost defines them like followers in a way. It's also appropriate due to the pseudo-Christian undertones in the film.

Tracey Ullman fits right in with Waters' usual suspects as Sylvia Stickles, a "neuter." That label indicates a severely repressed sexuality that mirrors something like 51-percent of the country. Because of her status as a neuter, she denies sex to her husband Vaughn (Chris Issak) and keeps her ginormously-buxom daughter Caprice (Selma Blair) locked in her room. It also means that she gets along great with Big Ethel (Suzanne Shepherd), her overwhelmingly neuter mother, who runs the convenience store Sylvia and Vaughn work in. 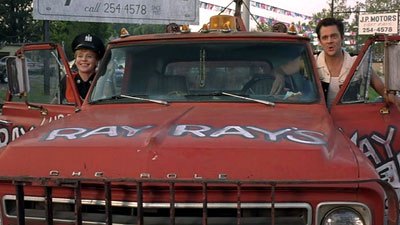 Ullman is excellent as Sylvia, digging into her bag of characters to find just the right choice for a woman unleashed. Though I really don't like her HBO series, I was a big fan of her show on Fox, and would stack this over-the-top performance against anything else she's done comedically. The same goes for Issak's limited role, that of a frustrated man who just wants sex with his wife, which he fills to a T. Of course, few actors can compare to Knoxville's special brand of energy when he's on, and here he's found a tailor-made part. If you can't imagine him as a sexual saint, you aren't trying very hard.

There's a true sense of debt in this film to the trash that has come before, be it the sexplotation genre or the rest of the low-budget world of film. Little touches, like the words that flash over certain scenes, and the variety of background details, like the "Landscape of Lust," give the feel a feel that you just don't get in the majority of films today. And when John Waters has CGI animals in his film, you sit up and take notice.

Waters is back to his pre-Hairspray form with A Dirty Shame, while maintaining the sense of style and production values that mark his studio productions. It's essentially the best of both worlds for fans of the unique filmmaker, as he's filthy and funny. What's interesting is the film's inability to truly shock the way Waters used to. The time may have passed for Waters when it comes to being an outlaw, but trying to stay on the edge of the envelope gets tiring. After a long career like Waters', it's better to be good than just another Farrelly brother. 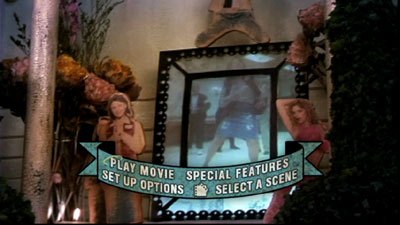 The DVD
A Dirty Shame is being released in two versions on DVD. The original NC-17 version is available, along with a newly edited R-rated cut. For the purposes of this review, only the NC-17 edition was made available.

New Line spread its DVD love all over one disc, which comes dressed to the twos in your stand-issue black keepcase with an insert that lists the chapter stops. The back of the case lists a few extras, but there's more to enjoy than meets the eye (see The Extras.) The disc features well-designed animated, anamorphic widescreen menus, based on the concept of a shrine, with options to watch the film, view special features, select scenes and set up languages. The scene selection menus have animated previews and titles for each scene, while the language options include English Dolby 5.1 and 2.0 soundtracks, English and Spanish subtitles and closed captioning.

The Quality
The anamorphic widescreen video on this DVD looks very nice, as the vivid colors used in this film are reproduced nicely, with bold blues and deep reds. The level of fine detail is quite high, despite the amount of older footage used throughout the film and the frequent night scenes. Blacks are deep and skintones are dead-on. The only issue would be the digital animation that stands-out, as the image is otherwise crisp and error free.

The audio, presented in Dolby 5.1, is very nice as well, with excellent separation among the surround speakers and a strong, well-defined mix for the dialogue. The soundfield is very active as well, with effective panning effects and directionality.

The Extras
Though the packaging makes it seem like the extras are paltry (like they were for the DVD of Waters' previous film), in truth, they are rather extensive...at least more extensive than one might expect for a fringe film like this.

First up is a pair of audio commentaries, not just one as the case says. The first is a screen-specific chat from John Waters. I could listen to him speak forever and if they ever release an audiobook of his book Crackpot, I will be able to retire my iPod, because there's nothing else I'll need to listen to. On this commentary, he provides plenty of info about the production of the film along with lot of humorous observations. Even when he's just entertaining himself by repeating lines from the film, he's still funny. The only think I could have done without was the way he repeated every sexual euphemism, as if they were hidden jokes, but I'll chalk that up to enthusiasm.

The second track isn't even close to screen-specific. In fact, I don't think most of the participants were even watching the film. Instead, a moderator quietly prods Greens Foreman Devra Kitterman, Associate Producer Pat Moran, Production Designer Vincent Peranio, Costume Designer Van Smith and Prop Master Brook Yeaton to chat about what it was like to make the movie and their memories of the production. Moran, a longtime collaborator of Waters', is the most vocal of the group and provides the majority of the comments. Occasionally, the topics discussed match the film, but they don't let that limit their conversation. As the majority of the group has been working together for some time, they get along great and provide a lively and interesting track.

The third, and most impressive extra is "All the Dirt on A Dirty Shame," a feature-length behind-the-scenes piece that covers both Waters' career and the making of this film, from start to MPAA arguments. Some of the information here is also covered in the commentaries, but the presentation is very good, with solid editing, good pacing and Waters' sense of humor. The lengthy featurette can be viewed as one 82-minute chunk or as 16 separate chapters.

A deleted scene is included, but it's also found at the end of the featurette, which is a bit disappointing. The scene is maybe 10 seconds long and not all that amazing. Also included is the theatrical trailer, but it's unfortunately the green-band version, and not the wilder red-band edition. There's several other New Line trailers as well.

Insert this disc into your DVD-ROM drive, and you get the standard New Line InterActual browser, where you can check out a Script-to-Screen player and a nice glossary of all the filthy terms used in the movies. 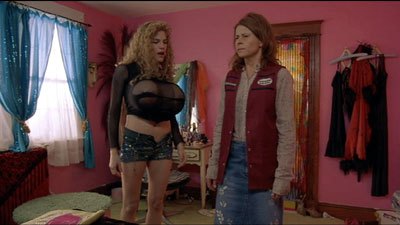 The Bottom Line
Fans of more mainstream films by Waters, like Pecker and Hairspray, might find themselves disappointed by A Dirty Shame, which finds the off-kilter director returning, in at least some small way, to the kinds of films that earned him fame before he was in the multiplexes. Fans of his anarchic spirit will be happy with the renegade way he once again embraces sex as a healthy part of a truly twisted life, a move hinted to in Cecil B. Demented. The DVD package provides a healthy amount of bonus material to support the film, including another entertaining commentary by the movie madman. It's certainly no family film, but it's definitely not Pink Flamingos either. Somewhere in the middle isn't a bad place to be though for an hour and a half.