It may be a tough film to watch, but Mary Harron's American Psycho (2000)---based on Bret Easton Ellis' novel of the same name---is even tougher to write about. Upon my first viewing of the movie a few years back, I wasn't really sure what to make of it. Was it a tightly-wound social commentary about the excess of 1980s culture? Was it a black comedy, a twisted satire, a horror film...or something else entirely?

For obvious reasons, the heated controversy surrounding the original novel's 1991 release almost ensured a film adaptation would never see the light of day. Feminist groups denounced the novel's depiction of violence towards women, leading to an extremely high amount of public backlash and frequent banning of the book (the American Library Association even named American Psycho as #50 in the 'Top 100 most frequently challenged books of the 1990s'). After the dust settled a few years later, the plans for a film adaptation were set in motion. Harron was eventually placed at the helm, with her screenplay (co-written by Guinevere Turner) being chosen over an offering by Ellis himself. It took a few years before the finished product was completed, thanks to a heavily-debated casting process for the leading man (eventually won by Christian Bale of current Batman fame). Like all adaptations, there were trims, additions and alterations to the book; nonetheless, many fans testify that the film does a fine job retaining the heavy tone of Ellis' original vision.

For those new to American Psycho in any form, it follows the exploits of one Patrick Bateman (Bale): young, good-looking and wealthy. The year is 1987; the city, Manhattan; in short, a perfect time and place to be all three. Surrounded by a gaggle of interchangeable yuppies in business suits at Pierce & Pierce, the company Bateman's father practically owns, his life consists of exclusive restaurant reservations, platinum credit cards and the occasional line of cocaine. Other than the drugs and alcohol, Bateman is as body-conscious as they come (a lengthy account of his morning routine early in the film is sufficient enough proof). Still, he's anything but happy with his life.

Below his surface lies a violent and dangerous streak, showing us an elitist who hates his elite surroundings. His compulsive hygiene and cleanliness habits show us a man who scrubs foolishly at permanent stains. His constant stabs at perfection show us that it can never be reached...and probably shouldn't anyway. Hypocritical offhand remarks towards various social groups and races show us a man who can't hide behind his paranoia. We see a killer emerge; a man who keeps duct tape, axes and nail guns tucked away beside coat hangers and bedsheets. He's transformed into a man who murders out of pure contempt for those around him, often making no genuine effort to hide his thoughts and impulses. We're inside his head for the entire film: we hear his first-person narrative, the pop music in his headphones, and---most importantly---everything that everyone else ignores.

We just can't do anything to stop it, and neither can he.

The road to DVD has been a bit confusing for American Psycho. It was first released by Universal in regular and unrated versions; the latter added several cursory shots during the infamous "Sussudio" three-way, though the film's total body count remained the same. Both discs went out of print, so Lions Gate released a third version that only offered the theatrical cut. Now, the same studio has brought forth the awfully-titled Killer Collector's Edition, bringing back the unrated version and causing DVD consumers' wallets and heads to simultaneously explode. None of the previous discs offered much in the way of bonus features, and that's what mostly sets this new version apart from the others.

There's another addition here, though it's much smaller; in fact, it's only four letters long. "Hole". That's it. See, the same infamous three-way contains a bit of naughty dialogue, so the offending four letters that followed "ass" were removed on all previous versions...even though the subtitles said otherwise. On a sidenote, it's great to know that the film's multiple depictions of murder were kept intact, but the word "asshole" was apparently over the line. Other than that minor change, there's a few other technical differences worth mentioning, so below you'll find a series of comparison ratings between the original Universal disc and the new Lions Gate Collector's Edition (just for the record, the original Lions Gate disc was nearly identical, though its few differences to Universal's disc have been mentioned).

NOTE: The packaging for this new release incorrectly states the running time as 122 minutes. This is not true, so no one should buy this new version expecting an even longer film. The film's running time is exactly the same as the orginal unrated release (though it actually appears 25 seconds shorter, this is because the Universal logo has been removed). Whew! OK, I promise we're good to go now.

It's a minor improvement, but an improvement nonetheless. The original Universal DVD featured a pleasing 2.35:1 anamorphic widescreen transfer---and the original Lions Gate release was apparently identical---but this new disc offers a newly-remastered image. Slight improvements in color accuracy and a smoother image were the most notable aspects, but only those with larger setups (and/or progressive scan capability) should notice much of a difference. A handful of very minor problems were still spotted, including some mild dirt and a bit of zebra-striping on the 80s-era window blinds. Nonetheless, American Psycho has never looked better on DVD.

The film's audio presentation sounds slightly tighter around the edges, as the original 5.1 track has been replaced with a new 5.1 Dolby Digital EX mix. It doesn't make a world of difference, but a subtle increase in atmosphere is always a good thing. American Psycho is mostly a dialogue-driven affair, but the film's violent mood swings are rendered nicely, offering strong music cues and several moments of strong ambience. For those without 5.1 setups, a new 2.0 English mix has also been added. The original English captions and French 5.1 track have been dropped from this version, though new English and Spanish subtitles appear in their place (sorry, France). 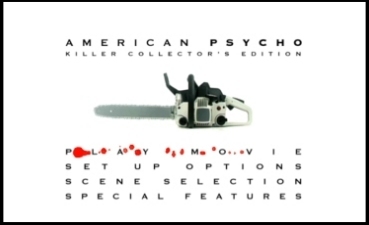 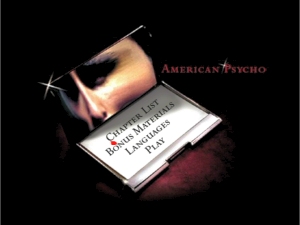 The overall presentation has been given a complete overhaul---it's not an improvement in all categories, but it's a modest step up nonetheless. The new animated menus (above left) are as clean and simple as the previous ones (right), but the new "sterile" look is a touch more fitting. The film has been divided into 24 chapters---as opposed to the original's 18---and no layer change was detected during playback. The cover artwork is hardly as bad as your typical Hollywood "floating head" variety, but I preferred the more ambiguous and graceful original design (seen here). This one-disc release is housed in a standard black keepcase, packaged with a shiny new slipcover and a brief insert booklet. Thankfully, the majority of the new disc's bonus features have been presented in anamorphic widescreen---here's hoping that even more DVDs follow suit.

The bonus material shows a notable improvement here; it's certainly not a perfect set of extras, but it's a much more satisfying effort than the near-barebones first release. Below, you'll find a comparison list of what's new to this release, what's the same, and what's gone (but not forgotten).

What's new?
Two of the most notable new extras are a pair of Audio Commentaries, featuring director/co-writer Mary Harron and actress/co-writer Guinevere Turner. Both ladies shed an interesting assortment of personal anecdotes and other stories; while my hopes were slighted when Harron admitted she hadn't seen the movie in several years, she provided the stronger track of the two. There's a bit of overlap between these tracks and the information found on the remaining new extras, but both are good listens for fans of the film. Still, I was really disappointed that we didn't hear from Christian Bale or Bret Easton Ellis (during any of the new bonus features, in fact); while the former was probably busy on Batman Begins, it would have been great to hear comments from the original author. Also new to this release are a selection of five brief Deleted Scenes, prefaced by interview snippets with the respective "featured character" (12 minutes total, each with optional commentary by Mary Harron). 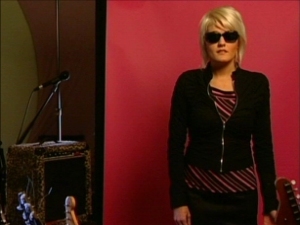 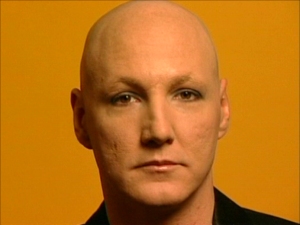 More bonus features arrive with several new Video Essays, with the first three focusing on the book's journey to the big screen (43 minutes total). We hear from director Mary Harron, the film's producers, several film critics and writers (including Amy Taubin of The Village Voice)---but, once again, no Bale or Ellis. It's a nice series of segments with some great stories---including a handful of proposed leading men, one of which actually caused Harron to walk out on the project temporarily----though the overall presentation often resembles a hastily thrown-together MTV special (above left).

Also here is The Pornography of Violence (6 minutes), a piece written by Holly Willis and "performed' by that same chick in the sunglasses (Sarah Ellquist, singer in the band Loma Lynda). Next up is another essay called The 80's Downtown (above right, 32 minutes); this focuses more on the culture that helped to spawn American Psycho, so it's essentially a hazy recollection of stories from the decade of excess. Last but not least, Lions Gate has included a few Teasers and TV Spots that weren't on the original Universal disc, as well as a Trailer Gallery of other releases.

What's still here?
Not much---just the original Red Band Theatrical Trailer (but it's a good one).

Gone, but not forgotten...
Most of the original bonus features from the Universal disc aren't back for round two, but they really weren't anything special to begin with. Just for the record, the recently deceased bonus features include a short & fluffy promotional Featurette (6 minutes), a brief Interview with Christian Bale (6 minutes, though it apparently wasn't on the original Lions Gate release either), Production Notes, Cast and Crew Filmographies and a selection of Other Recommendations. You'll live, trust me.

It may not be a perfect effort---and the lack of participation from Bale and Ellis doesn't help matters any---but this shiny new double-dip (or is it quadruple?) remains a better DVD than all of the originals. There's not enough difference in the "uncut version" to make it the main selling point, but you can bet that Lions Gate will try hard anyway. Those with decent audio/video setups should note a modest improvement in the technical department, while the assortment of new extras should be satisfying enough for new and old fans. Overall, it's a solid re-release that ardent disciples of American Psycho will want to check out---and at less than $20, it's a pretty cheap upgrade. Recommended.