Other // Unrated // March 11, 2005
List Price: $25.00 [Buy now and save at Byebyehavana]
Review by Francis Rizzo III | posted July 3, 2005 | E-mail the Author
In 10 Words or Less
A well-crafted film essay on a country most forget The Movie
I'm not going to pretend that I know much about Cuba beyond the country's leader, its cigars and its ability to produce baseball players. I simply haven't kept up my Social Studies the way I should have. But despite that, I have a pretty good feeling that it's not the Happiest Place on Earth, considering the way people ride makeshifts rafts to America to get away. "Bye Bye Havana" may not provide a complete picture of Cuba, but I'm willing to bet that the sad scenes in this film give a good idea of what's happening under Fidel Castro's rule.

Utilizing fantastically enjoyable Afro-Caribbean music, old footage from cartoons and propaganda films and animation, director J. Michael Seyfert doesn't really tell a story or try to deliver a point of view, but instead allows his camera to serve as the audience's eyes in Cuba. Various people and places find their way in front of the camera (often with a request for payment) and with just a few words they take the viewer into their world. Whether its a prostitute offering her body in an effort to escape her life, or a man with a massive stone chained to his leg, there's not much time spent, but it's all effective in illustrating this strange world.

Cuba, as one of the last few Communist strongholds and a land people are willing to die to leave, inspires strong emotions and feelings, and plenty of political arguments, especially regarding the U.S. government's policies on the matter. Seyfert views this subject without much in terms of bias, though in giving money to his subjects, he certainly shows sympathy and perhaps something of an ethics problem. 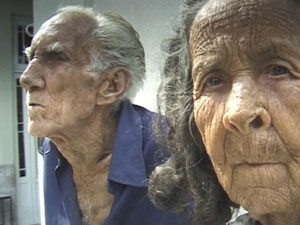 A bit of the filmmaker's opinion shows through again in the form of a pop-up military officer who appears whenever government policy is discussed. But truthfully, this is not a slam job of Cuba, but instead a poignant look at the people suffering there. In fact, other countries get a rough time of it, especially the Cold War U.S. policies and the tourists from countries that allow it. That is, if that's how you take it. Unlike Fox News, Seyfert really does report so you can decide.

Though the subject matter is wholly depressing, the presentation is actually quite entertaining. Seyfert shows a sense of humor in how he edits the film, and the people he shines a spotlight on. It's no laugh riot, but it's one of the better produced and enjoyable documentaries about a serious subject that's been made lately.

The DVD
The disc comes packaged in a cardboard digipak, with a plastic tray, and is marked as a limited edition DVD. The disc features an animated full-frame main menu with choices to play the film, with or without English subtitles, visit a weblink and view a special feature. There are no chapter selections, audio options or closed captioning. 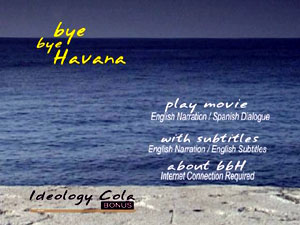 The Quality
The full-frame video is clean and colorful, looking as good as natural video can look. Blue skies are crisp and details on the crumbling buildings are highly visible. The only problems seen are the blurring that's seen often on video during action. The animation can get a bit pixilated in spots, but it's nothing horrible. Even the old filmstrip footage used is in good shape, with just a mild, and perhaps intentional bit of glowing.

Aurally, this is one of the most aggressive Dolby Digital 2.0 mixes I've heard. The excellent music mix pounds out from the speakers with deep bass and nice clean sound. The only trouble as far as sound goes is narrator Roger Bunn. His dialogue is rather slurred and mumbled, which is annoying when he's explaining what's going on on-screen.

The Extras
There's just two extras on this disc with only one available on your DVD player. That's "Ideology Cola," a different four-minute cut of the dance sequence from the film. The music is certainly good, but the video is a bit odd, as the dancers perform in a run-down building. I've not exactly figured out the meaning of the segment, either on its own or in the context of the film, but it's memorable either way.

The other extra is web link to the very informative "Bye Bye Havana" web site, which provides updates on conditions in Cuba and background info as well. 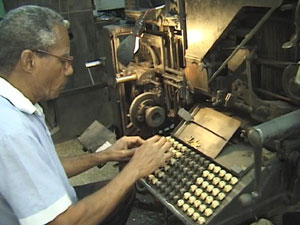 The Bottom Line
For all the problems this country has, if you watch this DVD and don't consider yourself lucky (or perhaps a bit guilty) about not living in Havana, then you probably didn't pay enough attention. Instead of relying on the old standards of documentary filmmaking, Seyfert let images talk for themselves, unless he could make them speak louder through interesting editing, animation and a wonderful soundtrack. Incredibly, despite the utterly damning footage, the film never comes out with a defined stance on Cuba, instead serving as a crystal-clear window into a crumbling world. The DVD delivers the film with a solid presentation but in a nearly bare-bones package. Feel good, this is not, but for anyone intrigued with foreign cultures or the power and possibilities of the moving image, this is worth checking out.