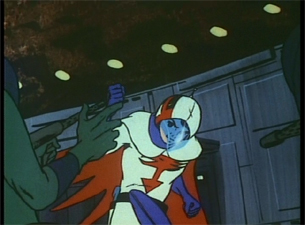 Back in 1972 the original Gatchaman series aired in Japan and the show ran for 105 episodes. It wasn't until 1978 that the show came across the seas to America in the form of Battle of the Planets, but it did so at a cost and was severely edited and cut down to 85 episodes. Gatchaman had another crack at the American audience in 1986 with the title G-Force, but was harshly translated and left much to be desired.

Needless to say, until this point there hasn't been a faithful representation of the golden oldie show, but thanks to A.D.V. the adventures of Ken Washio and the Scientific Ninja Team get the treatment they deserve. Not only is it the first time Gatchaman has been heard in its original Japanese here in the U.S. but a new English track has also been added. If you were a fan of the show you will enjoy the trip down memory lane with these releases, but if you have never heard of it until this point it's interesting to take a look at a show that inspired a lot of today's anime.

To some anime fans, the show may be a little too old style with some low quality animation, tacky dialogue and every character running around in bell bottoms (this was the 70's after all). I say that's just part of the charm though and while some points are extremely cheesy the show is upbeat, fun and creative. I mean when your main characters run around dressed up as birds fighting an evil corporation called Galactor, you have to take things with a grain of salt.

The whole premise behind Gatchaman is that in the future the sinister group Galactor rises up to try and take over the world. It's up to Dr. Nambu and his team of five Science Ninjas to stop their diabolical scheme by whatever means necessary. The team consists of Ken the Eagle, Joe the Condor, Jun the Swan, Ryu the Owl and Jinpei the Swallow. In this first volume we meet the crew and join them on their beginning adventures. The pacing is very fast and they get right to the story in every episode so there's no beating around the bush. There is also a bit of continuity, but there are also some one-shot installments that stand alone.

The episodes included on the first volume are: Gatchaman Versus Turtle King, The Evil Ghostly Aircraft Carrier Appears, The Giant Mummy That Summons Storms, Return of the Iron Beast Mecchadegon, Ghost Fleet From Hell and The Grand Mini-Robot Operation.

A lot of these enemies and plots will make you cringe and laugh. Why would Galactor need to create a giant flying mummy that creates rain storms? What's the point of explaining "powerful man-killing lasers"? Does Galactor make mini robots with puppy killing lasers? Yes, it's all laughable to watch, but honestly it's a nostalgic kind of funny.

Considering the sheer amount of episodes that are going to be released through A.D.V. it's great to see volumes containing a substantial amount of the series. With six episodes on the disc running at 25 minutes each, the low price of admission buys you a lot of show for your buck. I recommend the show for any anime fan and despite the fact that the series is over thirty years old, it feels familiar thanks to the ideas that it pioneered.

Quite honestly, this is about as good as Gatchaman has ever looked considering the age of the show and quality of animations for the time period. It is presented with its original 1.33:1 full frame aspect ratio and any faults in image quality are attributed to the source material. Seeing as the show was produced in 1972 you can expect to see a lot of grain, choppy animations, lighting issues and occasional shaky image. But I suppose one could argue that just adds to the classic air around the show. Who knows how this series was stored, but given the fact that it is older than I am I have to say that I'm really impressed with the transfer. Many of the colors are solid throughout, though there are a few moments where the quality drops off significantly and becomes muddy. In the end I have to give a pat on the back to A.D.V. for restoring this classic and doing such a wonderful job of it.

Gatchaman Volume 1 includes a new English dubbing and the original Japanese audio tracks. These are presented with a 2.0 mix and depending what you are looking for they each provide different quality. The English features louder and cleaner sound but also some extremely horrible voice acting at times. It's competent enough to watch, but makes for a more laughable experience.

The original Japanese features a softer sound transfer but is the most faithful to the material. I found myself enjoying the Japanese mix more, though sometimes I bounced back and forth to see what some of the differences were. Again, the overall quality for the original is decent considering the fact that it's over thirty years old.

Aside from some A.D.V. previews, the first volume of Gatchaman also features some extras worth mentioning. A creative addition that I haven't seen before is called Gatchaman Karaoke which plays the first episode with music and sound effects, but no voiceovers. Instead subtitles appear on the bottom so you and a group of friends can be the voice actors. Sure it's pointless, but it's kind of funny and a unique inclusion that I rather enjoyed.

The industry standard clean close animation is included as well as a couple of commentaries for episodes five and six. In the episode five commentary it showcases director Charles Campbell and the English voice actor for Ken, Leraldo Anzaldua while the one for episode six has Campbell and voice actor for Joe, Brian Jepson. As far as commentaries go these are pretty good with a few laughs tossed in but sometimes they can drag on with awkward silences. 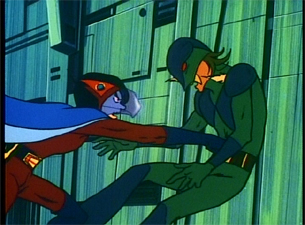 By today's anime standards, Gatchaman is a dinosaur but for it's time it was very advanced. Much of what you see in shows today found their inspiration in series like this and despite the fact that it seems cheesy when you go back to watch it, the nostalgic value is extremely high. If you enjoyed Battle of the Planets or G-Force when they came out in the States, you owe it to yourself to see the uncut version of the show.

Many of the fight scenes that were considered too violent and controversial for the time period have been added back in, not to mention we're going to see all 105 episodes. The original Japanese is a treat and the English track is competent enough, although it can be very corny at times. Sure it may not be for everyone, but older anime fans will definitely dig it. Recommended