Muppet Show - Season One, The 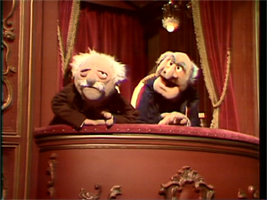 Waldorf: "That was a funny show."
Statler: "Yes it was, I wonder if they meant it that way."
The Show:

I know it may sound like I'm being biased, but I have to say Jim Henson was a genius. 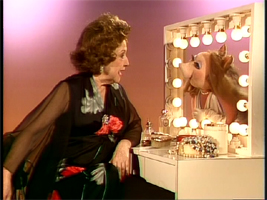 Ever since I was a kid I have absolutely adored the Muppets. Where else can you find a pig that speaks faux French, a dog that plays the piano, or a bear that tells jokes (badly)? The imagination shown here is something modern day writers and producers can only dream of. The problem was that for the longest time the only way we were able to watch these episodes were on cruddy old VHS tapes with poor tracking and commercials for products that don't exist anymore. Sure back in 2002 we saw a "best of" series of releases, but those were only 15 discs and 45 episodes (out of 120) so it was far from complete. Thankfully, the long wait is over and the first season box set has arrived.

Long time fans will notice some changes afoot. There are some skits and songs that have been cut for whatever reason from this edition. Jim Nabors "Gone with the Wind", Vincent Price "You've Got a Friend" and Paul Williams "All of Me" are a few of the losses, but all isn't so bleak on the Muppet stage. Every episode in the set features a special UK skit that has never been released in the US before so while we are missing some stuff, we gain a lot more.

Compared to the seasons that follow, the first is arguably the lowest quality. It was never known how successful the show was going to be so it was difficult to sign really big name guests (unlike the later seasons). Not only that, but Henson and company were still discovering what worked and what didn't, so there are several changes to the show and characters over the course of this season.

You can see the progression of puppet quality easily from the earlier taped episodes to the later ones and even hear the difference in their voices. Different vocals were tried for several characters so it's not rare to hear two different voices for Miss Piggy or Fozzie in the same episode. Obviously they eventually get these bits ironed out but it's interesting to see how they got to the point they were at in their prime. But beyond all the mayhem and entertainment, season one is great look at the evolution of many standard characters that we know and love today. 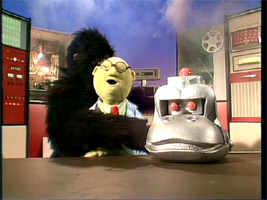 The first season has several classic moments that many of you may know and love. Some of the more unforgettable ones are "Good Grief, the Comedians a Bear", "the Koozebanian Mating Ritual", Gonzo growing a tomato plant to the 1812 overture and my personal favorite Dr. Honeydew's "Gorilla Detector". Episodes that have a continuing theme that run through the whole show are also unforgettable. In season one we see Gonzo going after Miss Piggy, The Phantom of the Muppet Show and Crazy Harry blowing everything up.

And, let us not forget the music! Season one has some great numbers such as "Simon Smith and His Amazing Dancing Bear", "Mahna Mahna", "Mr. Bassman" and even "Lady of Spain" played by The Amazing Marvin Suggs and his Muppaphone. Some of my favorite musical numbers from this season are Ethel Merman's "There's no Business Like Show Business", Ben Vereen's "Pure Imagination" and Kermit's classic "Bein' Green". 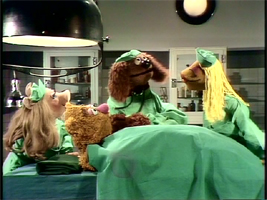 Something I found interesting in the first season was how the guest stars are worked into the show, or rather not worked in. Celebrities made a few minor appearances during the course of the show and often performed a song by themselves. At a few points this season we see a more personal approach taken with some episodes, but not all. I always enjoyed the guest room talks more than the discussion panel and we see a little bit of that in the first season.

For the most part these episodes are in order of their production dates (not air dates) although there are some that are out of sequence. This means if you start watching from the beginning of disc one you will notice introductions of some characters (Scooter for instance) that were already in earlier episodes. They were broadcast out of order because it was never really known if the show was going to make it so they wanted to start the season out with some strong episodes.

Despite all the growing pains the show went though in its first season it was still nominated for an Emmy for Outstanding Comedy-Variety or Music Series in 1977. Even thought they didn't win, it was a foreshadowing of good things to come. With a solid format for the show, a growing group of fun new characters, and a bigger list of celebrities wanting to participate, there is not where to go but up. As the show got better, so did the guests and it's extremely interesting to see the progression of the Muppets from the first produced episode to the last. This season may be the weakest of the Muppet's run, but there are still plenty of classic episodes here to keep you entertained.

The 24 episodes in order that they appear on discs: 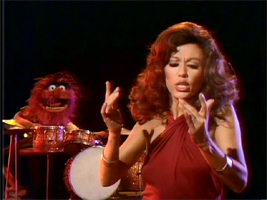 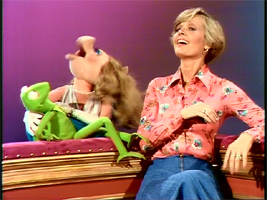 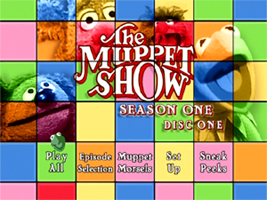 The packaging for The Muppet Show Season One is particularly colorful with a fuzzy Kermit green cover. The set is small in size thanks to my least favorite of box set layouts; the overlapping disc. Another point that is worth mention is that there are no scene selections or skips. So once you start watching an episode you have to fast forward your way through if you want to see a particular sketch. Considering the fact that it's a variety show (and the "best of" discs had it) some scene selection ability would have gone a long way to being more user-friendly.
Video:

The Muppet Show Season One is presented in its original 1.33:1 full frame aspect ratio and has a remarkable transfer. Considering the fact that the material is nearly 30 years old it's amazing the job that was done to clean things up. It's not a crystal clear image though and it's easy to spot some edge enhancement, grain, fading colors and some varying lighting. Most of that probably has to do with the source though and isn't really the DVDs fault though darker areas show some compression artifacts.

Compared to the "best of" releases that came out a few years ago the video quality is noticeably better here. In the season one set the colors are more defined and the image is significantly sharper.

The audio has been remastered into Dolby Digital 2.0 stereo (with optional subtitles) and is mostly all front channel material. Just like the image quality, the sound is very good considering the age of the show. There are a couple of skits and songs that are louder than the others but for the most part everything follows the same clear quality. I found myself turning up the volume on some numbers simply because I haven't heard them in years and they were old favorites.

Naturally this box set features a decent selection of extras (aside from some previews) although I was hoping for more. Then again there are four more sets to be released so you can't expect everything all at once.

One of the more interesting extras is called Muppet Morsels and is basically a pop-up trivia feature that activates while you are watching the show. Each episode is loaded with information regarding the production, characters, guests or particular skits. Many times features like this are dry and not worth using, but I found it worthwhile to watch each episode a second time just for the information. There are a couple of typos that pop up while this feature is running, but it only happens a couple of times and isn't anything too bad.

A Promo Gag Reel is also included which features some borderline outtake moments where a couple characters talk about the next episode. Some of these were pretty funny and make the feature worth checking out.

The original pilot episode "Sex and Violence" is included on the set and it's interesting to see the different take on the Muppet Show. This version features Nigel and Sam in an office-like back stage instead of Kermit in the Muppet Theater that we know. There are a few random skits like the Swedish Chef making a sandwich, a pair of wrestlers going at it, Statler and Waldorf acting old in a den, and a Muppet version of Mt. Washington that tells lame jokes. It's interesting in an "alternate universe" sort of way.

Probably my favorite extra (or at least the one that got the most laughs out of me) is the Original Pitch Reel that was used to try to sell The Muppet Show to TV stations. It starts out with a Muppet newscaster talking about the show and then that Henson insanity creeps in. The tie loosens and the reel degenerates into maniacal genius rather quickly. 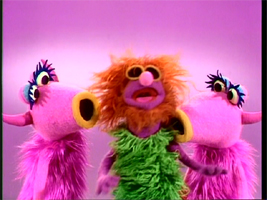 Whether you're a kid, an adult or somewhere in between, The Muppet Show will grab you and make you smile. The first may be a little rocky compared to future seasons, but there are so many classic moments in this set that it will entertain anyone that has a place in their heart for Kermit and the gang. Considering the age of the material in question the audio and video quality are phenomenal, even compared to the "best of" releases from 2002.

Is it worth double dipping if you already have the "best of" series? Well, both have the UK skits and there are no overlapping special features. The quality is better with the season one release and the simple fact that every episode is here speaks for itself. Highly Recommended