Columbia/Tri-Star // R // August 2, 2005
List Price: $29.95 [Buy now and save at Amazon]
Review by Svet Atanasov | posted August 8, 2005 | E-mail the Author
The Film:
April 1945, the last days of Hitler. Berlin is on the verge of being destroyed by the Red Army. Hitler and the entire political and military leadership of the National Socialist Party are slowly realizing that the end is near. The remaining parts of the once almighty German army are unable to push back the Russians, both the Eastern and Western fronts are now doomed. Yet, Hitler still wants to believe that his military leadership will outmaneuver the Red Army and prevent it from entering Berlin. Sheltered in a bunker nearby the once glorious Reichstag he often bursts in rage only so he could minutes later disappear in his office contemplating what Germany could have been.

On an extraordinary large Victorian table a miniature model of Berlin has captured Hitler's attention. Massive white architectural prototypes of buildings that would have epitomized the power of the Nazi regime are now just a pile of useless paper. Berlin, as Hitler envisioned it, is never going to be built. His plans to redraw the map of Europe now seem like a memory that even the most zealous of his followers will have to admit was a failure. 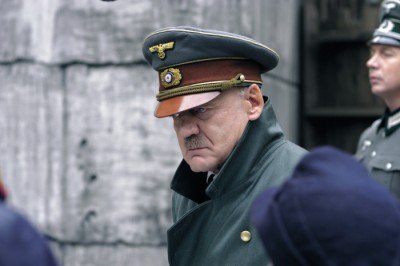 Under the thunderous skies of Berlin, however, soldiers are still fighting. Every street, every home, every sidewalk is a battlefield. Even little children wearing intimidating uniforms are being called upon to defend the city. Those who refuse to join the resistance are swiftly being dealt with, ordinary looking men are hanging from street poles and bodies are lying around often decorated with brash signs denouncing the "traitors". A state of human pandemonium has engulfed the city of Berlin. 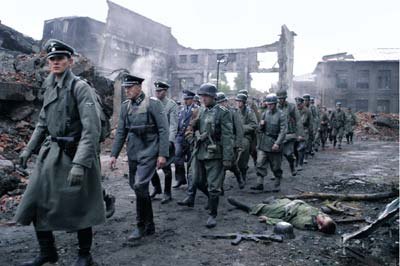 Based on the books "Until the Final Hour" by Hitler's secretary Traudl Junge and "Inside Hitler's Bunker" by Joachim Fest Der Untergang a. k. a Downfall is a film that examines the last days of Hitler before his infamous suicide. Directed by Oliver Hirschbiegel, well known for his 2001 project Das Experiment, this is a film that shakes the very core of the image Hitler has been associated with during the years. An extremely mature and well-balanced look at the final hours of Nazi Germany Der Untergang is more of a character study than a typical period film.

The level of realism that Oliver Hirschbiegel delivers is not only unprecedented it is quite frankly intimidating. I can hardly recall another actor in recent history recreating a historic figure of Hitler's magnitude as uncompromisingly perfect as Swiss-born Bruno Ganz conveys. The inhumanly vile outbursts, the powerful gestures numbing everyone surrounding Hitler, the look of a madman well-aware of his mission, are not the acting of a man attempting to reconstruct a controversial political figure. What we see in Der Untergang is Hitler, awaiting his fate and contemplating the inevitable. 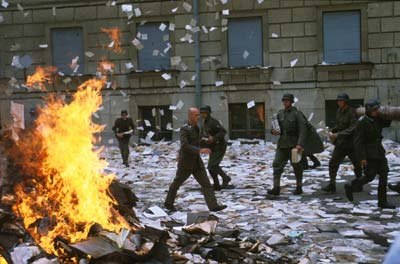 There is much in Der Untergang that is rather suggestive than outright revealing. Shot almost entirely within the confines of Hitler's bunker the film never really attempts to recapture the massive onslaught Berlin was exposed to. On the contrary it reveals a rather intimate look at a man that is as abusive with his generals as he is affectionate with his secretary Frau Junge. In fact, much of the narrative is indeed structured around Hitler's emotional struggle to surmount the fact that his vision of a Greater Germania is slowly fading away. Yet, together with the impeccable recreation of Hitler Der Untergang reveals the city of Berlin in a manner one could only imagine seeing in Dante's Inferno. The few shots of kids dragging bazookas, the Nazis frantically throwing books and documents through the windows of half-crumbled buildings, "civil" groups dealing with the "Bolsheviks" on the streets of Berlin, and amateur doctors cutting torn-apart human legs give Der Untergang a level of authenticity that even Roman Polanski's The Pianist could not achieve. 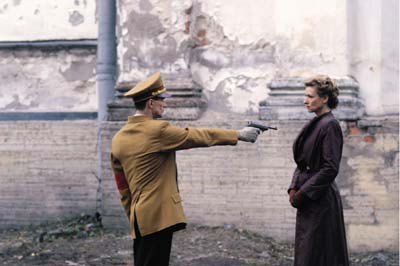 There are scenes in Der Untergang that my writing I am afraid will fail to describe adequately. Near the end when all seems lost many of the bunker's inhabitants begin final preparations. Some submerge into a grotesque orgy of alcohol and uncontrolled dancing other retreat in the darker corners of the underground shelter preparing to commit suicide. No one shares the illusion that the course of history can be reversed. Hitler also stages a final diner after his relationship with Eva Brown has been made official. A group of children is singing German songs while a few of Hitler's generals are quietly smoking in a state of total disbelief. These are scenes so overwhelming that the intensity they are filled with is simply unbearable. 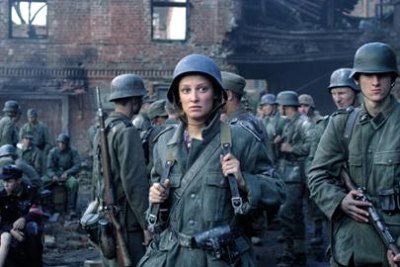 Much has been written about the manner in which Hitler is portrayed in Der Untergang. Some have claimed that Oliver Hirschbiegel has been too generous "humanizing" the dictator. I could not agree more…and yet disagree with such claims. The emotional struggles which Hitler undergoes on the screen are so well performed by Bruno Ganz that the evil which he exemplified is revealed with a force that I have seen in only a few films during my lifetime. This is indeed filmmaking by a mature director that has captured the very essence of a man consumed by madness. In fact, I can attest that Hirschbiegel's approach is precisely why the film worked for me. Der Untergang defies quite well every major cliché that film directors end up following when exploring Hitler's persona by placing morality well before authenticity.

Half a century after his death Hitler is still a man that fascinates historians. His impact as a politician, demagogue, and a leader, strongly resonates with the international community. The faith and hatred he planted in the hearts of his followers created tragedies that history will remember forever. The burden of his deeds is so overwhelming that anyone that touches it turns victim of conventional stereotypes, including film directors that aspire to retell his story. Oliver Hirschbiegel and his latest film Der Untergang are a rare exception. Crafted with an enormous amount of detail this is a film that delivers an Oscar-caliber performance by Bruno Ganz. More importantly, however, it reconstructs the final hours of Hitler in a manner only a few films have successfully managed. There is no "romanticizing" or "glorifying" of Hitler and his closest accomplices in Der Untergang. For anyone claiming that the director does so I recommend that you view the extensive interview with Olivier Hirschbiegel and then see Der Untergang again. If anything, Olivier Hirschbiegel has clearly come to terms with the fact that history can not be reversed though certainly it can be learned from. At least by those mature enough to grasp its significance. 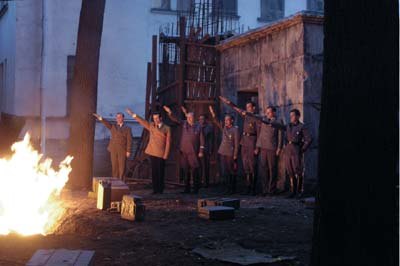 How Does The DVD Sound?
I assume that just as it was the case with the video presentation many will be curious to learn how the two existing versions compare in terms of audio quality. Well, this time around I can clearly indicate that the German Premium edition is without a doubt the better option. While the Region 1 release boasts only a German 5.1 Dolby Digital track the German R2 disc offers a thunderous DTS track that simply is beyond any direct comparison. I suppose that the easiest way to determine the differences between the two versions would be to view the air raid that Berlin gets exposed to towards the middle of Der Untergang. The sound aggression you would hear from your DTS infused speakers is almost intimidating and places you in the middle of the action much more convincingly than the 5.1 track.
With this said, the Region 1 release has nothing to shy away from (aside only from the fact that the English subs appear burnt-in and are NOT optional). For those that are not hardcore audiophiles the 5.1 track will without a doubt meet the expectations. It is indeed a well-mastered mix that separates action from dialog perfectly and compliments the film rather well. If you, however, are looking for the complete package of Der Untergang the audio presentation clearly places the Premium Edition as your undisputed winner between the two English friendly versions.