New Yorker Video // Unrated // August 23, 2005
List Price: $29.95 [Buy now and save at Amazon]
Review by John Sinnott | posted August 30, 2005 | E-mail the Author
In a nutshell:  An important and ground breaking film in which a couple take a weekend trip into the country and get much more than they bargained for.

Jean-Luc Godard was one of the French New Wave directors, a group who attempted to create an alternative to the Hollywood movie in the late 50's and early 60's.  Along with François Truffaut, Claude Chabrol, and Eric Rohmer, Godard made films that challenged people's perception about how a story should be told on film.  Many of the films that came out of this movement are considered classics today including Truffaut's Les Quatre Cent Coups (The 400 Blows), and Godard's A Bout de Souffle (Breathless), but none of them are as audacious and dazzling as Godard's Week End. 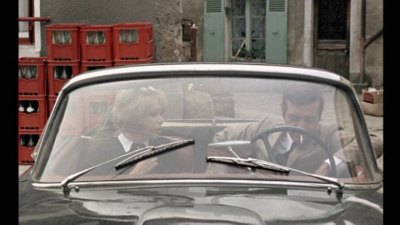 This film is the story of a thoroughly unlikable husband and wife.   Corrine (Mireille Darc) is an adulterous woman who is waiting for her father to die (and hopefully her mother too) so that she can inherit his great wealth.  She self-centered and pitiless, stealing designer clothes off of dead bodies and sleeping with her husband while she plots to kill him.  Her husband is no better.  Roland (Jean Yanne) is a disagreeable lout who sets people on fire who annoy him and sits by passively while his wife is being rapped.  As soon as Corrine's father dies, each one plans to kill the other so they can have the money all to themselves.

This premise sounds like the beginning of a good Hitchcock film.  But in the hands of Jean-Luc Godard, it turns into something totally unexpected.

Setting off by car one week-end for Corrine's parents estate so that they can claim their inheritance when her father dies, things go badly for the couple.  They encounter horrible traffic, bad weather, they get lost, get kidnapped, and finally lose their car altogether.  As the couple travels from their urban home into the rural countryside the world becomes more chaotic, and the film itself becomes just as anarchic as the world it depicts.

This is an amazing film in many ways.  It is filled with symbolism and meaning, it challenges the rules of editing and story construction, and plays with music and sound.  It is surreal and dream-like in parts, and all too real in others.

One of the strongest aspects of this film is that each scene is like a mini-movie within the larger film.  With each new scene, you don't know what you'll get.  Around any corner could be a gun-totting deity, Emily Bronte, or philosophizing garbage men.  The film continually changes focus.  Week End starts off as a film noir thriller, with the main characters planning on killing each other as soon as they have their inheritance.  As soon as they set off on their trip though, the murders are forgotten, as is the dying father.  It turns into a road trip film, then into something like Alice in Wonderland, then into a survival film. 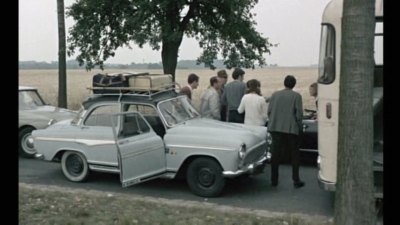 There are several great scenes in this film, but one stands out above the rest: a ten minute tracking shot of a traffic jam.  The cars are almost still on the road as children play ball and adults sit and wait.  At first you're wondering what the hold up is, then you start to wonder how long this scene is going to last.  Eventually you start to wonder about the people sitting by the side of the road for the traffic to clear.  How long have they been there?  How long will they be stuck? By the time the cause of the mess is shown, your slight ennui turns to shock.  The scene works amazingly well.

I could go on about the film's indictment of capitalist values, the way Godard has sounds and images play off of each other, his editing technique that always reminds you that your watching a film, and the black humor that is used to great effect in the film.  But that's not the purpose of this review.  Suffice to say this is a wonderful film that every cinemaphile should view. 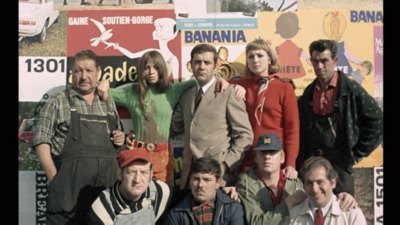 This film is presented with a two channel mono soundtrack which sounds a little less than average.  Made in 1967, you can't expect a large and dynamic sound, but I was hoping for a bit more than this.  There isn't much bass in the soundtrack at all, and at times the music sounds tinny and weak.  There are several instances of distortion too, the most prominent being a huge crack 32 minutes into the film.  I thought there was something wrong with my speakers at first, but it turned out to be the film.  Luckily this only happens once.  There is also some background noise present throughout the film, but it is at a low level. 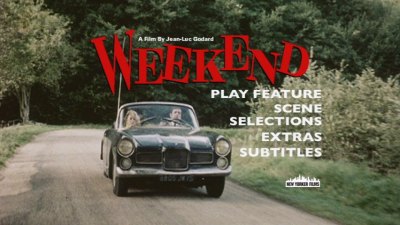 The anamorphic widescreen image is presented in the film's OAR of 1.66:1.  The picture is about average overall.  The colors are a bit muted, but only very slightly.  Blacks and dark areas have a lack of detail, but this is probably because of the high speed film they used (cinematographer Raoul Coutard mentions this in the interview included on this disc.)  The image is also rather soft.  Besides this the detail was good and the image is very clear.  There was only a very few print defects, and these were minor.  Happily there wasn't any edge enhancement.

One problem with this DVD though is that the publishers apparently used a PAL print of the film to make this DVD which causes a 4% speedup in the film.  (The film runs 1:39 minutes as opposed to the original running time of 1:45.)  Aside from having everyone speak in a slightly higher register (something you won't notice unless you are very familiar with the actor's voices) there is also some slight ghosting in a couple of fast moving scenes.

There are a good number of extras included on this disc.  First off is an 18-minute interview with cinematographer Raoul Coutard.  He discusses what Godard was thinking during the filming, and relates how the director didn't get along with the producer and how the lead actress was forced on Godard.  An interesting talk.

Director Mike Figgis also has a 23-minute monolog giving his thoughts on the film.  This was a little dry and analytical, but Figgis did bring up some interesting points about the film.

There is also a commentary with film critic David Sterritt.  I found this to be an entertaining and illuminating track.  Sterritt comments on Goddard's style, the metaphors, the vast number of symbols and themes in the film.  Well worth listening to.

This is a great film, and one that every fan of the medium should see.  Bold and audacious at times, Godard tries many experiments through the course of the film.  Not all of them work, but the final product certainly does.  A simply dazzling film, I only wish that the audio and video presentation had been a tad better.  Even with these flaws, the movie is Highly Recommended.