The Story So Far...
The popular Web flash cartoon made its debut on DVD in November of 2004, with the release of 100 episodes in a three-disc set.

The Show
Being an Internet geek, any Web trend seems like it's covered the world, but when I speak to one of my non-'Net-focused pals and mention something like "All Your Base..." or Google Talk, they tilt their head like a dog watching you lip synch to a Beegees song. They just don't understand what's coming out of your mouth. So trying to explain Homestar Runner is simply a lost cause. And that's a dang shame, because due to its good-natured...nature...it should appeal to anyone and everyone.

The site centers around the mildly retarded hero Homestar, but it's hard to say that he's the most popular character the site's creators, the Brothers Chapman, have given Flash-based life to. Rather, Strong Bad, an egomaniacal little man with massive boxing-glove hands and a Mexican wrestling-mask head, is the big man on digital campus. In his regular feature, he answers real e-mails sent to him by readers. Naturally, the answers aren't exactly straightforward, matching the questions in oddness. With a big attitude he makes fun of those who write to him before answering their question, though he may end up on an odd tangent. 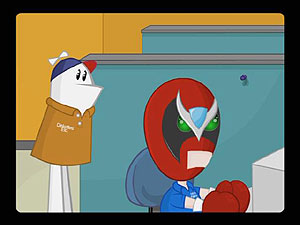 Though Strong Bad is, at heart, a bad person who enjoys making fun of others, much of the humor is derived from pure silliness. There's a large amount of internet/computer geek references as well as '80s pop culture fun, but many of the bits work simply because they are fun. There's previous few series that can entertain across a spectrum the way this one does, and that's because it speaks to the child in everyone.

The majority of the cast is represented in these episodes, though Senor Cardgage, a creepy older Strong Bad doppelganger, makes just one appearance. Fortunately, there's plenty of marble-mouthed Coach Z to go around, some fun appearances by Strong Bad's depressed brother Strong Sad (check out "Radio" for a Strong Sad classic), and a bunch of great scenes with Strong Bad's other, monosyllabic brother Strong Mad. Be warned: there are plenty of in-jokes from the first 100 episodes that are referenced here. Catch up by checking out the episodes on the homestarrunner.com Web site.

Watching these episodes, they just don't seem to have the same energy or humor the first 100 episodes had, but then an episode like "Virus" will pop up. Breaking all the "rules" for the series and trying something very new, this e-mail put the series back on course and delivered some big laughs. That episode is followed by the great "Animal" which introduces Strong Bad's new computer, and "Radio" which pokes fun at radio stupidity. This trifecta came at just the right time for Strong Bad and his e-mails, though even less-than perfect Strong Bad is still better than 90% of what passes for comedy. 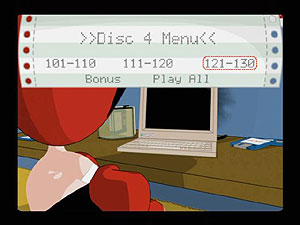 The DVD
The DVD, the fourth in a series, is packaged the same way as the previous three, in a ThinPak, with a big-headed Dangeresque cover. The disc opens with a sweet 3D version of the introduction of the Lappy 486, which leads into static menus hosted by everyone's favorite green-and-white paper. The main menu allows you to choose one of three groups of e-mails, view them all or select the bonus menu. Leave the paper sitting too long, and you'll get to see a fun easter egg. The episode selection menus are broken down into groups of 10, which can be viewed one at a time, or in 10-packs. There are no language options, subtitles or closed captioning.

The Quality
One thing this DVD does extremely well is show how good the animation on this series. Blown up to full-frame for TV, the episodes look crisp and smooth, with nice color and perfect detail. The only negative comes with one of the disc's best episodes, "Virus." Because this one doesn't have the same shape as the rest, it has been shrunk down to fit. Unless you watch it on a massive screen, it will be hard to read many of the jokes. But other than this misstep, the e-mails look fantastic on DVD.

As far as the sound goes, one wouldn't expect a flash series from the 'Net to blow you away aurally, and this certainly doesn't. But, it really didn't need to in order to deliver the show properly. Nice clean dialogue and music that sounds just the way it did online make for an enjoyable DVD experience.

The Extras
The extras don't seem too great when you flip to the bonus menu, which features a nice 3D scene with Strong Mad and The Cheat, but that's because the majority of the extras are hidden bonuses. We'll get into that later though. First up is a never-before-seen e-mail, "Family Resemblance." It's not up to the Chapman's usual work, but its not awful either.

"Sample of Style Too" looks at how the Chapmans' create the shows, but as anyone would guess it's not exactly a serious look. Ping-pong balls have rarely been funnier. From there though, it's a it of a downhill slide, with a pair of music videos, one done with puppets, the other in the style of The Cheat, and a pair of karaoke videos, including a dreadful Limozeen song.

But (thankfully) that's not all.

Though there's no mention of them on the menus, 32 audio commentary tracks are included for the 30 episodes, featuring a mix of characters and creators, including both Chapmans, collaborators Jonathan Howe and Ryan Sterrit, and Homestar, Marzipan, Strong Bad, Strong Sad, Bubs and Coach Z. The commentaries, like the episodes, are quick and funny, with small bits of information throughout. If you enjoy the show, you'll enjoy these tracks.

Alternate angles are included for most episodes as well, to recreate the easter eggs traditionally found throughout Strong Bad's e-mails. Instead of clicking on them, they appear where they would normally be hidden. Then, at the end of each episode, any easter eggs originally found are again hidden as invisible icons. Fans tend to enjoy the easter eggs as much as anything in the regular show, so including these was a good idea.

Finally, four featurettes are hidden on the bonus menu. These include outtakes of puppet performances with the Little Girl (always cute and funny), outtakes of the Sample of Style featurette with the Chapmans, a featurette with clips of the puppets on location, and an e-mail show done with puppets instead of animation. That's probably the best of the four, but all of them have some reason why you should watch. 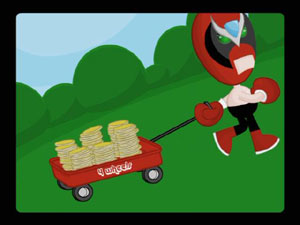 The Bottom Line
The Homestar Runner Web site delivers some of the most consistently funny comedy out there, but during the episodes packaged here, the creators hit a bit of a slow patch. Though there are some great moments like "Virus," "Crying" and "Radio," earlier (and some later) episodes just seem funnier. The DVD couldn't make these episodes look or sound any better, and the extras (when you can find them) are pretty good. Fans of the series should pick it up just to see it in a larger format, but the curious should definitely watch a few e-mails on the Web site first. After all, the material is essentially all available for free online, and it's only going to be worth it if you really want the extras.