The Movie
Will Ferrell could go to the bathroom on my dog, and I think I would laugh, at least for a few seconds. Hell, that could be the plot of his next movie, and I will at least rent it, as there's very little that this man has done that hasn't at least made me smile. There's something about his everyman demeanor, his voice and the coiled-spring emotion hidden beneath his surface that is so primal it connects like a soccer ball to the groin (a comic staple seen here almost as often as Ferrell.)

Kicking & Screaming puts Ferrell into a rare position for him: a genuine adult. Phil Weston has a wife and kid, a house and an honest job as a pharmacist. The only thing missing are the dog and picket fence. He also has a father named Buck (Robert Duvall) who is competitive to the Nth degree. Buck coaches Phil's son Sam, along with his own young son Bucky (Sam's uncle), on a local youth soccer team. Buck is so competitive that he trades Sam to the worst team in the league, for no return. The team is so bad, that the coach has split town, forcing Phil to take over.

Having spent his whole life trying to please Buck, he is now in direct competition with him. From there on out, the film relies on plenty of sports film cliches, while adding a few new touches here and there, most of which require Ferrell to pull them off. Recruiting Buck's neighbor Mike Ditka (played by himself) to help him coach, Ferrell falls into an addiction to coffee (which, with Ferrell playing the role, was a genius-level idea by the writers) and an utter impersonation of Ditka, right down to the clothes. Aided by montages, the story might be one you've seen before, but with Ferrell, it's much better.

Since the film centers around the soccer team, much rides on the kids, who are loaded with the lovable quirks that make fans of films like The Mighty Ducks and The Bad News Bears. From a smart-alec wannabe comic to the superheroic Italians to the oddball worm-eater, there's plenty of chances for diversions when the soccer becomes too much. Chief among them is little Elliot Cho, who, as the Korean Byong Sun, provides some the best "Aww" laughs of the film.

Unfortunately, since this is a family film, much of the cast is somewhat wasted. Though Ferrell and Duvall are both good in their parts, capable of burning hot as egomaniacal coaches, fine comic actresses like Laura Kightlinger, Rachael Harris and Alex Borstein ("Family Guy") have to play toned-down parts, and Dave Herman (Office Space, who plays the ref, is essentially a pointless character, who does nothing funny between a potentially funny introduction and the very end of the film.

While the story feels a bit formulaic and stilted at times, it's much better than other examples in this genre, thanks to Ferrell and a script that was tailored for his abilities. Director Jesse Dylan (American Wedding) made some interesting choices, including one that ended up on the cutting-room floor (see The Extras), bit overall, it seemed a bit unsure as to what kind of film it was going to be. Had the movie pushed some of the more bizarre aspects further, this could have been a real winner, instead of the tie it feels like. 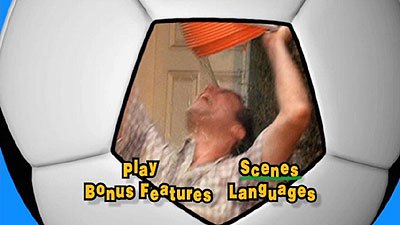 The DVD
Universal is releasing Kicking & Screaming in two versions: an anamorphic widescreen edition and a pan-and-scan full-frame version. Thankfully, DVDTalk was provided only the original aspect ratio. The disc is packaged in a single-width black keepcase, with a coupon for a salad mix that doubles as an ad for an NBC show (no free advertising here.) An anamorphic widescreen animated menu kicks things off, offering the choice to play the film, select scenes, adjust languages and view bonus features. Animated transitions reveal scene selection menus, with still previews and titles for each chapter, along with the language options, including English, Spanish and French 5.1, as well as English, French and Spanish subtitles. Closed captioning is not included.

The Quality
Universal did a nice job with this 2.35:1 anamorphic widescreen transfer, presenting the film with proper detail and nice, bright, appropriate color. At times, the image can get a bit soft, but not enough to be very noticeable. There's no obvious concerns, and no signs of dirt or damage. The film looks very good.

The sound, done in Dolby Digital 5.1, is solid, but there's not as much in terms of surround sound effects for a sports comedy. With all the soccer action, more was expected. It's not a boring mix, with some sound in the rears and sides and emphasized music, but I've heard better.

The Extras
When you've got Ferrell and his ability to improvise, to not include some footage that didn't make it into the movie would be a crime. Thankfully, Universal decided to abide by the law, and put in three groups of such scenes. First up are the red cards, or scenes cut from the film. These are presented in a 12 minute-long reel. It's a surprising amount of footage to be cut from a lighthearted family film, but the Saving Private Ryan parody is worth a look. These are followed by eight minutes of outtakes. There are some very funny moments here, as Ferrell almost dares his costars to crack-up. Also on this DVD is just over five minutes of alternate footage from the film on this DVD. It's Ferrell going off script, and it's funny, especially when he's opposite Ditka.

"Kickin' It With The Kids" is a short piece on the kids in the film, and how the crew and cast worked with them. It's just over three minutes long, and could have been a part of the old "Kids Says the Funniest Things" show. "Soccer Camp," which runs around seven and a half minutes, looks at the kids' preparation for creating the soccer footage in the film. Most of it is kids acting goofy, with interviews with the film's soccer consultants mixed in. If you're interested in the process of making a sports film, it might be interesting, but it's not too in-depth.

The nine-minute featurette on the film's Italian stars, "From Rome to Hollywood," is much more informative, following the young actors/players from their auditions back home to their experiences on and off the field. "Behind the Net: The Making of Kicking and Screaming" puts the spotlight back on the adults in the movie, including Duvall, Ferrell, Ditka and some of the creators, as well as some of the more talkative kids. While it does have some of the "Isn't he great?" factor, it's a relatively entertaining 12 and a half minutes of smoothly-edited on-set footage.

The extras are decent for a movie that isn't exactly art, but more Ferrell would have been welcome.

The Bottom Line
This isn't the usual flat-out funny Ferrell film, but it's not A Night at the Roxbury either. What it is, is a fun family movie starring one of the funniest actors working. There are plenty of laughs, along with some cute stuff and a decent, if predictable storyline. The DVD delivers the film with good quality, and a handful of extras that won't blow anyone away, but at least they provide more Ferrell. This is a pretty safe pick-up for most Ferrell fans, but keep the expectations lower than expected, as this is a relatively safe performance from the Cowbell Man.