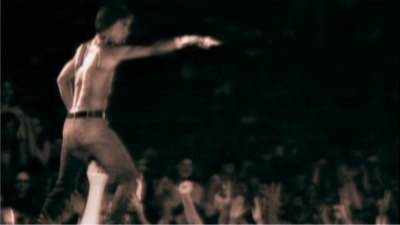 OK, confession time: I don't know jack about punk music, or at least I didn't until I sat down to watch Don Letts' Punk: Attitude (2005). Up until this point, my knowledge of punk included a handful of random classic albums and a viewing of Sid and Nancy on cable a few years back. I'm obviously not a serious fan of the genre: I wouldn't mind if it was playing, but I wasn't compelled to seek it out. Even so, I consider myself a fairly open-minded music fan: with the exception of most Top 40 garbage and country, I'll listen to just about anything. Luckily, the film was there to walk me through the early years of the genre: from Black Flag to X-Ray Spex, there aren't many stones left uncovered.

For starters, this isn't a typical by-the-books documentary. As emphasized by the title, Punk: Attitude is a celebration of style and, yes, attitude more than the actual music. It's easy to tell that punk is a genre based on shaking up the status quo---after all, it embraces independence and a strict do-it-yourself attitude that goes against the grain of the music industry (and not always just for shock value, though most outsiders end up shocked anyway). This is also a genre that doesn't waste time: typical punk songs rarely need more than three or four minutes (and the same number of chords) to get their point across, often employing sharp, loud lyrics to help out when needed.

Also, most parents hate it. What more could a kid ask for? 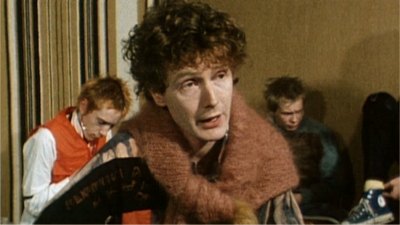 Culled from interviews with dozens of performers---including Henry Rollins, members of The Sex Pistols, The Clash, The Ramones (well, Tommy, at least), MC5, New York Dolls and more---Punk: Attitude does an excellent job of respecting its founders. Many of these guys and ladies are really starting to look their age, while most in absence have been gone for years. Even so, it's good that so many were willing to share there thoughts and memories; after all, you never know how long these folks will be around. A mountain of vintage concert footage and printed material helps to establish a real sense of history here, from classic album art to footage of rare performances. All in all, it's a well rounded show that fans of punk's early years should really enjoy.

Still, there are a few things that keep Punk: Attitude from being more successful than it is. For starters, it's simply too short for its own good: at just under 90 minutes in length, it's tightly paced but feels rushed in several areas. The lack of attention to punk music from the 1980s onward makes this film more of a historical piece rather than an all-inclusive account of the genre. Sure, groups like Sonic Youth, Agnostic Front, Minor Threat and Bad Brains are mentioned and briefly discussed, but a more modern perspective of newer music would have really helped out. If you're new to the genre, watching Punk: Attitude may lead you to believe that punk rolled over and died twenty years ago. Sure, mainstream bands like Green Day may not seem like much when compared to the originals, but a look at modern independent artists would have been much appreciated.

Even so, Punk: Attitude is a very informative look that should thrill fans of the classic bands it pays homage to. The newer interviews show that these artists still love the music that started it all, even if their faces have changed a bit. Don Letts has done a terrific job of keeping things organized; from the vintage material to the film's tight pace, this is a package that music fans should enjoy. The DVD from Capitol Entertainment features a slick technical presentation and packaging, as well as a wealth of informative bonus features. All in all, this 2-disc set does an excellent job of covering some of the bases that the film couldn't. Let's see how this one stacks up, shall we?

Video & Audio Quality:
Presented in its original 1:78:1 aspect ratio, the anamorphic widescreen transfer for Punk: Attitude looks very good. Modern interviews are sharp and clear, while vintage concert and performance footage looks rough but watchable. There's a very small amount of edge enhancement for some of the older stuff, but this still looked to be an excellent transfer that won't disappoint.

The audio mix defies its basic 2.0 Surround roots, coming through as loud and clear as needed; though it may have benefited from a full 5.1 treatment, this is a disc you'll still want to play at high volume. Dialogue is easy to understand (except for the lyrics, of course!), rounding out a terrific technical presentation overall. English, Spanish and French subtitles have also been included. 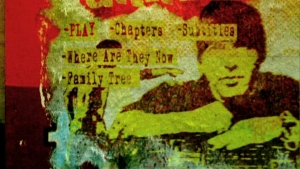 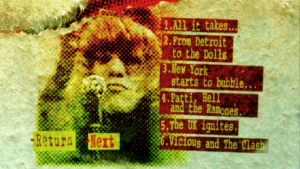 As if the A/V quality weren't good enough already, Punk: Attitude also benefits from a top-notch presentation and design style. The main menus (seen above) convey the proper atmosphere without sacrificing navigation, giving it a rough but polished look. The 90-minute film has been divided into 12 chapters, while no layer change was detected during playback. The packaging is also very sharp, as this 2-disc set is housed in an attractive foldout digipak case with a matching slipcover. An insert booklet has also been included, but that'll be mentioned in more detail soon enough.

Bonus Features:
Though it's a shame there's no commentary on board, this 2-disc set is still loaded with great bonus features. First up on Disc One is a massive text-based supplement called Where Are They Now? which briefly references over 75 punk legends: who they are, what they did, and what they're up to these days (unless they're no longer with us, of course). Another handy text-based reference guide is up next, entitled The Punk Family Tree; it's similar to the first supplement, though this one's laid out in more of a chronological order and neatly grouped by individual bands and performers. 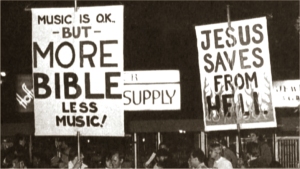 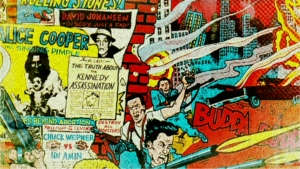 Disc Two contains the lion's share of extras, starting off with a A Brief History of L.A. Punk (1976-1980), a section which contains a short film of the same name and an article by Don Waller. The film itself (above left, 22 minutes), directed by Dick Rude, offers a candid look at the scene from those who witnessed it firsthand and is presented in non-anamorphic 1.78:1 widescreen. Interestingly enough, this section also provides contact information for the filmmakers and the art curator who provided most of the vintage visuals. There's also Extended Interviews with Henry Rollins and Dave Goodman (25 minutes total), which go into detail about their respective roles in punk history.

Up next is a generous handful of Featurettes about several aspects of the genre, most of which are self-explanatory. These include Fanzines (above right, 12 minutes), Fashion (9 minutes), Women in Punk (9 minutes), the role of Record Companies (5 minutes), Attitude and Spirit (8 minutes), Influence and Origins, (12 minutes), Culture and the Arts (7 minutes), The UK Versus the US (11 minutes), Evolution (10 minutes), Gigs and Performances (10 minutes) and The Punk Sound (8 minutes). A "Play All" option would have been helpful, but it's hard to complain overall. Each featurette is presented in anamorphic widescreen and has been filmed in the same style as the main feature.

Last but not least is the included insert, which is a Reprint of Sniffin' Glue (Issue #7 from February 1977), one of the music world's first fanzines. It's a very thoughtful inclusion and should be of much interest to history buffs. All in all, this is a very comprehensive list of stuff; even though several featurettes repeat ideas explored in the main feature, it'll be hard to find a more thorough package.

Even if you aren't a huge fan of the punk genre, any lover of music history would do well in giving Punk: Attitude a spin. Though the film itself could've dug a little deeper in certain areas, the wealth of bonus features more than makes up for this problem. Capital Entertainment has done a excellent job in all other departments as well; from the DVD's excellent technical quality to a sharp overall presentation, this is a well-rounded release that fans of the film will certainly enjoy. The asking price may seem a bit high, but Punk: Attitude is worth hunting down and easily comes Recommended.

Randy Miller III is a moderately affable art instructor based in Harrisburg, PA who also enjoys freelance graphic design and illustration. When he's not doing that, he enjoys slacking off, general debauchery, and writing things in third person.