Sequels and spinoffs are hard to do.  Just look at The Matrix.  The problem is that the creators have to come up with a movie or show that is just like the original, but different.  If the sequel is too similar, it comes out as a cheap copy of the original.  If it is too different, it loses the charm and excitement that made the original so popular.  It's a fine line to tread .

That's why I approached Stargate Atlantis with a certain amount of scepticism.   I really enjoyed Stargate SG-1 and was afraid that this spinoff would, to put it none to lightly, suck.  Happily my fears weren't justified.  Stargate Atlantis is a good show that manages to capture the spirit of the original show, without mimicking it too closely.  Now the first season of this entertaining show is available on DVD.  Hopefully it will be the first of many season sets.

If you haven't seen Stargate SG-1, or at least the movie Stargate, you might be a little confused at the beginning, but the show explains all you need to know in the first episode, Rising.  There are Stargates in our galaxy that allow people to travel from planet to planet in the blink of an eye.  They were built long ago by The Ancients, a race that has long since disappeared, but who had a presence on Earth.  As the show opens, Dr. Daniel Jackson (Michael Shanks from Stargate SG-1) discovers that the Ancients moved their city, Atlantis, to the Pegasus Galaxy.  He also determines the dialing sequence that will open a stargate in their city.  The only problem is that it will take an incredibly large amount of energy.  There is a source that can generate the power, a Zero Point Module, but there's only one of them, so anyone going will be trapped in Atlantis unless they can locate a working ZPM somewhere.

An expedition is organized, and a group of scientists, doctors, and military personnel gate to the distant Galaxy.  Lead by Dr. Elizabeth Weir (Torri Higginson) they arrive safely to discover a technologically advanced city hidden beneath the sea that has been abandoned for 10,000 years.

After discovering a recording the team learns (at least partially) what happened to the Ancients.  It seems that they managed to settle planets all across the galaxy, until they reached a world and awoke an ancient evil.  This evil force went from planet to planet destroying everything that the Ancients had built.  The battle reached the gates of Atlantis itself. 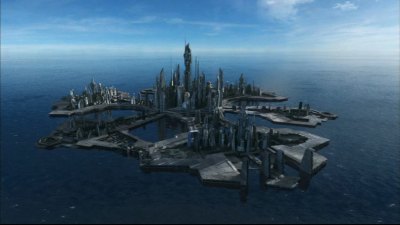 Not only do the explorers have to worry about a race that was able to defeat the Ancients, but they also find out that the force field that keeps the ocean from crushing the city is running out of power and they only have a few days before the city, and the explorers, are destroyed.

Gating to their first world in hopes of finding a place to evacuate to, Major John Sheppard (Joe Flanigan) and his team discover a peaceful race, the Athosians.  They also find the Wraith, a super-strong alien race that feeds off of human's life force.  The Wraith attack every inhabited world and harvest people for their food.  When several members of the away team are snatched, Sheppard and the Athosian woman Teyla (Rachel Luttrell) launch an attack on the Wraith Hive ship.  They manage to rescue their comrades and even manage to kill the head Wraith.  That was a big mistake though.  It turns out that most of the Wraith were hibernating, waiting for the human population to grow so they can cull their herds again.  But now that one of their kind has been killed, all of the Wraith in all of the hive ships across the galaxy are awakening.  They are going to feed to get their strength back, then attack this new threat en mass.  They've already laid waste to the Athosian village, and the survivors have taken refuge in Atlantis.

So now the new inhabitants of Atlantis have to try to learn as much of the Ancient technology as they can, and make as many allies as possible, not to mention finding food and supplies for themselves, before time runs out and the Wraith attack.

The reason Stargate SG-1 was such a good show was because of the characters.  Over the seasons you grew to know them.  They were three dimensional characters who had strengths and faults.  Stargate Atlantis takes the same approach.  They have a cast of interesting characters who are put in a tough spot.  The great thing about Atlantis is that they didn't try to clone the people from SG-1.  Sure, some people have similar traits, but no one would ever accuse John Sheppard of being a copy of Jack O'Neill, and the same goes for the rest of the cast. 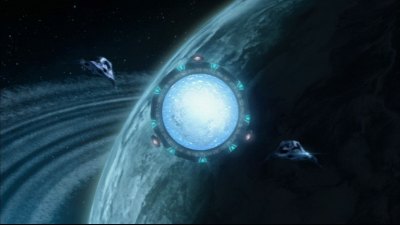 Like SG-1 and the Goa'uld menace, Atlantis has the Wraith.  From a story point of view, this is a great menace.  It gives them a reason for searching other planets and contacting other tribes, while also giving the excuse for some good space battles.  Though the threats are similar, they are handled differently, and this show has a distinctive feel.

The show also has a good sense of humor, and SF fans will enjoy the many Star Trek references that are thrown in every now and them.  From Sheppard telling the medical doctor who doesn't like traveling by Stargate to "stop acting like McCoy" to Dr. McKay's exclamation when finding Sheppard in a compromising position with an alien ("Oh my God, he is Kirk!") this running joke plays very well.

One surprising thing about the show is that they manage to take some standard SF themes and give them a new spin.  The plot elements from Logan's Run, Andromeda Strain, and the Star Trek episode Shore Leave are used (among others), but in the end none of these shows seem like copies.  They all have a unique twist that makes them interesting.  (One of my favorite episodes is a take off of Die Hard where one lone solider has to take on a group of terrorists who have hostages.)

Like its predecessor, this program has a lot of continuity that really draws in the viewers.  Not only are the Wraith a threat, but there is a civilization, the Genii, that harbors ill will towards the Atlantis group and they manage to turn up at unexpected times.  They refer to past events too, which makes the show feel more natural.  There are also several stories that are ripe for a revisiting, such as the status of the Hoffans from the episode Poisoning the Well, which will make me continue to watch.

When all is said and done, this is an excellent sucsessor to SG-1. Atlantis manages to capture the excitement and fun of the earlier show, without coming across as a carbon copy and also having some original ideas.

These 20 episodes come on 5 DVDs in three clear slimline cases with double sided covers.  The three cases are enclosed in a nice slipcase.  The whole thing is much thinner than the SG-1 sets, which is nice for those of us running out of room for our DVDs. 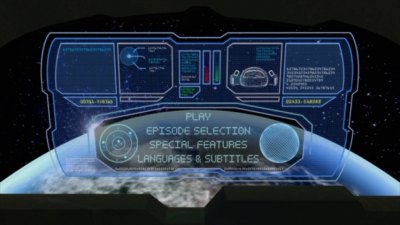 This set come with an English 5.1 soundtrack as well as a stereo mix in English and Spanish.  These shows sounded very good.  The background music was clear and there was a full range of tones.  The full soundstage was used to good effect, and the fight scenes had a lot of impact with machine gun fire and laser blasts coming from all corners.  Needless to say, there were no dropouts or distortion.  There are subtitles in English, Spanish Portugese and French.

The widescreen anamorphic image looks outstanding.  The show is recorded and mastered on HD video (as opposed to 35 mm film) and the image is very sharp and clear with very good definition.  Small details like the stubble on Shepard's chin come through fine, and the colors are bright.  Digital defects are nonexistant.  Overall, an excellent looking show.

There are a good number of bonus items evenly scattered across these six discs.  The first thing of note are the many commentaries.  There are 14 in all!  I was really surprised at how many commentaries there were, giving all of the major characters, writers, and directors a chance to talk about the show.  These ranged in quality, but none of them were bad.  The commentary to the pilot episode by director Martin Wood and Joe Flanigan (Major John Sheppard) appears to be the same one from the earlier release of the first episode.  It was very entertaining and informative and well worth a listen.  I was surprised by some of the choices though.  Having Paul McGillion (Dr. Becket) comment on Thirty Eight Minutes was a little odd since he was hardly in that episode.  In any case, there is a lot of behind the scenes info both of a technical and personal nature.

In addition to those, there are a lot other extras.  Disc one has an 11 minute tour of the Stargate Atlantis sets hosted by writer/director Martin Wood and director Peter DeLuise which was interesting, but the comments by the hosts was really hokey.

Disc two has the Diary of Rainbow Sun Francks (9 minutes).  Francks, who plays Lt. Ford, one of the major supporting characters, talks about his experiances during the show's first season.

Wraithal Discrimination: It's Not Easy Being Green is an 11 minute featurette looking at the wraith.  Its rather irreverent and a lot of fun.  The other feature on disc three is Mission Directive: The Storm/The Eye a six minute look at this two-part episode.  Most of it deals with how the created the storm and how uncomfortable the actors were when they were soaking wet for hours.

On disc four there are two more Mission Directive behind-the-scenes shorts; one for Sanctuary and one dealing with Before I Sleep.

Disc five rounds things off with A Look Back at Season 1 with (writer and series editor) Martin Gero (17 minutes) and Mission Directive: The Siege an 11-minute short dealing with the two-part concluding story.

There is also a photo gallery on each disc.

Stargate Atlantis is a very good spinoff from Stargate SG-1.  It manages to incorporate the good elements from its parent show while still being new and unique.  The characters are interesting, the writing is good, and the show has a lot of action with a good dollop of humor.  If you haven't been watching Stargate SG-1, this show is still pretty accessible.  You won't know what a Zero Point Module is, or what a Naquada Generator does, but it's pretty easy to figure out. If you're a fan of the earlier show, you won't want to miss this.  Highly Recommended.