Exactly thirty years after his classic Scener ur ett äktenskap a.k.a Scenes from a Marriage (1970) Swedish filmmaker Ingmar Bergman has decided to put an end to a career which gave the world the opportunity to witness one of the greatest directors ever to step behind the camera. His latest film named simply Saraband is indeed a fitting epilogue to a body of works which future generations will most certainly explore with a great sense of admiration.

A massive European project involving Sweden, Italy, Germany, Finland, Austria, and Denmark, Saraband is a logical extension of a relationship we first witnessed in Scenes from a Marriage some thirty years ago. Marianne (Liv Ulmann) has decided to visit her divorced husband Johan (Erland Josephson) who is living a peaceful life deep into the Swedish countryside. Upon arrival, however, she encounters Johan's son Henrik (Borje Ahlstedt) who has been unable to rebuild his life after the death of his wife. Finding temporary solace in his daughter's passion for the cello Henrik often reveals a side of his character which Marianne finds deeply disturbing. Determined to counterbalance his son's erratic behavior by encouraging his granddaughter to enroll in the prestigious Stockholm Conservatoire, and therefore contradicting Henrik's wish that she stays with the family, Johan is once again faced with both admiration and condemnation. 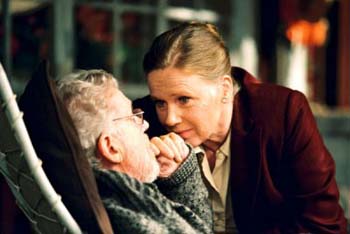 Ever since I found out that French arthouse label MK2 were planning to release a commemorative special edition of Bergman's last feature film I have been eagerly anticipating to wrap my hands around a deserving North American release. Now that I have it in my hands all I can say is that the world of cinema will most definitely lose one of its greatest directors, it is as simple as that. I feel both happy and perhaps a tiny bit sad looking at Saraband as undeniably we are given the chance to see the closure of an unusual story which started a long time ago. In addition, this film truly feels like the deserving epilogue of a book which time and time again we have been coming back to re-read and enjoy a journey no one believed will evolve into such a memorable experience.

Much could be said about Saraband and the manner in which the film is composed. The story appears unusually relaxed even for my taste and the easiness with which Bergman has managed to revive his characters is indeed most impressive. The long continuous camera shots, the enormous emphasis on detail, the fine role which music is given in this film certainly point out to a director who has accomplished most if not everything a great visionary could. Indeed there are very few secrets which Bergman's camera fails to reveal through Saraband. Take for example the scene where Marianne first enters Johan's house. It has been almost thirty years since they have parted ways. He is asleep, she is excited yet afraid to touch his hand, time appears to have stopped. What a glorious piece of cinema!!

It is clear that this fractured story of complicated relationships was meant to evoke a sense of nostalgia. At least that is how the film resonated with me. However, while on the surface Saraband very much looks and feels like a reunion picture underneath it there are a number of smaller stories which Bergman has interconnected using a formula we first witnessed in Scenes from a Marriage. Obviously the tension between Henrik and his daughter was designed to echo the rekindled harmony between Marianne and Johan so that Saraband emerges as a film of contrasts, an updated version of sorts, where the same issues Scenes from a Marriage investigated are now being analyzed through a different generation of actors. 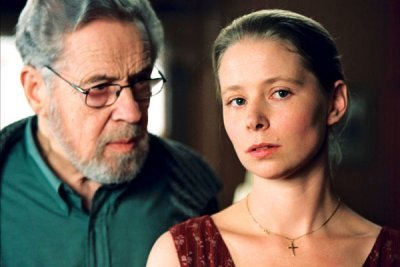 Since Saraband's premiere I have seen a number of different "readings" of this film ranging from claiming that this is a poignant love story between two human beings unable to cope with the burden of age to some curious claims stating that Saraband is a unsuccessful replication of a story which has nothing left to reveal even though its main characters are now much older and wiser. Regardless of where your preferences fall I am certain you will see Saraband as the fitting epilogue to the career of a filmmaker which has nothing left to prove. This is a film with an exceptional degree of sophistication which very few contemporary directors, if any, know how to accomplish. Above all, however,Saraband is a film that not only compliments but successfully puts closure to the career of the greatest Swedish film director ever. Bravo!!

Saraband was designed to be a TV production and as such Bergman favored the use of DV camera. The result as you might guess is a spectacular looking film where colors, contrast, and definition are simply superb. In fact, many theaters throughout Europe were required to show the film with digital projectors. The reason I mention all of this is so that you could get an idea how beautiful to look at Saraband is. Sony have presented the film in its original aspect ratio of 1.78:1 and have enhanced it for widescreen TV's and I can hardly be any happier with the results. Just a stunningly beautiful replica of the original theatrical print this DVD is a pure treasure. For once I am most impressed with the quality a North American company has provided for a foreign film wich truly deserves to be in your collections. Well done Sony!!

Presented with its original Swedish Dolby track and optional English, French, and Portuguese subtitles Saraband sounds spectacular. The sound is crisp, clear, and very easy to understand. The only minor complaint that I have with this presentation is the inclusion of the yellow subs which Sony seems to be favoring at this time. As far as I am concerned white subtitles have proven to be the preferred option amongst the more demanding cinephilles.

Even before the Swedish TV premiere it became apparent that Bergman will be rather unwilling to discuss Saraband in great length leaving the film to speak for itself. Therefore I was not expecting much in terms of extras on this DVD. As it appears Sony have provided us with the only substantial extra which also appears on the MK2 disc- a rather long "Making of Documentary".

Now that the R1 release is finally on the US/Canada market you will have to work hard to convince me there is a credible reason why you don't have this film in your collections. I can not imagine anyone with a serious interest in cinema not owning what appears to be the last film to come out under Bergman's camera. Saraband provides a fitting closure to the career of the greatest Swedish director ever and rightfully we give this DVD presentation the DVDTALK COLLECTOR SERIES mark!!!