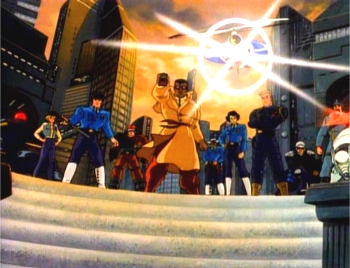 Not to be confused with the long-running "reality show" of the same name---though it earned a name change in syndication for that very reason---animated cult favorite COPS (1988-1989) was a minor but memorable beacon in the 1980s sea of merchandise-driven cartoons. The premise was simple enough: COPS was a futuristic take on Dragnet and the like, though one that heavily favored comic book-style action and characters over proper police procedure. Each episode centered around a case file that, in the standard style of Saturday morning cartoon fare, was wrapped up neatly in just over 20 minutes flat. Not counting commercials, of course.

Set in the year 2020 in fictional Empire City, COPS (Central Organization of Police Specialists) includes the standard amount of technological advancements that probably still won't arrive for at least 50 years (if ever), but us kids weren't thinking about that technical junk. It's essentially "cops and robbers" with tons of cool gizmos, tailor-made for toys action figures and other stuff we had to have. Our heroes included Agent Baldwin "Bulletproof" Vess, Sergeant P.J. "Longarm" O'Malley, Officer Tina "Mainframe" Cassidy and more, while the baddies were represented by Brandon "Big Boss" Babel, Turbo Tu-Tone, Buttons McBoomBoom and the like. These aren't three-dimensional characters by any stretch, but at least most of them were a bit different from the norm. In addition to this, COPS generally featured solid stories that mixed action and humor fairly well, resulting in an entertaining blend that helped set it apart from the pack.

Created by Kevin Altieri---who also worked on the excellent Batman: The Animated Series---COPS burned brightly but didn't last very long, earning the majority of its cult status in syndication under the new name Cyber COPS. A previously released DVD collection (entitled "Fighting Crime in a Future Time", the show's tagline) contained the first three episodes, but Shout Factory has officially resurrected the series with a more detailed 4-disc set that gives fans much more bang for their buck. Let's see what this package includes, shall we? 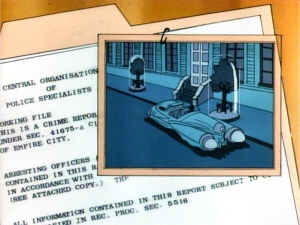 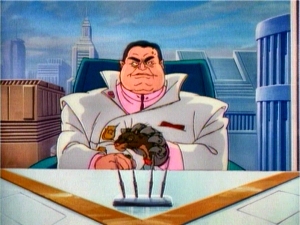 Presented with the original opening and closing credit sequences---along with a handful of post-episode PSAs thrown in as bonus features---COPS has made a relatively smooth transition to DVD. Surprisingly, the series has aged fairly well: it's always been slightly above average in the story department, with each of these 22 episodes breezing by quickly (and only a handful of wince-inducing moments, unlike most other series of that era). Tightly paced and easily digested in small portions, this is a solid collection that will hopefully be the first of several from Shout Factory. Without any further delay, let's see how this release stacks up:

Shout Factory is hit-or-miss with their DVD transfers, and it looks like COPS: The Animated Series is just above average. Presented in their original 1.33:1 aspect ratio, these 22 episodes are generally clean and bright in most scenes, while the image is a bit soft and over-saturated in others. All things considered, this series looks decent for its age and shouldn't disappoint fans in the least. The audio is a little thin at times, but this straightforward 2.0 Stereo mix comes through fairly clean and clear (and yes, the music is still pretty catchy!). Unfortunately, no subtitles or Closed Captioning options seem to be included with this release. 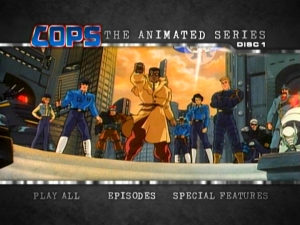 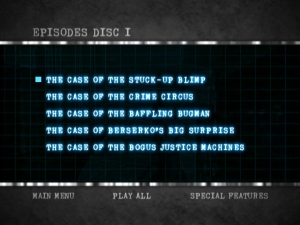 Suited to the series' atmosphere and style, the menu designs (seen above) offer a clean layout and easy navigation. Each 22-minute episode has been presented without chapter breaks, while no apparent layer changes were detected during playback. The actual packaging for this 4-disc set is unknown, though this screener came in a thick keepcase with two double-sided hinges inside. No booklet was included, though final packaging may vary slightly.

Bonus Features:
I was surprised to see any extras at all, so it's even better news that the ones on board are fairly good (if not a bit too brief). For starters, all four discs include slideshow-style Art Galleries with themes of "Cops", "Crooks", "Vehicles" and "Empire City" represented on each one, as well as Concept Painting Galleries for episodes #1, 7, 12 and 20. Other art-related features include a Storyboard-to-Screen Comparison for the series' opening sequence on the first disc.

Last but not least is a series of nine wonderfully cheesy "COPS for Kids" shorts (:30 each, three apiece on Discs 2-4), which aren't far off from G.I. Joe's "Knowing is Half the Battle!" public service announcements. It's a short but sweet mix of extras overall, though a few interviews or audio commentaries with the creative team would've been helpful.

The DVD presentation from Shout Factory could've been a bit tighter, but it's hard to complain when we're getting 22 solid episodes and a few nice extras for around $30. With the growing problem of overpriced 1980s-era cartoons on DVD (Thundercats, anyone?), it's refreshing to see a quality package at a very reasonable price. Those with fond memories of Bulletproof and company should have no problem enjoying this release, while anyone new to the series should undoubtedly give it a rent first. It's not "sleeper hit of the year" material, but COPS: The Animated Series is still a solid collection worth hunting down. Recommended.