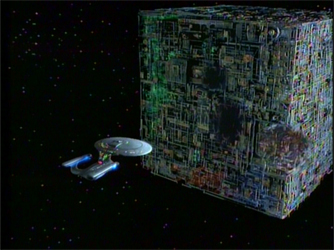 Now that all of the Star Trek franchise been released on DVD in complete seasons it seems like a moot point to release compilations of episodes. Then again, considering the MSRP for many of those boxed sets it may not be. I don't know about you but I personally haven't been able to invest in picking up all of the series yet because of the price tag. Thankfully the costs seem to be deflating somewhat and retailers around the web are selling them at much more reasonable prices. Until then Trekkies on a budget may want to pay attention to the Fan Collectives that are being released.

Not long ago on the Startrek.com website they ran a poll where fans could vote for what themes were their favorites over the years. It would seem that the Borg assimilated the competition because they ranked number one when the results were cast. Over twenty-thousand people voted for the race of cyborgs so here we are with a collection of the fan's ten favorite Borg episodes.

This compilation is loaded with the best of the best that the Borg had to offer. Instead of being organized on the four discs in this set according to their broadcast dates the episodes here are presented according to the Trek timeline. That means that things on this set get kicked off with an offering from Enterprise's second season called "Regeneration". 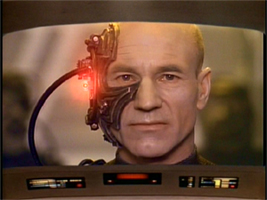 I have to admit that as much as I enjoyed Enterprise, I cried fowl at first when I saw that there was going to be a Borg episode. This was mostly because of the continuity holes that it represented, but then again I'm pretty easy going as a Trek fan and more forgiving than most. The way that the writers worked the Borg into the timeline, using a bit from events in First Contact, was pretty creative. It's not as good as say, "The Best of Both Worlds" (but then what is) but it's entertaining as an action oriented Trek plot.

The next episode on the first disc is the actual "introduction" of the Borg. For those of you who may not be aware, it was Q that originally catapulted Picard and his crew across the galaxy to the Borg's doorstep. Needless to say the contact didn't go so well, some no-name crewmembers bit the dust, and at the end of the day Q got his jollies at Picard's expense. The Borg are very impressive portrayed as a new adversary, but the real charm of "Q Who?" resides with Q himself. John de Lancie has always been brilliant with his portrayal of the omnipotent being and this was one of his best episodes.

After "Q Who?" is the crème de la crème on this collection in my opinion. Believe me when I tell you that it doesn't get a lot better than "The Best of Both Worlds" Part 1 and 2. I don't think it's possible to be a Trekkie and have not seen this infamous TNG season finale. The Borg come to assimilate Picard into Locutus in order to use him as a spokesperson as they conquer the human race. The two-parter is dramatic, full of action, and is easily one of the most prominent plots from the TNG series. The Borg became a significant part of Jean-Luc's character and these episodes are the ones that put them on the map for most fans. 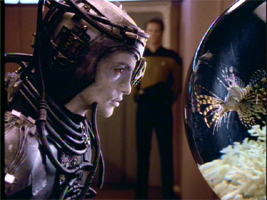 Following these episodes were "I, Borg" and "Descent Parts 1 and 2". "I, Borg" is an excellent stand alone episode that has the Enterprise crew rescuing a single Borg from a destroyed shuttle. As the crew nurses him back to health they unexpectedly start to bond with him and teach him what it means to be an individual. This type of story would be seen again in Voyager in more depth with Seven of Nine. "Descent 1 & 2" is a creative story I grant you, Data's brother Lore recruits a group of wayward Borg who seek individuality, but it never really held a lot of appeal for me. And then, at the end of the episode they all seem to just disappear back into the woodwork and the Borg are still just as bad and collective as ever.

Deep Space Nine never touched the Borg so the next time we see them is in a slew of Voyager episodes. If you are familiar with that series then you know that Janeway and crew played with the Borg a lot. It came to the point that I felt they were used as a gimmick to bring viewers back to Trek, but regardless of that there are some great episodes here. In particular, "Scorpion Parts 1 and 2" come to mind.

"Scorpion" was the season three cliffhanging ender and introduction to season four. It featured an alien race known as 8472 waging war with the Borg and kicking the Borg's butt. Voyager lucks into a method that will destroy species 8472 and decides to offer it to the Borg, who desperately need it, in return for safe passage through Borg space. Against her crew's advice, Janeway forms a tentative alliance with them that introduces Seven of Nine's character. I loved these episodes though I felt that the ending seemed to be a little too convenient and that it left many unanswered questions about the 8472 aliens.

"Drone" was a fun episode about a freak transporter accident involving the Doctor and Seven of Nine which resulted in the creation of a Borg clone made with technology from 500 years into the future. As a stand alone episode though that one was nothing compared to "Dark Frontier" which was an hour and a half mini-movie of sorts. The story was all about Seven of Nine being coerced into joining the collective again. It really helped flesh out her character considering there is a series of flashbacks all about her before she was assimilated.

"Unimatrix Zero, Part 1 of 2" was yet another set of episodes that fell at the end and beginning of a season. It presented an interesting idea about how some Borg developed a mutation that allows their unconscious mind to live in a virtual world with all of their old memories (and bodies) intact. The episodes were good overall, but it was the ending of the first part that really hit home the plot. 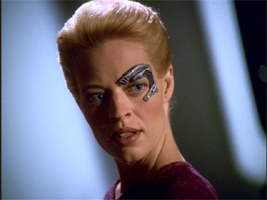 Wrapping things up on the Borg Fan Collective is the finale of Voyager, "Endgame". I was pretty surprised that they put this episode on the set, but considering that it has everything to do with the Borg it seemed only fitting, I suppose. "Endgame" featured a futuristic Janeway traveling back through time to meet up with Voyager in the delta quadrant to help them get home much quicker than she did. The only problem is that in order to do so they have to hitch a ride aboard the Borg interstellar highway. This episode also features the return of Alice Krige from the movie "Star Trek: First Contact" as the Borg Queen. Another actress played the roll in other episodes. The ending was a little too convenient but to be fair, I thought the episode was very touching and lot of fun.

Let's get one thing straight; I loved just about every episode on this set. Some were stronger than others, but even the weak links in the chain had something to appreciate. Of course being the Trekkie that I am I already have or plan to buy many of these on the season box sets. That's really how you have to approach this collection when making a decision about picking it up. Do you own or plan on owning the complete sets? If so then you'll want to save your $40. If you don't think you'll be buying into the seasons and want to see a whole lot of assimilation you really can't go wrong here. This is easily the best of the best that the Borg had to offer.

With a production range from 1989 to 2003 you're going to see a lot of variety in terms of video quality with this collection. The Next Generation episodes feature a fair amount of grain in the image, which is especially noticeable in "Q Who?" during several scenes. Otherwise the only negative trait that the video really features is a degree of softness due to the filming of the show; not the transfer. Things get progressively better as you move through the seasons and series. Everything on this set is presented with a 1.33:1 full frame aspect ratio aside from "Regeneration" which comes with 1.85:1 anamorphic widescreen.

The episodes here are presented with options for 2.0 of 5.1 Dolby Digital English tracks. The quality is very good as you'd expect with no real flaw to speak of as a byproduct of the remastering. The channel separation is very good though it gets gradually better as the episode timeline progresses. Even so there are some points where the audio comes across as flat, but at least I didn't notice any flaws with the presentation.

The only bonus materials included on this Fan Collective are some of the commentaries that made their way onto the season boxed sets. There is an audio commentary by Mike Sussman and Phyllis Strong for "Regeneration" and text commentaries by Michael and Denise Okuda for "The Best of Both Worlds Part 1 and 2" and "Unimatrix Zero, Part 2". These commentaries each offer a good amount of insight into the minds of the creators and give us a little bit of a behind the scenes look at Trek lore. 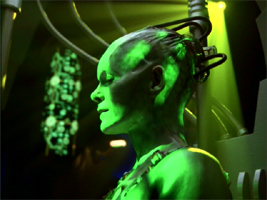 The bottom line for this collection is that if you already own some of the Trek seasons on DVD, there really isn't a lot of point to this release. This set is aimed towards fans on a budget who only want to see certain things and people who may be only casual viewers. With a "Fan Collective" for Time Travel and a recently announced Q collection on the way these are a great way to get some great Star Trek for a lower price. If you're part of the audience that this release targets then I'm going to highly recommend it based on the quality of episodes alone.