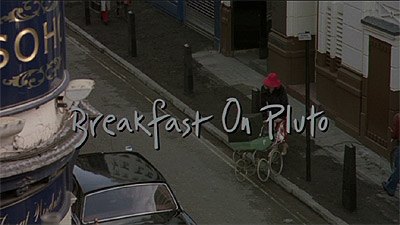 
The Movie
The tone of Neil Jordan's latest adaptation of a Pat McCabe novel is quite different than most of the films the director is known for, a fact that's obvious from the beginning. As a woman abandons her baby on the step of a priest's home, a pair of robins converse. Sure, it's only in subtitles, but usually such tactics are limited to Disney films, and not the serious work of a man like Jordan. But here it is, serving to hammer home the point that this is not your standard movie. After all, how could the life story of Patrick "Kitten" Braden (Cillian Murphy, Batman Begins) make a standard movie?

As a boy, Kitten is obviously different, trying on dresses, wearing make-up and dreaming of playing rugby in a full-length gown. If you weren't sure that he was an outsider, he's even given a "motley" crew of neighborhood pals, including a black girl and a boy with Down's syndrome. Life is not easy for this imaginative lad, but he seems to subscribe to the philosophy that the best tact is to look fabulous and carry a big wit, which he does in his Oscar Wilde-best.

Kitten's story reminds me in many ways of the story of Forrest Gump, if the story of Forrest Gump was reduced to a quarter of the scope, focusing on the years of The Troubles in Ireland. This unusual boy grows into an unusual man, and manages to live a life that brings him in touch with just about every experience that marked the time period. In another film, it might have come off as trite, but with the unique construction of the film, which is told in quick, tight chapters, it works. 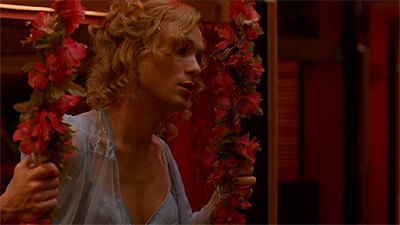 As Kitten flits through life, hoping to meet the woman who gave him up, he instead meets a colorful cast of characters, including a low-rent glam rocker (Gavin Friday), a manipulative magician (Jordan repertory player Steven Rea) and an angry costumed mascot (the enjoyable Brendan Gleeson). The mainly light-hearted story is tempered by a political undercurrent that pokes its head above water occasionally, forcing change in our hero's life, and helping to advance the plot, or what there is of one. Truthfully, the film's parts are greater than it's whole, coming together like an anthology, and as with any anthology, some parts are better than others.

Murphy is brilliant as Kitten, pulling off the cross-dressing part in a way that is alien, yet human, and certainly not cartoonish. His performance is incredibly soulful, using an affected voice and a pair of deep, expression-filled eyes to communicate the love and pain in his character. Though the film is informed with a definite sense of surrealism, seen frequently in scenes like the story he spins explaining why he was in the middle of a disco bombing, one never questions that this couldn't have happened. While gets plenty of credit for that realism, Jordan's experience in infusing Irish politics into his movies helps create an authentic feel.

The acting, writing and directing gets plenty of respect when it comes to building this world on-screen, the music is a huge part of why the atmosphere of Breakfast on Pluto works. The soundtrack lays down wall-to-wall aural carpeting, with well-known pop hits of the time, along with well-chosen rarities that put the viewer in the moment. It's obvious that this movie is not only a piece of art, but a piece of thought as well. 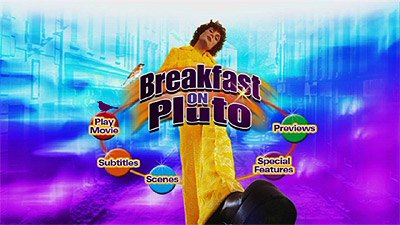 The DVD
Inside of the standard keepcase, you'll find a promotional Sony insert and a single-disc release of Breakfast on Pluto. The DVD has a static, anamorphic widescreen main menu, with options to watch the movie, adjust subtitles, select scenes, check out special features and see previews. There are no audio options, but subtitles are available in English, French, Spanish and Portuguese, along with closed captioning. The scene selection menus have still previews and titles for each chapter. The whole package doesn't feel like it took much effort.

The Quality
The 1.85:1 anamorphic widescreen transfer looks good, but not great, with quality color and detail. The image isn't as sharp are one might expect, but this may be a stile choice. Comparing it to the crisp transfer on Brokeback Mountain though, makes this feel like watching a movie through light gauze. Surprisingly, there's also obvious dirt seen in spots throughout this film, which is bound to be distracting to anyone who cares about such things.

The audio is presented in clear quality, with the dialogue heard without distortion, which is key, as the accents can be a bit distracting. The most obvious aspect of the Dolby Digital 5.1 soundtrack is the use of the surrounds to enhance the many songs heard in the film, but when required by the film, the sound can become incredibly bombastic, with brilliant directionality and force. Such displays aren't frequent, but when they are heard, they are great.

The Extras
There are only two extras on this DVD, though they are both decent supplements, starting with a feature-length audio commentary with Jordan and Murphy. I must admit, I had a hard time telling who was talking, as the two men have similar-sounding voices. In fact, I thought at first it was just Jordan, and it took me some time to figure out they were in the room together. They do share quite a few stories about the film's production, along with their thoughts about the material. Once you are able to settle things out, it's a pretty good track.

The other extra is "Behind the Scenes of Breakfast on Pluto," a featurette that runs almost nine minutes. Made up of mostly interviews with the cast and crew, with some on-set footage thrown in, it's an OK look at the way the film was brought together.

As is usually the case with Sony's DVDs, there's a load of previews included, but not one for Breakfast. 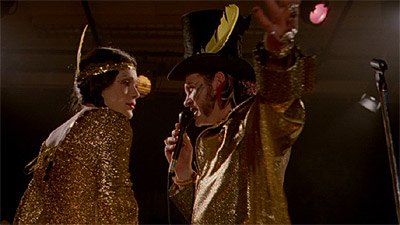 The Bottom Line
Fans of Neil Jordan's previous films can look at Breakfast at Pluto as a bridge between his Irish politics and lighter subjects, while maintaining the skill and style he's known for. Add in a splash of the bizarre and a top-notch performance by Murphy, and you have an interesting and entertaining film. The DVD does a nice job of delivering the film, though the extras are on the slim side. A blind buy isn't suggested, but if you like Jordan, there's a lot to like here.