Not-so-traditional American values from the mind behind "Family Guy"

Out-of-work following the cancellation of "Family Guy" and pissed about the results of the 2000 election, Seth MacFarlane and gang began putting together a new animated sitcom, centered around a parody of the newest plague of America: the Red Stater.

Stan Smith is a CIA agent whose only concern is protecting our freedoms, even if it means taking them all away. He trusts no one, unless they work for his government, and if you're not a red-blooded, born and bred white American, you may as well be the enemy. Stan is the ultimate reaction to 9/11.

Stan's family isn't the ideal CIA family though, at least all of his family not named Francine. His loving wife is loyal and doesn't question much, and is willing to let him cheat on her if it will help him. Sure, they have their arguments, like when he locked her in the basement for being an alleged spy, but in the end, she stands by her man. 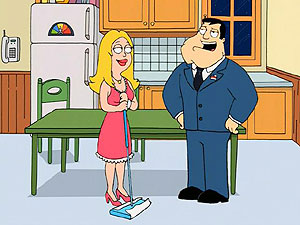 His kids are a different story. Steve is a total geek, who's definitely not a chip off the old block, while Hayley is Stan's worst nightmare: a liberal hippie into drugs and sex. And they aren't even his biggest headaches, with houseguests like Klaus, a fish with the transplanted brain of a German skier, and Roger, a lactating space alien with the personality of Paul Lynde.

The majority of the stories center around Stan's job, including the insta-classic two-parter "Stan of Arabia," in which he gets "promoted" to a new position in Saudia Arabia, revealing a new side of him. That makes obvious sense, since the series doesn't exist without its "American Dad."

Stan may be the most important character on the show, the characters of Klaus and Roger are much more entertaining. Their presence brings a enjoyable touch of ridiculousness to a show somewhat rooted in "reality." Klaus' filthy flirting toward Francine and Roger's needy grabs for attention rarely fail to amuse, but the writers wisely dole out their appearances judiciously, so as to not overexpose them and wear out just what it is that makes them special. The same goes for Stan's boss Bullock, who's voiced wonderfully by Patrick Stewart (yes... Captain Picard himself.)

Despite the series' obvious connections to "Family Guy," having emerged from MacFarlane's creative womb, the series kept its distance from that show by embracing a very different feel, and avoiding the types of gags that have made the original so popular. As a result, the series is fresh and fun, and with a healthy political bent, it's smart too.

The first 13 episodes of "American Dad!" arrive on three DVDs, with four episodes on each of the first two discs, and five on the third platter. Each is packed in a ThinPak case, which are held in a cardboard slipcase. The cases each have episode information on the back, including airdates, creative credits and synopses. 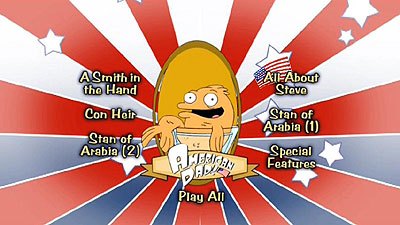 The discs have animated anamorphic widescreen main menus which list the episodes with a play-all option. Inside each episode is a static anamorphic widescreen menu, with options to select scenes, adjust languages or check out the commentaries. The scene selection menus have still previews and titles for each chapter, while language options include English, French and Spanish subtitles, along with closed captions.

The full-frame video on these discs is simply fantastic, with clean bright color and a near-complete lack of negative aspects like dirt or damage. The only visible problem is the usual trouble animation runs into, when thin black lines pixilate.

These episodes include Dolby Digital 5.1 soundtracks, which are actually well constructed, with good directionality, which creates a nicely dynamic presentation. Dialogue is clean, and the sound effect and music are solid.

These DVDs are packed with an impressive amount of bonus features, starting with the 12 episode-length audio commentaries, featuring an assorted cast of writers, directors, producers and actors, including three appearances by MacFarlane. Why not commentaries for all 13 episodes? Good question. Despite that mystery, these tracks are enjoyable to listen to, and frequently, some behind-the-scenes info is shared, mostly regarding story inspirations, casting, and scenes that were cut, though sometimes they get caught watching.

The rest of the extras are found on the third disc. "All in the Family: Creating 'American Dad'" examines the show, spending 20 minutes with the cast and crew to get their thoughts on the series. It's a pretty well-done piece of promotional fluff. A more focused version of the material can be seen in the five-minute "Secrets of the Glass Booth," which looks at the voice acting in the show. Together, they provide decent insight for the show's fans.

Two different ways to look at the show are provided next, starting with "How's Your Aspen?: 'American Dad!' performance at HBO's 2005 U.S. Comedy Arts Festival." The cast performs the script to "A Smith in the Hand," sitting on stage in front of an audience. The video supplements the performance by showing split-screens with the actual episode. By stripping out the cartoon, it puts the focus on the writing and acting, which is nice.

"American Animatics!" compares the animatics for an episode with the final animation, to show how the show progresses during development. 14-minutes long, it includes excerpts from several episodes. For a more in-depth version, there's the Table Read/Animatics comparison for "Threat Levels." Putting rehersal footage, animatics and final animation on the screen, and giving the viewers the chance to flip through three audio tracks from those versions. Thus, you can watch the episode with the table-read audio, or some other combination. It's an interesting idea, but without labels for the tracks, it can get confusing.

The 17 minutes of deleted scenes included are entertaining, and result in part from censorship. Unseen moments like these, which are referenced in the commentaries, give viewers something special to check out. The same can't be said for "The New CIA," the pre-game show promo for the 2005 Super Bowl promo, or "Bored," which promotes "Family Guy." These commercials are just OK, but provide a sense of completeness for this incomplete set. 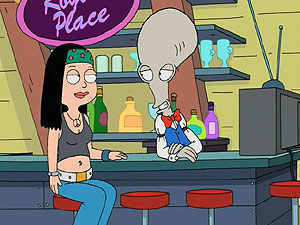 "American Dad" managed a rare trick by somewhat turning its back on a built-in audience, and trying something different. The resulting series ended up so good that fans on both sides of the "Family Guy" battleline can enjoy it. Though this set is too short by bringing only the first half of the first season, it does provide an excellent presentation along with a healthy supply of bonus material. Anyone who likes cartoons and seeing the political majority cut down should definitely check this box set out.