2005 isn't the first year that viewers cried foul when their favorite film didn't take home the "Best Picture" Oscar. Whether it's Gladiator (2000), Forrest Gump (1994) or dozens before them, we're not always going to be happy with what the Academy chooses as cream of the crop. This year's awards were no different: Munich and Good Night and Good Luck were casually brushed aside when Brokeback Mountain was "upset" by Crash (2004), immediately sparking a heated rivalry among rabid fans on both sides of the fence.

Though a vocal minority denounced Paul Haggis' tale of racism and prejudice in Los Angeles during its theatrical run---and soon after, upon its initial DVD release---as "manipulative" and "heavy-handed", the backlash increased tenfold once Crash took home the golden statue. Suddenly, we weren't allowed to enjoy both---it was one or the other, while the other two Best Picture contenders remained out in the cold. Either way, Crash bested the competition in the eyes of the Academy…and like the presidential election, it's not like a recount will do any good.

Taken on its own merits, Crash is an uneven but watchable film that doesn't shy away from the bulk of the subject matter it presents. Is it manipulative? Possibly, though one could argue that all films are manipulative on some level. Is it heavy-handed? You bet. However, getting a message across our media-saturated culture all but requires a lot of shouting---so if you're of a different mindset than the one presented in Crash, you're not going to walk away happy. The first time I saw the film, it didn't live up to expectations; even so, a handful of powerful moments helped to drive the story forward. It's a bit easier to process the second time through, though one wishes the entire film could be as moving as only a handful of scenes really are.

Like Spike Lee's Do the Right Thing, Crash offers far more questions and not-so-subtle observations than concrete answers. In Lee's 1989 masterpiece, the small scope of the neighborhood worked as a symbol of the nation (world?) at large…but with Crash, it's a different story altogether. By using such a large city as the backdrop for a mind-boggling amount of "chance encounters" between the same dozen or so characters, we must exercise suspension of disbelief to overcome the broad strokes Haggis has painted with. If you're able to do this, you'll most likely enjoy what Crash has to offer. If you're not…well, you most likely won't. With that said, this film stresses raw emotion and a near-primal reaction to what's been set before us, not the logic of a sophisticated thriller.

I'll say this, though: even with its faults, Crash isn't a waste of your time, not by a long shot. The acting is generally excellent, Haggis' direction is solid and the film might just get better with age. This new director's cut, undoubtedly the main selling point of the 2-disc release in question, helps smooth a few things out but doesn't change the picture drastically. I'd explain in greater detail, but Haggis has already done so in this release's insert booklet, part of which is paraphrased below:

"You won't see earth-shattering changes; we didn't leave a lot on the editing room floor. In order to shoot this film in 35 days, we cut the script to the bone before we rolled camera, removing about a dozen pages from an already lean script. I think all those script cuts actually helped. What you will see restored here are more "moments" than scenes; chunks of dialog here and there."

"For example, I expanded the "under the bed" scene with Daniel and his daughter to its original length, did the same for the conference room scene with Graham, Flanaga and Karen, gave my Korean couple their dialog back in the hospital, reinserted a small scene with Officer Tommy Hanson that I thought illuminated his building frustration with doing the right thing, and added some dialog to his final scene in the car with Peter. Lots of little moments like that. And I let the movie "breathe" in some spots - well, a little; as I mentioned, we didn't have the money to shoot anything other than essential scenes. And I believe there is a lot to be said for shooting under such constraints."

Haggis seems genuinely grateful to Lions Gate for the opportunity to tinker with Crash a bit---and once again, the result is a slightly smoother film that is in no way inferior to the theatrical cut (though it's not a night-and-day improvement, either). One could easily argue that even the mildest alteration to the film should eliminate the awards proudly displayed on the front cover; this is, after all, a different film than was presented to theatrical audiences and the Academy. Either way, I'd imagine that most anyone who enjoyed Crash the first time around will appreciate the small additions, while those who have yet to see it won't be missing out on anything earth-shattering.

Of course, a new cut of the film often means a few other bells and whistles, and this 2-disc set shouldn't disappoint those looking for a more thorough DVD experience than that of the original one-disc release. You won't be wading through extras for hours on end, but the total package should be more than enough to please all who enjoyed the main feature. Let's look closer, shall we?

It looked great the first time around, so it's no surprise that Crash still earns high marks in the video department. Boasting a clean, clear 2.35:1 anamorphic widescreen transfer highlighted by excellent use of color, the only notable problems (occasional softness, grain, etc.) look to be source material related. It's also worth noting that the new bits of footage appear to blend seamlessly with the rest of the film, so fans of Crash shouldn't be disappointed on any level.

We get even better news in the audio department, as the excellent 5.1 Surround mix included on the original release has been paired with a new 6.1 DTS mix. Overall, Crash sounds better than ever---especially given its relatively low-budget roots---and features a convincing atmosphere, clear dialogue and immersive music. It's not exactly a night-and-day difference from the original release, but it's certainly a welcome addition that you'll appreciate. English and Spanish subtitles have been provided for the main feature only, as well as English captions for the deaf and hard of hearing. 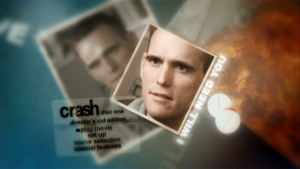 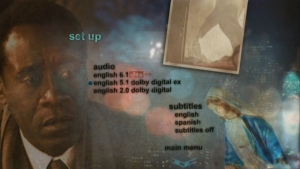 Like the original disc, the menu designs for this release are simple, attractive, and easy to navigate. This 115-minute film---only two minutes or so longer than the theatrical cut, for those keeping score at home---is still divided into 24 chapters, while no obvious layer change was detected during playback. This 2-disc release is housed in a slim double keepcase with a slipcover and insert; the cover artwork, while maintaining the style of the original release, is a rousing improvement.

Bonus Features
Since Crash has made the jump to a 2-disc edition, you'd be right in guessing there are several new goodies on board. Not all of them are new, of course: ported over from the previous release is an Audio Commentary featuring co-writer/producer/director Paul Haggis, co-writer/producer Bobby Moresco and actor/producer Don Cheadle. No matter how you felt about the movie, most open-minded viewers should find this commentary entertaining and informative, as the three participants seem to be in very good spirits. Even so, an additional commentary may have been a good idea.

Aside from a different Introduction by Paul Haggis, new to this release is "Behind the Metal and Glass: The Making of Crash", a more informative behind-the-scenes piece than the 10-minute featurette included on the original disc. Featuring plenty of participation from the cast and crew, it's not quite as engaging as the audio commentary but still makes a good partner. A trio of new featurettes are also included, including "L.A.: The Other Main Character" (a brief portrait of the sprawling city itself), "Unspoken" (a slightly ham-handed look at the film's depiction of racism) and "On Paul Haggis" (a self-promotional profile which doesn't add much to the package). 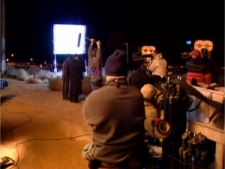 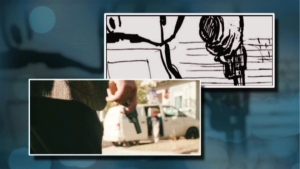 We also get a collection of eight Deleted Scenes with optional director commentary; as far as cut footage goes, it's nothing particularly special but worth checking out. Also included are a pair each of Script and Storyboard Comparisons, a Music Video for "In the Deep" by Bird York and a handful of Music Montages (NOTE: A few different script/storyboard comparisons and music montages were also present on the original Best Buy bonus discs, so you might want to hang on to those).

Gone from the original release is, of course, the previously mentioned 10-minute behind-the-scenes featurette, as well as Kansascali's "If I…" music video and a selection of trailers. While some of these extras could've dug a bit deeper, what's here should be enough to satisfy most fans of the film.

Best Picture of 2005? Well, that's another argument for another day. Even with its faults, I found Crash to be a decent film that was damaged under the weight of its own critical acclaim and award nominations. This 2-disc Director's Cut doesn't severely affect this film in either direction, though the cynic in me can't shake the feeling that this is simply a quick post-Oscar cash grab. Even so, the new supplements and technical "upgrades" help to round out the overall experience, and what's been left behind is inconsequential. Those who have yet to see the film will get more from this release, while those who own the original should consider this package a worthy upgrade. Recommended.