There has been a lot of mystique surrounding the late 70's BBC show The Omega Factor.  Hatched from an idea by producer George Gallaccio (who was associate producer on Doctor Who during part of Tom Baker's tenure), the show was an early version of the X-Files, with a newspaper reporter looking into various psychic phenomena and conspiracies while searching for the person responsible for his wife's death.  It sounds like an average TV show, but there was a lot of controversy surrounding this particular program. 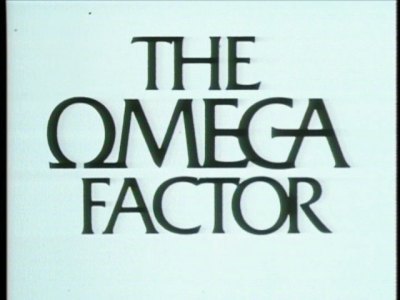 Mary Whitehouse was a right wing gadfly who saw it as her job to police the BBC's programing and protect the nation's moral standards.  As General Secretary of The National Veiwers' and Listeners' Association she would complain whenever she saw something objectionable on the TV or radio.  When she saw the fifth episode of The Omega Factor, entitled Powers of Darkness and concerning a girl whose body is taken over by a 16th century witch, she called the BBC and said that it was "one of the most disturbing programs [that she had] ever seen on television."  The BBC wasn't about to change their lineup based on one group's opinion, but the complaints from the NVLA continued to poor in and when the show's ten episode run was complete, it was quietly cancelled.  In the years since then, The Omega Factor has never been repeated.  Never broadcast late at night nor were episodes ever released on home video.  That has lead people to wonder if the show was as edgy and disturbing as Whitehouse claimed.

If you missed it during its initial run, you only had the vague recollections of others to go on.  The show quickly attainted mythic status.  An eerie precursor to the X-Files that was too intense to be shown on TV.  With scenes of people being burned alive and women attacking their lover's with knives this was a scary but well crafted show that was on the cutting edge.  Or so the rumors went.

Now all ten episodes of The Omega Factor have been released in a nice DVD set and viewers can see for themselves what is so interesting about the show.  It turns out that it's not a lot.  After watching the series I've come up with an alternate theory as to way it was cancelled: The program just isn't that good. 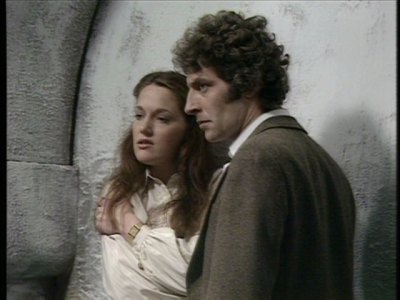 The show revolves around Tom Crane (James Hazeldine) a newspaper reporter who writes a column on psychic phenomena.  He gets a tip that a powerful psychic, the real thing, is living under an assumed name in Edinburgh.  Traveling to the north, he finds Edward Drexel (Cyril Luckham) running a book shop.  Drexel doesn't deny that he's a talented mystic but refused to give a demonstration of his powers.  When Tom suggests finding a local woman who has turned up missing, Drexel says that even Tom himself could do that, and then gives him a dire warning to leave Edinburgh.

Tom of course isn't about to be scared off a story that easily, but the following night while he's driving his car, an apparition of Drexel's daughter mysteriously appears in the middle of the road.  Swerving to miss her he hits a tree and his wife is killed.

Determined to find Drexel (who has mysteriously disappeared) Tom is recruited by 'Department 7' of the Ministry of Defense.  Teamed up with Dr. Anne Reynolds (Louise Jameson - Leela from Doctor Who) and serving under Roy Martindale (John Carlisle) who may or may not be part of the problem, Tom looks into troublesome phenomena that have no scientific explanation while honing his own latent abilities.  Add in a conspiracy where all the members where a ring with an omega on their little fingers, and you have all the elements for a good show.

The problem is that this show never really gels, and it's neither suspenseful nor startling. The stories are very slow getting started, with the plot only getting moving after the first half hour.  Even after things get rolling, the plots are never surprising of unexpected. 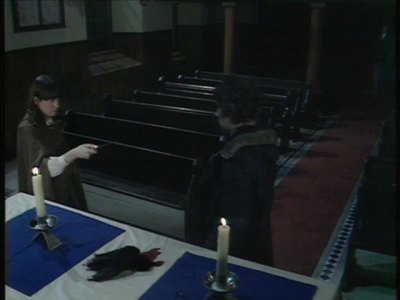 A good representative episode is the one that caused Mary Whitehouse to have a conniption,  Powers of Darkness. [Spoiler warning: I discuss the end of this episode.  If you don't want to know how it ends, skip down to here.]  This episode begins with a group of three young adults playing with a home made Ouija board.  For the first five minutes of the show, we get to see a glass move slowly around a table, pointing out the letters of the word "Effie."  Absolutely riveting.

Then there's a subplot about Tom's brother who's in the hospital and the engrossing "driving across town" scene where Tom meets Jenny, one of the people playing with the Ouija board.  After that we get to see Jenny's room mate, Gavin, attempt to hypnotize his girlfriend, only to put Jenny in a trace instead.  Jenny manages to channel the spirit of Effie, a 16th century girl who was burned as a witch.  (Or was this a previous life regression.  They imply that, but if it's true that Jenny IS Effie, they what was happening with the Ouija board at the beginning of the show?)  Poor Jenny screams as she feels the flames burning her, and across town Jenny's boyfriend, Ian, catches on fire and burns to death.  (What?  How did that happen?) Over half of the show has gone by, and we're finally discovering what it's about.

After Ian's funeral, a distraught Jenny wants to be hypnotized again so she can discover just what killed her boyfriend.  He daft friend puts her under, and this time Effie takes Jenny's body and doesn't want to give it back.  By now 2/3 of the show is over.

Effie/Jenny takes off and Gavin goes to find Tom.  They search for the girl but can't find her until Tom uses his psychic powers and sees an image of a graveyard.  They head to where Ian was buried and find the girl in a church performing an odd ceremony.  Not being able to bring her out of the trace, Roy gives Tom an injection so that he can "lead her out, from the inside."  Then we are treated to, get ready for this, two and a half minutes of interpretive dance with Tom and Jenny dressed in black jump suits pulling at each other (along with a couple of other people thrown in for good measure) while odd music plays over the scene. 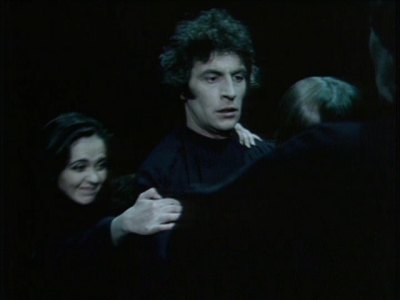 What was the suspenseful part in that show supposed to be?  When Jenny is found possessed in the church?   That wasn't intense since you know that the people who can help her have arrived.  In any case, that's right at the end of the show and we've waited way too long for anything interesting by that point.

The thing is, that is a typical episode.  It's not the best nor the worst.  This is a low key show and its slow pace fails to hold viewers interest.  Even if you're able to stay involved for the entire hour, the payoff at the end really isn't worth the effort.  This would have been a much better show if they had condensed it to half an hour.

Another problem is the production values.  This was a very low budget affair, and even the special effects on Doctor Who were much better.  They rely on superimposed images that would have looked corny in the 60's much less 1979 when this was filmed for shock value.  Not only that but the camera work looks unprofessional with people being not quite centered in the frame and faces obscured by shadows.  There are boom shadow present in a couple of places too.  It was apparently a quick shoot too, because there are a couple of places were actors stumble over their lines, but they aren't reshot.

There are some nice touches to the show, there's a good amount of continuity with certain subplots being woven through several episodes, but this isn't enough to save an otherwise poor quality show.  It's too bad, because with a bit higher technical quality and tighter scripts, this could have been a good show.

The entire ten episode run of The Omega Factor is presented on three DVDs that come in a fold out holder that comes in a slipcase.  There is a very informative 16 page booklet included with pictures from the show and an informative essay. 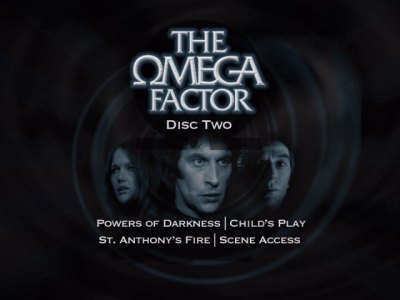 This set has a mono soundtrack that's a bit less than average for a show from 1979.  There is a slight amount of hiss in the background and the whole track is more flat than I was expecting.  It really sounds like they were using equipment that was very old.  The dialog is easy enough to hear, but there are no subtitles.

The full frame image leave a bit to be desired.  The show was recorded on video tape, even the outdoor scenes, and it hasn't aged well.  The picture itself is very fuzzy and not very distinct.  The colors aren't as bright as they should be, and the level of detail is below average.  In addition to that there are defects in the tapes, mainly video dropouts that pop up here and there.  One other odd think is that the picture is slightly window boxed, with black bars on the left and right.  I can only assume that it was filmed that way.

There are a couple of extras included with this disc, all on the third disc.  The main extra is Inside the Omega Factor a half hour look at the series.  Jack Gerson (creator/writer) and George Gallaccio (producer/director) are interviewed and they discuss the origins of the series, the casting, and the stories.  They also digress and talk about some of the eerie things that happened on the set, which I thought was a waste of time.  I was also astonished that director Eric Davidson said that he agreed with Mary Whitehouse's complaints for the most part.  I quite enjoyed this look behind the scenes of the show.

In addition to a photo gallery there's also a hidden commentary track.  It's for the episode Powers of Darkness and you can only access if from the scene selection menu on the second disc.  I can't imagine why they didn't put it in a more visible spot.  In any case Eric Davidson (director), Anthony Read (writer) and George Gallaccio (producer) are interviewed by Marcus Hearn (who wrote the booklet that accompanies the set) discuss the episode and the controversy surrounding it.  I was disappointed that they talk a good deal about psychic phenomena and the paranormal.  Hearn steers the conversation in that direction a few time, even asking if the Ouija board worked on it's own when the actors were filming that section.  One of the commentators said that he believed that it did, and the writer even admits that he believes in telepathy.  I just rolled my eyes at that part.

This is a show that has been talked about for years.  Since it was a SF/horror show that has never been shown aside from its original run, genre enthusiasts have become very interested in this program stuck in limbo.  It's too bad that the series itself isn't as interesting or suspenseful as people have remembered it.  I was very excited to see it, having heard about the show a couple of times in the past, but it turned out to be rather listless and dull.  Since it's has such a mystique about it, the show is worth renting, but it would make a really bad blind purchase.