Squid and the Whale: Special Edition, The 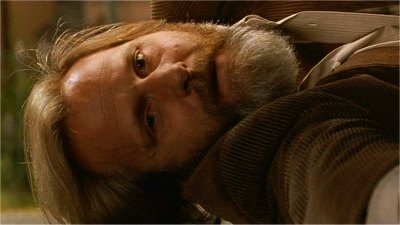 I've convinced myself over the years that there are, at the very least, two branches of intelligence. One pertains to those with a natural desire to learn and a knack for comprehension. The latter pertains to common sense: specifically, knowing how to figure out what to do when life throws those unexpected punches our way. This isn't to say that people can't balance the two---after all, we've all met people who seem to "have it all together"---but a larger percentage of folks are weighted one way or the other, aren't they?

At the heart of The Squid and the Whale (2005), director Noah Baumbach's fourth film, lies a handful of characters weighted towards the former. Parents Bernard (Jeff Daniels) and Joan (Laura Linney) are nearing the emotional end of their 17-year marriage, much to the dismay of sons Walt (Jesse Eisenberg) and Frank (Owen Kline). The joint custody agreement sees both sons alternate between parents on a near-daily basis. Naturally, both sons have split emotions: the older Walt admires his father's opinions on literature and film, while Frank prefers the attention of his slightly less distant mother.

The reasons for Bernard and Joan's separation are apparent from the very beginning of the film, though the exact details are only hinted at. In any case, that's really not the focus of the story; instead, The Squid and the Whale takes a peek at what happens because of the separation. The parents are well-read but not always well-spoken, regularly enforcing their own passive-aggressive behavior on the boys themselves. We see their negative influence in other areas as well, from Walt's aborted relationship with his girlfriend (because "he was looking for something better") to Frank's…well, should I start with the public masturbation habit or his drinking problem? 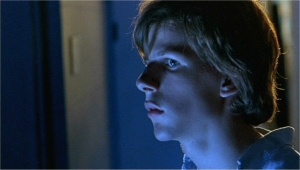 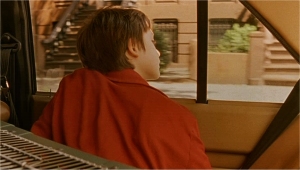 It's no secret that The Squid and the Whale is strikingly honest---almost too honest, actually---in a way that few American films are. Baumbach holds little back during the film's brisk 81-minute running time, making it almost as disjointed and unsettling as Bernard and Joan's relationship. Thankfully, the dry humor of the script helps the balancing act, creating a finished product eerily similar to a Wes Anderson film (in fact, he's one of the producers), yet like nothing you've seen before. The winning performances by Daniels, Linney, Eisenberg and Kline anchor the film, ensuring their characters are fleshed-out and believable…even though not exactly model citizens. More than anything, it's the characters' constant interaction with one another that adds the most layers of interest, creating a convincing family unit that just so happens to be falling apart at the seams.

If The Squid and the Whale has any real faults, they're in very close quarters with its strengths. It's an extremely blunt film, filled to the brim with all kinds of stuff that kids aren't allowed to see at the theater, ironically enough, without a parent. That's not a fault on principle, of course, yet The Squid and the Whale may have been a bit more effective if certain things were simply implied instead of actually shown. Additionally, the short running time (which includes the end credits) doesn't allow quite enough time for the film to really feel complete. The quick editing and unusually high number of short scenes---some of which are limited to a sentence or two---may frustrate viewers looking for a meatier exploration of certain story elements.

In the end, though, it's the honesty of The Squid and the Whale that makes it worth watching and the characters that make it worth watching again. The DVD from Sony Pictures is a serviceable effort, combining a decent technical presentation with a handful of interesting bonus features. It may not be a package for all audiences, but those who can roll with the film's punches should walk away happy. Let's take a closer look, shall we?

The Squid and the Whale isn't a visually stunning production, but this 1.82:1 anamorphic widescreen transfer seems to offer a faithful presentation of the limited source material. The subdued color palette looks accurate, if not a bit dull; grain is kept to a minimum, though it fits the film's down-to-earth visual style and 16mm roots. Edge enhancement and haloing popped up during a number of scenes, but not enough to seriously mar the image. Overall, this is a moderately pleasing transfer that shouldn't disappoint fans of the film.

The audio presentation is also basic but effective, featuring an English Dolby Digital 5.1 mix that gets the job done nicely. This is a dialogue-driven film, of course, so don't expect a great deal of surround activity or LFE action and you'll be happy. English and French subtitles, as well as a French 2.0 mix, are offered during the main feature only. 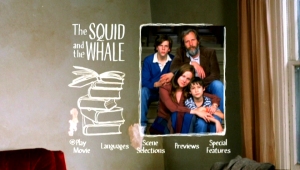 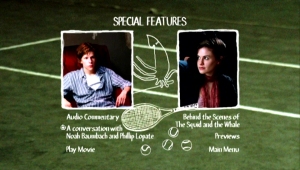 Seen above, the menu designs offer a clean layout and easy navigation. This 81-minute film has been divided into 12 chapters, while no layer change was detected during playback. This one-disc release is housed in a standard keepcase, featuring attractive cover artwork and an insert booklet with a pair of reviews by David Denby (The New Yorker) and Kenneth Turan (The L.A. Times).

Bonus Features
Though this Special Edition of The Squid and the Whale looks thin on paper, the bonus features included here are all appropriate and worthwhile. First up is an Audio Commentary with director Noel Baumbach; instead of the typical talk-over track, though, Baumbach shares his thoughts about the film while 53 minutes' worth of production stills float by. Divided into a generous 35 chapters and indexed for your convenience, this unorthodox commentary features plenty of personal anecdotes and production tidbits. Casual fans of the film may grow weary after 20 minutes or so, but there's plenty there if you're patient enough. Also on board is a short Behind-the-Scenes Featurette (9:56) and a more in-depth Conversation with Noah Baumbach and Phillip Lopate (37:38); the latter is a Q&A session from the New York Film Festival and features an additional layer of personal insight. Closing things out is a generous selection of Trailers for recent and upcoming Sony DVD releases.
Final Thoughts

This is an unconventional story told with biting style and raw honesty, so it's great to know that Sony's DVD treatment does justice to one of 2005's most overlooked films. The Squid and the Whale is sharp, blunt and doesn't waste time---and even though it feels a bit incomplete, those looking for something a little different could certainly do a lot worse. Any fan of Noah Baumbach's earlier films (or, of course, the bulk of Wes Anderson's output) should find much to appreciate, if not outright admire. Though the limited source material warrants a mild handicap in the technical department, at least the bonus features give fans something to chew on after the main course. Overall, The Squid and the Whale is worth looking out for and comes firmly Recommended.

Randy Miller III is an affable office monkey based firmly in Harrisburg, PA. He also does freelance graphic design projects and works in a local gallery. He also enjoys slacking off, general debauchery, and writing things in third person.