Respect to Seijun Suzuki. At the age of 73, after directing fifty-five motion pictures, he could have easily coasted on his reputation and made another of his trademark crime films. Instead, he chose to make Tanuki-Goten (Princess Raccoon), a gonzo musical that attempts to marry traditional Japanese theatre with modern digital effects, rock 'n' roll, and even a little hip-hop. By all accounts, the legendary director has lost none of the fierce independence and contrariness that got him fired from Japan's Nikkatsu Studios in 1967, securing his cult status for generations.

Unfortunately, when you dare to leap so high, you sometimes fall short. 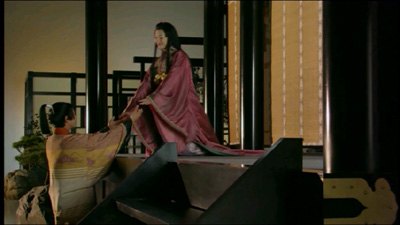 Tanuki-Goten is the story of two star-crossed lovers. A little bit of Romeo & Juliet, a little bit Brothers Grimm, the film starts in a mystical castle where the aging landlord, Azuchi Momoyama (Mikijiro Hira), is informed by his equivalent of a magic mirror that he is no longer the fairest of them all. His son, Prince Amechiyo (Jô Odagiri), has surpassed him as the handsomest man alive, and so dear ol' Dad devises a plan to banish the Prince to the faraway Sacred Mountain, a place that no one ever returns from where it so happens the King sent Amechiyo's mother years before. To get to the Mountain, Amechiyo's abductor must take him through the Raccoon Forest. They are set upon by tricksters from the Raccoon Castle, and Amechiyo is rescued by Princess Raccoon (Ziyi Zhang). It is, of course, love at first sight.

Except, as we are repeatedly reminded, raccoons and humans are not supposed to fall in love. So, not only is Amechiyo on the run from his own father, he must also find his way around ancient custom. The whacky journey before him will include death, magic frogs, and moments of plot convolution that are as difficult to describe as they are to understand. Suzuki has always been known to jump from point A to point D in his plots, and that tendency has not left him. While it was an exhilarating quirk in his best work, in Tanuki-Goten, it just makes an already troubled film more difficult.

Which isn't to say Tanuki-Goten is entirely bad. Some of it is a lot of fun, including an amusing subplot where Amechiyo's kidnapper is mistaken for a raccoon and held captive by a family of peasants who are waiting for him to turn back into his animal form so they can make soup out of him. One would also find it hard not to laugh at the golden frog's squeaky voice.

The musical numbers are also delightful, if only to see what Suzuki is going to come up with next. No style is off limits as we careen from sappy ballad to traditional operetta to T.Rex-style glam. The singing and dancing is matched by a no-holds-barred visual style. A handful of scenes are shot on location, including Amechiyo's abduction from a beautiful field of flowers. Most of the film takes place on highly stylized sets that are probably what Dogville would have looked like had it been directed by Baz Lurhmann. They are sparse and superficial, but brightly colored, playing up the sense that we are watching something staged. For some sequences, sets are dropped completely, and Zhang and Odagiri perform in front of a rudimentary green screen with only the most primitive of digital effects to back them up. In fact, there is little attempt to integrate any of the special effects into the "reality" of the picture; just like the hand-made sets, they exist to remind us that this is all performance, never letting us forget the roots it has in Kabuki and other forms of traditional theatre. There are three exceptions to this: the detailed animation under the opening credits, the animated Sacred Mountain, and portions of the battle between the Princess' retainer and Momoyama's psychic advisor, the Old Maid Virgin. In those cases, I think Suzuki intended to awe us, presenting a contrast to the less flashy sequences, and it works. The interior of Momoyama's castle is also quite inventive, with a map of the world serving as his floor, and people of various countries and backgrounds making up his court. They lounge about on the map--presumably over their native land--speaking in their national tongue.

Too bad the story cannot live up the visual thrills. The screenplay, also by Suzuki, alternately confuses and drags. A lot of the scenes could have been tightened up, and a few cut for redundancy. At times, the actors seem as lost as the audience. While everyone is game for whatever comes their way, there is a sense of shellshock from never knowing what will come next. (Zhang also has the added problem of singing in Japanese, a language she does not speak; her dialogue was delivered in Chinese.) By the time we do reach the climax, it comes a little too late and goes on about ten minutes too long. 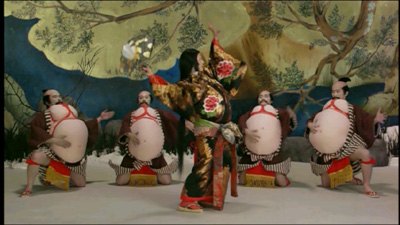 Video:
Tanuki-Goten is given a 16:9 anamorphic widescreen presentation. The colors are vibrant, which is absolutely essential given that the look of this film is its main draw. On occasion, the picture looks a little fuzzy, but it's hard to tell whether it's a problem of the transfer or just a byproduct of Suzuki's crude effects

Sound:
Viewers can choose between a Dolby 5.1 or DTS sound mix of the original Japanese language track. I have no complaints here. There isn't much by way of complicated sound effects. Even the musical performances are pretty straightforward.

There are three subtitle options: Traditional Chinese, Simplified Chinese, and English. The translators did a less than stellar job on the English version. Words are often dropped, and there are tense and structure issues throughout. It never gets so bad as to obscure the meaning of the dialogue (though, once when Princess Raccoon cries for "Mercy!" and the subtitle is "Merci!" I did stop to wonder why she had started speaking French), but the awkward language didn't help me stay with the flick when I was losing interest in the story.

Extras:
The DVD includes a handful of trailers, a section labeled "Interviews," and a section called "Databank." The latter contains merely the same cast and crew credits that are on the front cover of the DVD and a synopsis of the plot that turns out to be the back cover copy--so not really much of an extra at all. Given that these text sections are presented in English, it's disappointing to discover that the interviews do not have subtitles--even more so when I realized that this is really a 46-minute feature containing not just cast and crew interviews, but plenty of behind-the-scenes footage. The trailers don't have subtitles either, and they are all presented back-to-back as one feature without explanation of what each one is. Some of them display the kind of zip I wish Suzuki had brought to the film itself. 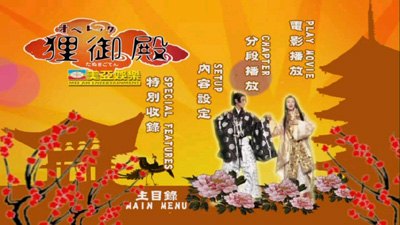 FINAL THOUGHTS:
As a fan of Seijun Suzuki, I wanted to like Tanuki-Goten much more than I did. In the end, I don't feel it's an awful movie, but rather a case of the ambition of the filmmaker not quite translating to the screen. Still, it is a gorgeous visual treat and worth checking out on that merit alone. So, while I would like to give Tanuki-Goten a full recommendation, the more honest reaction is to suggest you Rent It first, and only then see if you need to have it as part of your Suzuki library.