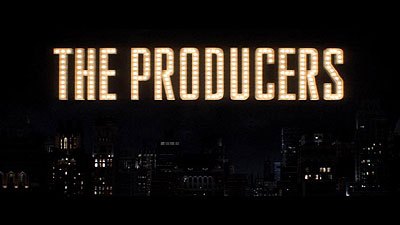 
The Movie
When Mel Brooks graced the world with his first work as an auteur, The Producers, he didn't exactly set the world on fire, as his greatest works were still ahead of him. Starring Zero Mostel and Gene Wilder, the film grew on audiences with time, and now is viewed as a comedic gem, and is the source for one of best-regarded Broadway musicals of all-time.

Considering the incredible success of Brooks' stage adaptation of the film, it was no surprise that another trip to the screen was attempted, bringing the show's stars, Nathan Lane and Matthew Broderick, along for the ride. Now, there's a movie musical based on a stage musical that's based on a movie about a stage musical. Something was lost in the many translations, though a bit was gained as well.

For those unfamiliar with the story, Max Bialystock (Lane) is a low-budget musical producer, who funds his failures with checks collected by romancing little old ladies. His schemes grow grander when he meets accountant Leo Bloom (Broderick), who pays a visit to check out Bialystock's books on behalf of his firm. Noting that a bad play doesn't have to pay out on investments, Bloom gives the producer the idea to collect a large amount to put on an awful musical that will close instantaneously, leaving him with a large profit. The only thing he needs is the perfect awful idea. 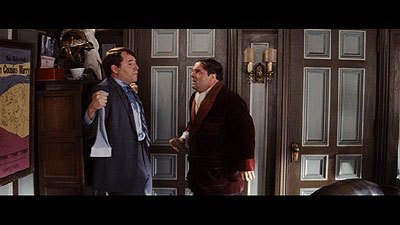 Providing that idea is Franz Liebkind (Ferrell), a Nazi sympathizer who has written a pro-Fuhrer musical titled "Springtime for Hitler." The helmeted loon gives Bialystock and Bloom the perfect way to offend an audience, and make their plan work. But, as this is a Mel Brooks movie, things don't go as planned, including the casting, the choice of crew and the production itself. As a result, Bialystock ends up worse off than he was before he met Bloom.

The film follows relatively closely to the original in terms of the plot (dropping some of the more dated ideas, i.e. L.S.D.), with much of the dialogue carried over, but the many musical numbers are near direct ports of the stage show. Comparing Mostel and Wilder to Lane and Broderick is not easy, but Lane is a more nuanced bastard than Mostel, and Wilder plays the overwhelmed Bloom closer to the edge and with more realism. Together, the chemistry beween the new producers is a bit stronger. Ferrell's Liebkind plays close to the original role, though he tones down the anger and bumps up the silliness.

There are at least two places where the stage/new film improves on the original. First is the character of the Swedish receptionist Ulla (Uma Thurman), who us more interesting here, thanks to her audition song and more involved personality. It doesn't hurt that Thurman seems to be having a lot of fun with the part, playing against type as a blonde bombshell. The other improvement is the production numbers, especially the ridiculous "Keep it Gay" with director Roger Debris. While they nearly doubled the length of the movie, they make several scenes funnier or just more enjoyable.

Helmed by stage director and first-time feature director Susan Stroman, this version is a bit of a throwback to an older generation of studio musicals, shot in a very straightforward manner, unlike films like Rent or Moulin Rouge. The result is a very artificial feel, but one that works with the story to achieve a very specific sense of time and place. It's in this unusual world that over-the-top characters like Liebkind, Ulla and Roger's gang can live and breathe. It's also a world that will prevent many viewers from enjoying it at all, as they can't handle people breaking into song for no reason. 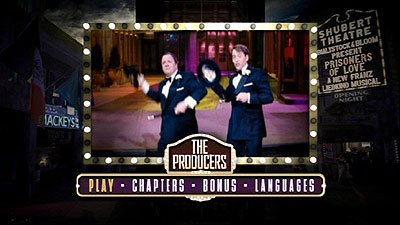 The DVD
Delivered on one DVD in a standard black keepcase, the film has an animated, anamorphic widescreen main menu, with options to watch the film, select scenes, watch bonus features and adjust languages. The chapter menus include still previews and titles for each scene, while language options include English and French 5.1 tracks and English (SDH), French and Spanish subtitles. There is no closed captioning.

The Quality
A very wide 2.40:1 anamorphic transfer makes for a good looking film, with crisp color, solid detail and not a spot of dirt or damage. Jagged edges can be seen in certain spots, but not frequently. Some shots are softer than others, but it seems like a function of the source materials.

The audio is quite nice, with excellent clarity and power, but it doesn't have the surround sound one might expect from a musical. Some music enhancement is heard in the side and rear speakers, but nothing close to what you might expect.

The Extras
The bonus features start with a selection of eight deleted scenes, almost 20 minutes in all, presented in anamorphic widescreen with a play-all option. For the most part, these are more correctly labeled as alternate cuts, and I can't say they would have added much to the film.

The deleted scenes are followed by over 15 minutes of outtakes, which are very funny and should be the first thing viewed following the film. Equally interesting but much different is "Analysis of a Scene:'I Wanna Be a Producer'" which shows how the number came together. Interviews with Brooks and Stroman and plenty of rehearsal/on-set footage make up a quality 16-minute inside-look.

Listed last, but the largest in content, the final extra is a feature-length audio commentary by director Susan Stroman. This is one of the more unusual commentaries I've heard, as Stroman is extremely informative, but sounds like she is readings from extensive...EXTENSIVE notes. While the effort to provide a detailed commentary is certainly appreciated, it's an odd piece to listen to, and probably made more sense as a trivia track. The lack of spontaneity hurts it a bit. 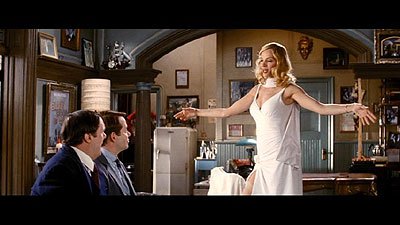 The Bottom Line
The two films shouldn't be considered as connected, as they couldn't be more different. Comparing a film musical to a comedy is a waste of effort in most every case, so the best way to approach this movie is to examine your opinion of other musicals, because otherwise you'll likely have a good time with this film. The presentation is nice, and the extras add to the overall package, making for a worthwhile pick-up for Brooks fans and musical fans.