Someone is meticulously taping the Laurent family - Georges (Daniel Auteuil) and Anne (Juliette Binoche) are visibly upset about it. The tapes, usually placed in a plastic bag in front of their house, would show how they leave for work and then come back home over and over again. Concerned about his family's privacy Georges informs the police but is quickly told that as no law has been broken it is probably a hoax. Georges must wait and see what happens.

But the tapes keep pilling up! Someone is now taping Georges's old house, the one he used to share with his parents, deep into the French countryside. Determined to put an end to the harassment and subdue Anne's fears Georges will embark on a journey with plenty of unknowns.

A spectacular thriller evoking comparisons with the work of the great Alfred Hitchcock Cache a.k.a Hidden (2005) has finally arrived to North America amidst a sea of excellent reviews coming in from all over the world. Directed by Austrian director Michael Haneke (Funny Games) whose films always seem to be testing the tolerance of its viewers Cache is without a doubt as provocative as it is demanding. Cold, raw, and stripped of any excessive glamour Cache gets under your skin consistently asking questions that seem impossible to answer. 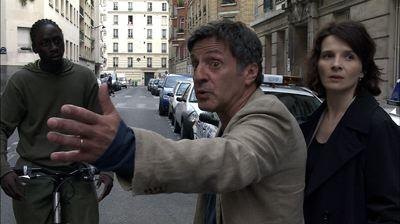 Similar to Michael Haneke's Code inconnu…a.k.a Code Unknown (2000) about the manner in which people communicate when placed in extraordinary situations Cache relies on an extremely complicated plot where numerous smaller fragments comprise the bigger story. The plot however, at least as far as conventional cinema is concerned, is anything but crucial here – what matters is the reactions which the main protagonists reveal when faced with adversity.

As the title suggests Cache is also a film about the subconscious, the dark secrets we all carry in our hearts, the terrifying hidden deep into the far corners of our souls. The film successfully steps into a territory where the more one attempts to apply logic to what is shown on the screen the more one becomes entangled in a web of illusions (the more we learn about Georges, a man we thought we knew, the more it becomes obvious that he is a stranger).

Some have suggested that Michael Haneke has intentionally left plenty of clues throughout Cache revealing its mystery, explaining the chronology of events. If such were indeed present then I most definitely missed them. I saw Cache as a film which explores the process of "explaining" what the visuals suggest, the formula one uses when one attempts to apply logic to events that seem incoherent. Certainly that is why the film provides an open ending suggesting that there are plenty of opportunities for the viewer to "explain" the mystery behind the tapes Georges and Anna are given. 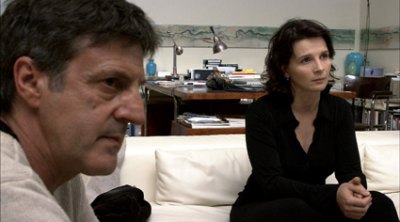 There is no doubt in me that after seeing Cache some will walk away puzzled, there will be plenty of questions that will remain unanswered. Was there a string of events which I misinterpreted, was there a clue I did not see, was there a skewed logic I did not detect? No doubt the more you ask yourself what it was that Michael Haneke kept for himself the more you will agree that his story is practically brilliant.

Presented in its original aspect ratio of 1.75:1 and enhanced for widescreen TV's Cache looks stunning! Shot on locations in Paris and Vienna with HDW-750P HDCAM camcorders the film offers a degree of detail which is by all means staggering: contrast is flawless, colors are piercing and lush, and I could not detect even a tiny bit of edge enhancement on the print provided by Sony. Quite frankly at times the image becomes too good – it is so sharp and absorbing that one might find it rather artificial. I could hardly spot any artifacts either, no doubt the presentation is perfect!!

Cache is presented with its original French Dolby 5.0 track and the audio treatment is flawless! As this is an entirely dialog-driven film (in a typical for Haneke manner there is not a single bit of music here) it becomes crucial that we have a perfect sound quality and Sony does not disappoint – even the tiniest whisper is easily detectable! If there is anything that I am upset about it is most certainly the fact that once again Sony have chosen to apply rather large, yellow subtitles which I find quite distracting. Is it really that difficult to use the same (normal) font and white color for the subtitles European companies favor?

As expected the R1 version gets only two extras from the massive double French set (sadly not an English-friendly one) and unlike what the back cover of the Sony release states (it is announced that the disc contains a "Documentary on Director Michael Haneke") what we have here is exactly the same interview by Serge Toubiana (26min) that could be found on the French 3DVD set released earlier this year as well as the British R2 release by Artificial Eye. In it Haneke explains what Cache attempts to reveal placing heavy emphasis on morality as the focal point in this film. Next, we have precisely the same "Making of" that could be found on the UK disc which practically shows scattered fragments from the composition of Cache. By all means this is a rather generic piece of supplemental material and clearly not as informative and revealing as the interview with the Austrian director described above. Last but not least we have a gallery of trailers for other Sony releases and sadly I must report that the trailer for Cache is not included here. To sum it all up what you are missing from the Artificial Eye disc is the "Filmographies" (which is hardly of crucial importance as far as I am concerned) and the theatrical trailer for Cache.

Cache was my top pick last year, the one film that clearly stood above everything else I saw - Unconventional, intelligent, and highly-provocative work that clearly solidifies Michael Haneke's status as the most innovative film director in contemporary world-cinema. Spectacular film!! DVDTALK Collectors Series!