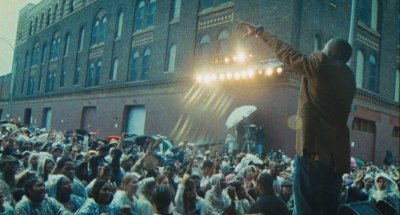 Fans of comedian Dave Chappelle should already be familiar with his quick rise to stardom and what happened because of it…but here's a quick recap anyway. After his sketch comedy phenomenon Chappelle's Show pulled in extremely high ratings (and record-breaking DVD sales), the successful young comedian turned down a whopping $50 million contract from Comedy Central and left the show. Some say this was simply because success came too quickly for the down-to-earth comedian; others say that Comedy Central demanded too much creative control over the series. In truth, it was probably a bit of both.

Block Party captures Chappelle at the popular peak of his career thus far: in September 2004, just after the proposed $50M contract but before his departure from the series. He's obviously in very high spirits, as this "concert film", for lack of a better term, paints Chappelle as a charismatic host with good will (and money) to burn. His plans are to organize a block party in the Bed-Stuy area of Brooklyn, NY, inviting friends and strangers along for the ride. He even gives away a fistful of all-expenses-paid "Golden Tickets" à la Willy Wonka in his hometown of Yellow Springs, Ohio. Parole officers, store clerks, random passers-by, a marching band---usually, whoever happened to be in the right place at the right time.

The hometown, concert, and preparation footage is all brought together skillfully by director Michel Gondry (Eternal Sunshine of the Spotless Mind) as we bounce around with energy to spare. The "all access" nature of the film is perhaps its biggest highlight, best evident during the musical performances sprinkled throughout. Chappelle made sure some of his favorite artists would be on hand to perform, including Kanye West (at top), Mos Def, The Roots, Common, Jill Scott and many more. Somehow, he even got The Fugees to get back together. One time! 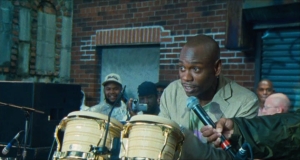 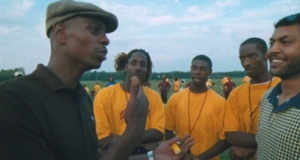 The other main highlight of this "concert film" is that it's not all about the music. In more ways than one, Block Party is a commercial-free celebration of community and simply having fun…but to the film's credit, it still takes itself seriously without becoming too overbearing. We even get a tour of the surrounding area, visiting the daycare center where late rapper The Notorious B.I.G. was raised; as well as the strange "Broken Angel" building, whose owners are perhaps equally odd. Small touches like these help elevate Block Party from simple concert documentary to something much more meaningful. Any way you look at it, it's an entertaining show...no matter your musical preference.

Universal's DVD doesn't exactly pull out all the stops, but with a main feature this strong it really doesn't need to. The studio has once again made the curious decision of releasing the original theatrical version in pan-and-scan only, but most will opt for this "unrated" cut anyway: also featuring a few extended musical performances, it's a small but mighty DVD package that fans will enjoy. Let's take a closer look, shall we?

Recorded on-the-fly and with a much lower budget than your average concert documentary, Block Party is slightly under par in the visual department but still looks decent in most areas. Presented in its original 1.85:1 aspect ratio and enhanced for widescreen setups, much of the footage on display is a bit dull and lacks punch. Nighttime scenes aren't any better, evidenced by mild pixellation, slight artifacts and moderately weaker colors. Either way, this isn't really a visually-driven film…so the less-than-perfect picture isn't always bothersome.

The Dolby Digital 5.1 Surround mix is a bit stronger overall, boasting fine clarity and a lively atmosphere (though some of the stage banter, as with most concert films, is a bit hard to understand). The music is obviously the biggest standout here---it really adds to the excitement of Block Party, creating an authentic "you are there" feeling from start to finish. English, Spanish and French captions and subtitles are available during the main feature only. 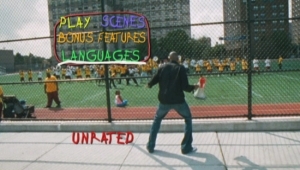 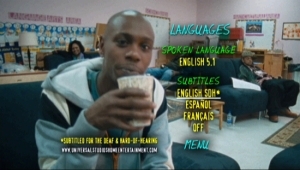 The basic animated menus (seen above, presented in 1:78:1 anamorphic widescreen) feature a simple layout and trouble-free navigation. This 109-minute film has been divided into 26 chapters, while no layer change was detected during playback. The final packaging was not included with this screener copy. Bummer.

Bonus Features
The extras are surprisingly slim but still interesting, especially September in Brooklyn: The Making of Block Party (28:09), a fairly in-depth documentary focusing on the planning and pre-production of the barty. In more ways than one, this feels like part of the actual film: presented in the same loose, casual style as the finished product, it's simply fun to watch. Next up is Ohio Players (18:41), a collection of hometown footage featuring Chappelle in good spirits. It was especially nice to see the lucky few who won tickets actually make it to the concert and meet the performers.

The last bonus feature is an option to watch the film with Extended Musical Performances, adding roughly 6 minutes to the total running time. There's nothing to get terribly excited about, but fans of the artists should appreciate the added "face time". It was good to see a few interesting extras on board here, but a commentary with some of the cast and crew (or even more deleted scenes) would have been especially nice to have.

Fun, casual and extremely entertaining, Dave Chappelle's Block Party is a fine example of a concert film with heart to spare. Even if you're not a huge fan of the featured artists (or even if you've never heard of them), it's hard not to get behind the infectious energy of the crowd---not to mention the Ohio footage and pre-concert festivities. Universal's DVD presentation isn't bad, but it could've used some fine tuning: the visual presentation is slightly uneven (possibly due to the source material), while the extras could've been more plentiful. Overall, though, this is a terrific package for music fans and anyone who likes a good party…and, honestly, who doesn't? Highly Recommended.