Strangers with Candy: The Complete Series


The Story So Far...
The story of ex-con Jerri Blank and her return to high school was told in 30 over-the-top episodes shown over three seasons on Comedy Central. The show earned a solid cult-hit status for the way it turned the after-school special on its ear. Three DVD sets were released, one for each season, between June of 2003 and September of 2004. DVDTalk has reviews of each set here: Season One | Season Two | Season Three

The Show
Jerri Blank (Amy Sedaris) dropped out of Flatpoint High and entered a life of drugs and crime, going from the street to jail, again and again, until she finally learned her lesson. Looking to get back on the straight and narrow, the 47-year-old returned to Flatpoint High as a freshman, where she found that life hasn't changed much. She still has trouble with her family, made up of a comatose father, a bitchy step-mother and a potentially sexually-confused brother, and isn't popular at school, where her only friends are the innocent Tammi and Fillipino Orlando, whom she abuses constantly. The show follows her daily struggle to fit in and be happy, as well as her attempts to seduce everyone she encounters.

Telling these stories in a ridiculously over-the-top way, marked by melodramatic music and stereotypical storylines, the show parodies the after-school special genre, tackling topics like sex, drugs and individuality. The end result is a perfect skewering of the uplifting, enlightening stories that are sold to young people as modern-day morals. Using Jerri's life experiences as a prism through which to examine the high-school experience was genius, as only someone as depraved as she is could provide a proper improper role model for the youth of Flatpoint High. 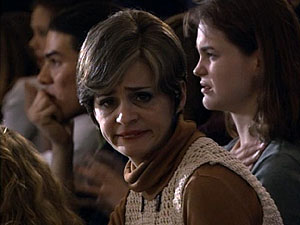 The show's greatest strength is definitely its willingness to try anything, mixing silly, nonsensical dialogue with physical comedy and surreal straight-laced acting (ala "Police Squad"), to create a high school that's bizarre, yet remarkably real in its injustices, and which hit the mark every time. A big reason the show worked is the cast, led by Sedaris, Stephen Colbert ("The Colbert Report") and Paul Dinello. Colbert set the tone, with his trademark acting style, which is serious, yet silly, and the rest of the cast, especially Greg Hollimon, who is terrific as the school's leader, Principal Blackman, followed his cues. Sedaris didn't have to restrain herself to being real, instead going to the hilarious extreme as an ex-junkie whore.

The show's best episodes play with the "learning a lesson" concept. The importance of responsibility is driven home when Jerri hurts people as the advice columnist on the school newspaper ("Ask Jerri"), while acceptance of different people is taught when she is blackmailed into finding out if a classmate is retarded ("Who Wants Cake?") The value of the disabled gets twisted as Jerri hits on a blind boy in "Behind Blank Eyes," just as racism is explored in "Let Freedom Ring" and cheating is lampooned in "Steroid Relay." The run is so strong that you could pick just about any episode at random and hit a very good show, though the final episode, "Popularity," is the ultimate example of the series' greatness, with a plot that mirrors the show's status at the time and excellent use of guest stars like Winona Ryder and Paul Rudd.

Among the episodes included on this set, two are presented as Director's Cuts, "Trail of Tears" and "Is My Daddy Crazy?" These longer cuts don't add much to the episodes, bringing in a minute or two of excised footage. These episodes were very strong in their original cuts, and didn't really need any changes. "Trail of Tears" actually suffers a bit from the additions, which make the less interesting sections of the story longer than necessary. If any episode could have used some added footage, it would be the last one, which leaves you wanting more. 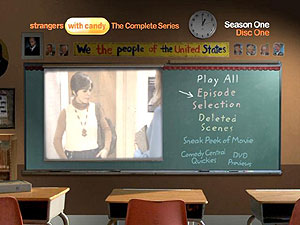 The DVDs
The 30 episodes are spread over six DVDs, which arrive in one of the nicer package concepts I've seen recently. The concept is great, as it takes the Trapper Keeper look of the "After School Specials" DVDs, and really runs with it. Whereas the previous sets used the nostalgic design simply as a slipcase for a standard keepcase, this set is actually built like a cardboard Trapper Keeper, complete with folders and a velcro closure. The two discs for each season are on hubs in their own folder, which includes appropriately styled episode synopses and info about the extras. Though the packaging is somewhat flimsy due to the construction, and the tray-less hubs put the set at risk of floaters, the creativity behind the design gets an A+.

The discs feature animated full-frame main menus with a nicely-executed classroom design that changes from the first disc to the second disc of each season. Play-all options, episode selection menus and extras are among the available options. There are no language options and no subtitles, but the episodes do have closed captioning.

The Quality
There's no telling difference between the original discs and this release, as the episodes are pretty solid overall. The color is on-target and the level of detail is good, but some very obvious pixilation can be seen during the animated segments, along hard edges and between high-contrast areas, and haloing is seen in several spots. Some episodes suffer from a bit of dullness, but none look as bad as the director's cuts, which are often a mess of digital artifacts. Besides those two low-points, the shows are usually better-looking than they were on television.

The audio, a center-channel focused Dolby Digital 2.0 presentation, is good; as good as a basic-cable sitcom from the late '90s can get. The music and dialogue are well mixed, allowing each to have their moments. The dialogue and sound effects are nicely reproduced, making for a enjoyable experience.

The Extras
The extras found on the first releases are found here as well, in addition to a bunch of new bonus features.

Disc One
15 minutes of deleted scenes gets the party started, a new extra only in this set. They are shown out of context, but are still very funny, with some fun Guy Blank and Mr. Noblet moments. Also new is a trailer for the upcoming prequel film Strangers with Candy. The trailer looks decent, but doesn't seem to have the same feel as the show. Carried over from the first set are four episode-length audio commentaries with Sedaris, Colbert and Dinello, on "Old Habits, New Beginnings," "A Burden's Burden," "Dreams on the Rocks" and "Bogie Nights." These are the kind of tracks you get when a few friends get together and chat about a project they were heavily involved in. In other words, they are a good listen.

As usual for a Comedy Central release, this disc has three "Quickies," including the legendary "Truthiness" segment from "The Colbert Report," and some DVD previews.

Disc Two
Brought back from the first release is the series' unaired pilot, which is very different from the final series. Jerri does more direct address, her mom is a different actress and Colbert and Dinello do double duty as hospital orderlies, among other changes. The evolution of the series from this first attempt is impressive, as the show takes a giant leap forward from this pilot, moving closer toward the after school special parody it became.

New to this set is "The Trip Back," a PSA from an unspecified time frame (probably the '70s). Focusing on a talk delivered by a woman whose story sounds very similar to Jerri Blank's (and looks like her), the PSA was likely the inspiration for the character (especially since one of the episodes is named "The Trip Back.") Unfortunately, the 27-minute short film is delivered without any context. Even a short intro would have helped.

Disc Three
The four episode-length audio commentaries from the first release are still here, on "Behind Blank Eyes," "The Goodbye Guy," "The Blank Page" and "Hit and Run." These are very good tracks, with plenty of info for fans to soak in. New to this collection are a set of four "Interviews from the Set," with Jerri Blank, Principal Blackman, Mr. Noblet and Mr. Jellineck and artist Ward Sutton (the designer of the opening titles.) The first three are in-character chats, but unfortunately, outside of Colbert and Dinello, their improv skills aren't too hot, and they aren't helped by a formulaic and low-key interviewer. They run about 12 minutes in total, and can only be watched individually.

Disc Four
Nothing new here, as the only extra is the 44-minute roundtable at the Museum of Television & Radio, which was on the second-season set. Featuring Sedaris, Dinello, Colbert, Hollimon and producer Kent Alterman, the sit-down is very informal and entertaining, focusing on the show's production and talking about the on-set experience.

Disc Five
A pair of new features are found here, starting with "A Message from Bob Whitely," who was in "Trail of Tears." Whitely (Will Ferrell) talks about his camp's housing, and the casino hall for a few minutes, but it's not his best moment in front of the camera. "Mr. Noblet & Mr. Jellineck Present Their Research Trip Scrapbook" is a bit longer and funnier, as the ambiguously gay duo walk you through their photo album of their recent "research trip." It's an amusing featurette, though it's a bit slow in spots.

Disc Six
A "new" commentary is included for the show's final episode. New is in quotes, as there's no proof that this wasn't recorded at the same time as the earlier tracks, but it wasn't included on the original set. Once again, Colbert, Dinello and Sedaris provide a fun commentary, with lots of information about how the episode was made.

The final disc also features the bonuses offered in the third season DVDs, including a compilation of dance scenes, a lengthy 25-minute blooper reel, and a storyboard comparison for the show's opening titles. The dance scenes, which ended the episodes, are a lot of fun, as the actors get to let loose, while the blooper reel is full of the kind of silliness that marks the best of the genre. The storyboard piece is interesting for a single watch, but I can't see this one being studied. 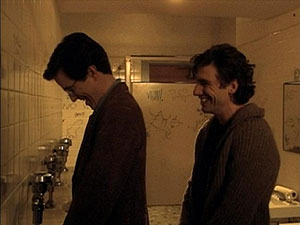 The Bottom Line
This dark comedic series is consistently funny and entertaining, with fantastic acting from the talented cast, a surreal sense of humor and absolutely no filters. If that's your cup of tea, here's 30 cups to enjoy. The DVD collection brings together the entire run of the series in some very creative packaging, with a healthy helping of extras to supplement the shows. If you've already purchased the season sets, there's not enough reasons to upgrade to this one, but those who have held off or haven't discovered this show, consider yourself lucky to be able to get the whole show in one great bundle.