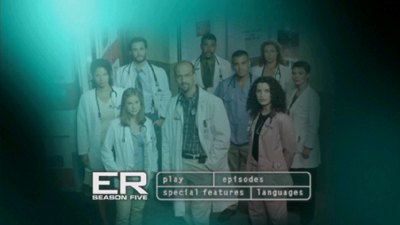 In the mid-1990s, ER was one of the hottest shows on television, and revisiting its fifth season (1998-1999) on DVD, it's easy to see why. Since its debut, ER has been a masterfully constructed drama. For longtime fans, the structure of the show might be a little predictable, as each episode generally focuses on a day in the hospital, leading the viewer through the multiple cases the featured emergency room doctors and nurses cover; however, the particulars of the various maladies aren't what keeps fans coming back for more, it's the cast of characters. The show's producers set up a formula that factored in the many personality types that needed to be covered: the well-meaning young doctor, the tender veteran, the egomaniac, the rebel, etc. It's a formula that has served them well over the years, allowing them to remove and add pieces as need be, meaning the ensemble never relied too much on one star to keep the series continue ticking.

As a regular watcher who has kept up with the show through the years but who has only re-watched season 1 on DVD, ER - The Complete Fifth Season is an excellent place to return to. The first episode, "Day For Knight," serves as a great introduction to the program. Told from the point of view of a new medical student, Lucy Knight (Life Goes On's Kellie Martin), the viewer gets to follow her on her first day, getting a tour of the ER and being brought up to speed on who the players are and where they are at in their medical careers. For instance, John Carter (Noah Wyle) has now been moved up from student to teacher, in a lot ways making eager beaver Knight his replacement. Carter was the natural student whose sensitivity and ambition were always at odds, issues that will continue to dog him now that he is becoming a mentor. Also, we get to see the camaraderie of the staff as they all conspire to surprise their desk manager, Jerry (Abraham Benrubi), on his birthday. 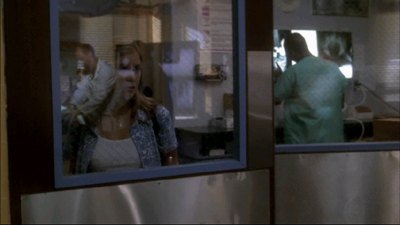 One of the more important story points that comes to the fore in "Day For Knight," though, is the status of Doug Ross. Ross was played by George Clooney, and ER had finally pushed the veteran television actor onto the movie-star map. Season 5 is his last year on the show, and most of the first half of the season is devoted to preparing for the character's exit. In episode 5.1, Ross is on probation for having taken dangerous measures to save a baby born with a drug addiction. He will eventually parlay the lessons he learned from this maverick move into a greater standing in the hospital, but with a greater height comes a greater fall, and another drastic tactic makes his position at County General untenable. Clooney was a perfect choice for Doug Ross because he wasn't afraid to play his natural charisma and good looks for what they were. The dapper doc was always more than a simple anti-authority figure, but a character with real conflicts. His consistent self-belief coupled with his inability to see the consequences of his actions made him noble and tragic.

Given that Clooney exits in a mid-season two-parter ("The Storm"), it's hard to imagine the show bouncing back as easily as it does. His character had two of the better relationships on ER: the romance between Ross and Nurse Hathaway (Julianna Margulies), and his friendship with Jeanie Boulet (the luminous Gloria Reuben), who serves as his sidekick and kindred spirit, despite her soft-spoken demeanor. Both relationships vibrate with genuine emotion and give the show a lot of heart. This, of course, makes it rather painful when Ross leaves, particularly as it tears him and Hathaway apart.

One of the ways the producers combated the void left by Clooney was to strike up a new relationship between the lead ER doc, Mark Greene (Anthony Edwards), and the struggling British surgeon Elizabeth Corday (Alex Kingston). Their courtship is drawn over the final handful of episodes, and the two lonely doctors finding comfort in one another feels like a natural fit. Other story lines that run through the season include Dr. Peter Benton (Eriq La Salle) learning to deal with his son's newly discovered deafness, Kerry Weaver (Laura Innes, who also directs episode 5.20) struggling with her place in the ER and in the world as she begins searching for her birth mother, and Hathaway's discovery that she is pregnant after Ross leaves. Through all of these, the characters we have been getting to know over the years continue to grow, giving viewers every reason to stick with them.

And, of course, there are the bizarre and interesting medical cases, such as the two brothers who spilled carpet glue all over themselves and came into the hospital stuck together, or when Lucy Knight loses the body of a man with a Prince Albert piercing on his penis. Of the more serious cases, the writers tended to focus on parental relationships, plotlines they could use as jumping-off points for Ross and Hathaway on their quest to become parents themselves. These include the young athlete who might lose her leg, the schizophrenic trying to have a baby, and the mother whose son is dying of an untreatable, debilitating disease. And, of course, there are whacky guest stars, such as Harvey Korman playing an obnoxious senior and Teri Garr as a woman with medical empathy, the one who finally spills the beans to the staff about Hathaway expecting. 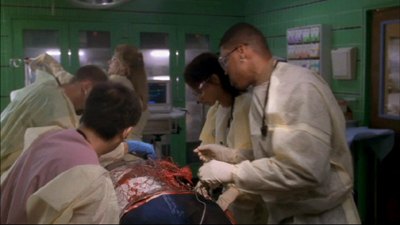 Naturally, when fulfilling an order for twenty-two episodes, it's nearly impossible to strike every note perfectly. Some story lines don't work as well as others. Particularly, when the doctors are taken out of their regular environment, it tends to play as a bit forced. In episode 5.8, "The Good Fight," Carter and Knight go on a hunt for a father who has disappeared, leaving his daughter without a supply of the rare blood type only he can provide, and their amateur sleuthing is bit too easy. These kinds of episodes serve the function of giving the actors room to stretch, but they steer the focus too far away from what the show does best. Benton takes center stage in "Middle of Nowhere" (#5.16), traveling to Mississippi for two weeks at a rural clinic, giving Eriq La Salle the opportunity to do more than preen and worry. While a lot of his interaction with the locals works very well and Benton ultimately learns important lessons that will shape his future on the show, it also allows the writers to indulge in more clichés than are healthy. I mean, a breach birth in the middle of the bayou? Was there no elevator they could get stuck on to really hit the been-there-done-that gong?

The lowest ebb of season 5, however, is the episodes with new ER chief Amanda Lee (Mare Winningham). Though Winningham is an excellent actress, the character's arc comes off as straining for sweeps-week dominance. Her contrived confidence scheme and fixation on Mark Greene didn't ring true when the shows originally aired, and they certainly don't get any better with age.

Even so, every winning team has to have its strike outs. Or, to use a more apt metaphor, no matter how good a doctor is, he has to learn that he'll lose a patient here and there. Given that the people behind ER - The Complete Fifth Season get it right far more often than they don't, we can forgive them their failings. ER will go down as one of the best television dramas of all time, and season 5 just possibly could be considered its true heyday. 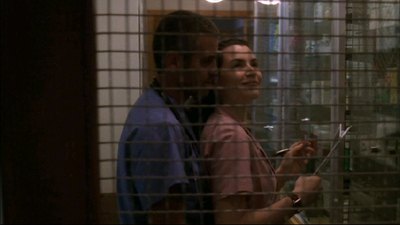 Video:
ER was one of the first TV series to be broadcast in widescreen, and this DVD set preserves broadcast aspect ratio with a "matted" letterbox format enhanced for widescreen television sets. While it would have been easy to put the manufacturing of the disc on autopilot and just churn another season out, the picture quality is pleasantly strong from start to finish. I noticed no glitches or errors on any of the six DVDs. Every episode was clean.

Sound:
There are no fancy sound mixes, but it's not a problem. Everything sounds good. There are also Spanish and French subtitles.

Extras:
A good portion of the episodes have deleted scenes. They are billed as "Outpatient Outtakes," which is a good name for them as a lot of the deletions are glimpses at patient story lines that got cut before airing. Most of the scenes would have been just fine as part of the episode, so presumably they were cut for time. Other deletions tend to round out stories, such as a scene from #5.21 where we discover what happened to a girl who was missing after a car accident. In one case, we even see a subplot with Jeanie Boulet that the show's makers were sorry enough to see go that it reappears in a later episode. Overall, the outtakes are really good, there are only a couple of trims that felt like they didn't need to be resurrected for this collection.

There are two ways to access the deleted scenes. One is from going to the menu for episode selection and clicking on the scissors icon. Or, for those of us who like to pop in a disc and hit play all, watching all the episodes straight through, the easier access is to be had on the special features menu, where you have the option of choosing the "Outpatient Outtakes" one at a time or playing all of the deleted scenes for each disc together.

Disc 6 has the added bonus of a gag reel, titled "Cutups." Now, I'm pretty jaded when it comes to gag reels. There are only so many times you can watch actors crack themselves up before it gets a little boring. "Cutups" is a rare exception, as most of the chosen scenes are pretty funny. Clooney the Prankster shines, of course, even pulling off lodging a pie in someone's face. The cast also has a preoccupation with sexual innuendoes.

The packaging is nicely done: a slim, folding cardboard holder with a slipcase. The interior holder has a disc-by-disc, episode-by-episode guide, giving synopses, writing and directing credits, and noting which episodes have "Outpatient Outtakes."

FINAL THOUGHTS:
One of television's strongest franchises, ER has also become a strong DVD franchise. The Complete Fifth Season speaks to the show's reputations on both counts: a well-written, well-acted drama given a strong DVD presentation. Fans of the serial will want to revisit the last season of Doug Ross (George Clooney) so that they can say farewell to one of their favorite characters, and the uninitiated will also find that season 5 is a fine jumping-on point. Throw in extras that, for once, aren't perfunctory, but actually worth it, and ER - The Complete Fifth Season becomes a great way to cure your entertainment ailments. Highly Recommended. 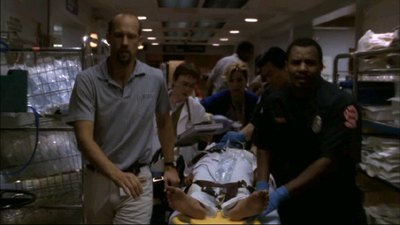