Jack of All Trades - The Complete Series

Jack of All Trades is the direct creation of Eric Morris, who wrote much of the show himself, but largely the product of what some may call the "Holy Trinity" behind a cult favorite, the Evil Dead Trilogy: Sam Raimi and Rob Tapert (executive producers) as well as the star of the show, Bruce Campbell. It ran for two seasons and a total of 22-episodes in 2000, forming the latter half of the "Back2Back Action Hour" alongside Cleopatra 2525. Whereas Bruce's previous television series (also slated for release on 7/18/06), The Adventures of Brisco County, Jr., has been described as being just under over-the-top, Jack retains little to no subtlety; it is very much over-the-top, which is, in essence, the nature of the show. Not only that, but it boasts one of the most rollicking openings in the history of television, featuring singing pirates, bar maids, soldiers from the Revolution, and even a French parrot named Jean-Claude. Don't be surprised if its catchy theme gets stuck in your head--I sometimes even find myself humming it aloud! 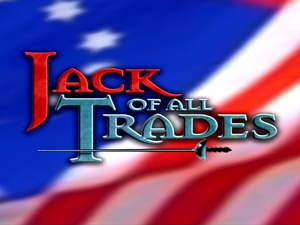 It's 1801, and the American Revolution has just been won. As a result, Jack Stiles (Bruce Campbell) is assigned by Thomas Jefferson to thwart any and all attempts by French Emperor Napoleon Bonaparte (Verne Troyer a.k.a. Mini-Me from the second and third parts of the Austin Powers Trilogy) to colonize the New World, particularly concerning the tiny East Indies island of Pulau Pulau. Here, he is teamed up with the stunning British secret agent and inventress Emilia Rothschild (Angela Dotchin) with the cover of being her personal attaché. In addition to playing the part of man-servant, Jack must occasionally take on the role of the legendary folk hero, the Daring Dragoon. This allows him more freedom in his thwarting of the French, although because the costume's mask only covers up part of his face and his voice remains unchanged, it's puzzling how the residing French Governor Croque and his compatriots time and again fail to uncover the masked hero's true identity! 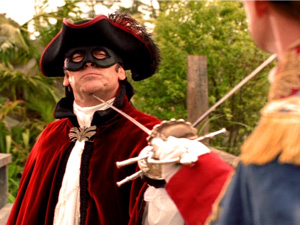 The Daring Dragoon finds himself in a stalemate with Captain Brogard.

An array of historical figures make appearances on Jack including, but not limited to: Thomas Jefferson, Blackbeard (the infamous pirate), Benjamin Franklin, the Marquis de Sade, Lewis & Clark, a relative of Leonardo Da Vinci and, of course, Napoleon Bonaparte himself, cleverly portrayed by Verne Troyer. While Jack is hardly historically accurate, its historical references make for entertaining subject matter for Jack and Emilia to interact with throughout the show in a myriad of situations. 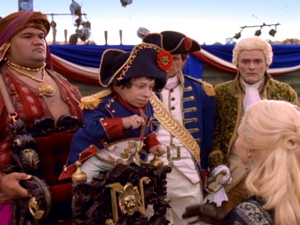 Jack of All Trades is a fairly silly show, but one which is enjoyable to watch. The cast seems natural, and the chemistry between Bruce (Jack) and Angela (Emilia) is particularly strong. Their back-and-forth banter coupled with the undeniable sexual tension between the two of them keeps the show going. Unfortunately, unlike Brisco, Jack's series finale seems rather abrupt, leaving something to be desired. There is this lingering sense of a lack of closure; nevertheless, the show still manages to hold itself together in the end. It's just too bad that the end had to come sooner than later. 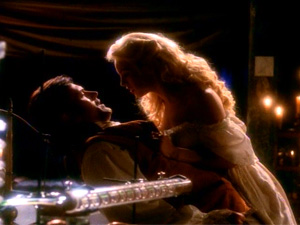 Jack finally gets lucky... Or does he? 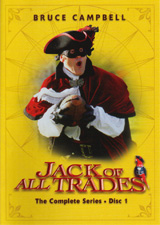 Episode 1 - Return of the Dragoon (1/22/2000): The adventure begins when Jack Stiles is sent by Thomas Jefferson to a tiny island in the East Indies where he teams up with a beautiful British inventor and secret agent to take on Napoleon Bonaparte.

Episode 2 - Sex and the Single Spy (1/29/2000): Jack tutors Emilia in the art of seduction, and she then tests her skills on an eminent French spy from whom she must retrieve a secret code.

Episode 3 - The Floundering Father (2/5/2000): Benjamin Franklin is kidnapped while journeying to France to build a weapon of mass destruction for Napoleon, and Jack and Emilia must come to his rescue.

Episode 5 - The People's Dragoon (2/19/2000): Emilia and Jack, who is disguised as the Dragoon, work together to retrieve a shipment of American gold that has been intercepted by the corrupt Governor Croque.

Episode 6 - Raging Bully (2/26/2000): The stakes are high when Jack must beat Napoleon in a game of poker to win Louisiana back from the French--and save his own life.

Episode 7 - Daddy Dearest (3/4/2000): It's all in the family when Emilia's father, who also happens to be Britain's most decorated spy, comes to Pulau Pulau to supervise a mission.

Episode 8 - One Wedding and an Execution (3/11/2000): Jack is determined to save Emilia from saying "I do" after she agrees to marry Napoleon in an attempt to save England from a French invasion. 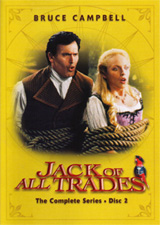 Episode 9 - Croque for a Day (4/15/2000): When Napoleon sends an inspector to evaluate Croque, Jack and Emilia scheme to keep the benign governor in office rather than have him replaced by someone who will bring real damage.

Episode 10 - Dead Woman Walking (4/22/2000): When the Dragoon is blamed for the desecration of a cemetery, Emilia plays dead in an effort to clear his name.

Episode 12 - Up the Creek (5/6/2000): The famed explorers Lewis and Clark, two men who really should just ask for directions, think their deserted island is actually Oregon and can't fathom the idea that the Revolutionary War is over.

Episode 13 - X Marquis the Spot (5/13/2000): It's a little bit of pleasure and a whole lot of pain when Jack and Emilia are sent to the Marquis de Sade's island of torture and participate in a leather-clad triathlon in order to retrieve King George's stolen crown.

Episode 14 - It's a Mad, Mad, Mad, Mad Opera (5/20/2000): It's not over until the fat lady sings when Jack and Emilia are assigned to protect the unstable King George from a staged assassination attempt.

Episode 15 - A Horse of a Different Color (10/7/2000): Someone's horsing around with the safety of the island when Katherine the Great threatens to destroy Palau Palau unless her champion horse is returned within 24 hours. Note: Season 2 begins here.

Episode 16 - Shark Bait (10/14/2000): It's all hands onboard when Jack and Emilia enlist the help of the legendary pirate Blackbeard to thwart Leonardo Da Vinci's great, great, great, great grandson from destroying the annual Founding Father/Son cruise. 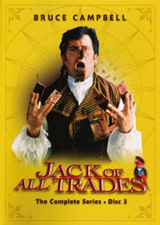 Episode 17 - Monkey Business (10/28/2000): A priceless silver monkey by the WallaWalla Bing Bang tribe has Emilia and Jack ape mad at each other when they're both ordered to send it to their respective countries.

Episode 18 - The Morning After (11/4/2000): There's a lot of bitter grapes going around when Jack and Emilia wake up in bed together after drinking the "special" wine that Napoleon plans to send to every world leader.

Episode 19 - Croquey in the Pokey (11/11/2000): When the governor is jailed for a planned assassination attempt on Napoleon, it's a battle behind the bars as Jack gets himself sent to prison so he can protect Croque from every thug he's ever sentenced.

Episode 20 - One, Two, Three, Give Me Lady Liberty (11/18/2000): Napoleon seems to be turning over a new leaf when he has a special statue sculpted to give to America, but Emilia and Jack soon learn that behind the stone beauty lies a beast.

Episode 21 - Hamnesia (11/25/2000): Emilia goes hog wild when an accident erases her memory, including the location of a priceless land deed, and Jack convinces her that she's really an uninhibited party animal.

Episode 22 - Seventy Brides for One Brother (12/2/2000): Emilia finds herself one woman among many when she is kidnapped and placed in a sultan's harem, but the longer she stays, the more she refuses to leave without the other "wives."

Episode synopses are courtesy of each disc's respective back cover insert.

Universal presents Jack of All Trades across a 3-disc thinpack set, housed in a sleek cardboard case. As space is becoming more of an issue for avid DVD aficionados such as myself, this is certainly a nice alternative to the rather large tri-fold sets which are fairly commonplace in the realm of TV on DVD. 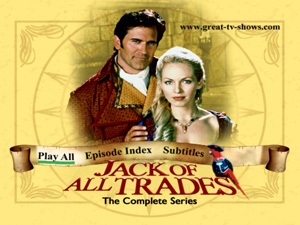 This 3-disc set offers an English 2.0 Dolby Digital stereo track with optional subtitles in English for the deaf and hard-of-hearing. A 5.1 mix would've been ideal, however; the 2.0 track is more than sufficient and serves its purpose well. The dialogue is easy to understand, while the sound effects and background music come through nicely. There are no dropouts or distortions.

Jack of All Trades is presented in its original 4:3 or 1.33:1 full frame aspect ratio, preserving the format of its television exhibition. The transfer is quite good, appearing clean, clear, and crisp for the duration of the series. The colors are bright and vivid with the blacks looking nice and dark.

Sadly, there are none.

When all is said and done, Jack of All Trades is one of those shows you can come home to after a hard day's work for cheap laughs, abundant one-liners, and plenty of swashbuckling adventures. Sure, it can be a bit childish, immature, and historically inaccurate at times, but it's perfect for temporarily putting your brain on stand-by and just having some fun. While lacking in extras and not as strong of a show as Brisco, all elements considered, Jack succeeds in that it doesn't try to be more than it is and is worth checking out. To top things off, the price is right, especially for a complete series. Recommended.