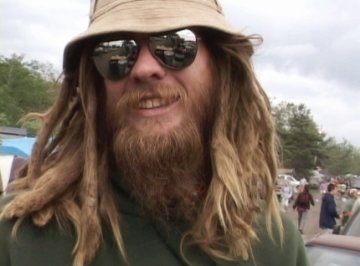 Every so often, I sometimes wonder how certain screeners find their way into my lap. I'm a fan of documentaries off the beaten path---which are slowly becoming the norm on DVD, if you haven't noticed---so I assume that's how I got paired up with Steven R. Hurlburt's Dreadheads, an entertaining little film about dreadlocks and the folks that wear 'em. As a thinly-haired man regularly self-shorn by Gillette's latest eight-bladed razor, I'm near the opposite end of the visual spectrum---but as the back cover for Dreadheads emphasizes, you don't have to be part of the subculture to enjoy what's been assembled here.

So what is assembled here? Essentially, Dreadheads gives us a brief overview of the hairstyle's history, casually interlaced with participation from regular (and not-so-regular) Joes who favor this unusual hairstyle. Meatier interviews are also on display here, featuring the likes of former Grateful Dead rhythm guitarist Bob Weir, The Dead's Jimmy Herring and a few members of Widespread Panic. We also learn a bit about the "roots" of dreadlocks, evidenced by earlier connections to Rastafarian culture, religious sects, and its journey all the way to modern American society. Very few myths are dispelled along the way, especially in modern-day terms: most of the folks seen here are big fans of weed, minimal employment and other ways to whittle away free time. As long as they're not hurting anyone, right?

Here's the bottom line: even if you can't fathom a hairstyle that discourages regular washing, you should still find Dreadheads entertaining for the bulk of its brief 65-minute running time. The soundtrack, featuring music by Project Z, Sound Tribe Sector 9, Slang and Atlanta-based Spunhuny, keeps thing moving between interviews and history lessons, while the colorful visuals keep your eyes interested as well. Dreadheads isn't the year's most urgent or thought-provoking documentary, but it's an entertaining diversion that may just answer a few burning questions.

The DVD by Mutant Girl Films should be well-rounded; unfortunately, the screener copy I received doesn't represent the whole picture. Even so, it's a release that bears further investigation. Let's take a closer look, shall we?

There's room for improvement, but the 1.33:1 transfer for Dreadheads is pleasing and gets the job done. This documentary exhibits strong color with only a moderate amount of softness, grain and edge enhancement; overall, it's on par with most low-budget documentaries. The audio is presented in a standard 2.0 Stereo mix and features clear dialogue and strong music cues. Unfortunately, no optional subtitles or Closed Captions have been included with this release.

Basic but practical, the menu designs for Dreadheads are simple and easy to navigate. The 65-minute main feature has been divided into roughly half a dozen chapters, while no layer change was detected during playback. The packaging is very straightforward, as this one-disc release is housed in a standard black keepcase and includes no inserts of any kind.

Bonus Features
No extras of any kind were included with this screener, though online advertisements promise a few bonus outtakes, interviews and the like. Unfortunately, they can't be reflected in this initial review rating---but if we get a more complete version in the near future, I'll update the ratings accordingly. Hint, hint.

UPDATE (9/11/06) - Not much out of the ordinary here, but it's good to see a few extras added for good measure. Included here are a Bonus Interview, a collection of Outtakes and a brief Video Montage. Only the first two are of any major interest: presented in rough but finished form, they follow the tone of the film and are seemingly cut for time rather than quality. A commentary with the filmmakers might have been nice, but what we do get isn't half bad.

Steven R. Hurlburt's Dreadheads: Portrait of a Subculture is entertaining enough, no matter if you're a "member" of the subculture or not. The DVD presentation is relatively slim, but it combines a decent technical presentation with a few appropriate bonus features. For fans of interesting documentaries---and, of course, the hairstyle itself---Dreadheads is a lightweight release that's certainly worth combing through. Mildly Recommended.