Twenty-two years after German director Wim Wenders and American writer-actor Sam Shepard completed the notorious Paris, Texas (1984) comes what many have tagged as "the sequel"- Don't Come Knocking (2005). A moody piece of Americana set amidst the peaceful mountains of Western Montana the film follows the story of an aging actor (Sam Shepard) who decides to call it quits while shooting his latest western. Tired, fed-up with show-business and looking for some peace Howard heads back to the heart of Utah where his mother has retired. But instead of peace the cowboy will find out that back in Butte, Montana, where his career once picked up, he's got a son. 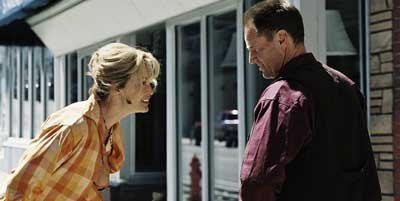 It is hard to tell whether or not the dynamic duo Wenders-Shepard really opted for a sequel to their brilliant Paris, Texas. I tend to agree with what many have said about the melancholic vibes Don't Come Knocking exudes, yes there are certain similarities between these two films, yet part of me is unsure how much Wenders and Shepard meant to build upon what we saw more than twenty years ago. If anything, I sense that Don't Come Knocking provides some sort of a closure to the fascination Wim Wenders had with the American West.

Let's go back a bit though and see why so many have described Don't Come Knocking as a loose sequel to Paris, Texas. The most obvious reason(s) must be Howard, the aging cowboy. He wanders without a sense of direction or, perhaps with one that only he knows about, his life is in a state of free-falling, and those crossing his path are immediately affected by his destructive presence. Sound familiar? Indeed!

Next, it is the intoxicating landscape of the American West-from the dusty roads of Utah all the way up to the blue skies of Montana Wim Wenders and cinematographer Franz Lustig (who also worked with Wenders on the director's unreleased as of yet in the US Land Of Plenty) have captured the wild beauty of the western states in a manner quite similar to what we witnessed in Paris, Texas-long continuous shots, the camera barely moving around as to capture as much of the horizon as possible, time virtually a non-factor.

Next up, a soundtrack by T-Bone Burnett and Joe Sublett that matches perfectly the moody tunes of Ry Cooder. Looking at Howard driving his mother's antique car and listening to T-Bone Burnett's harmonies…you will be hard-pressed not to think about Ry Cooder's "lazy" guitar.

Yet, something is missing in Don't Come Knocking!! Even though the film benefits from notable contributions by Quentin Tarantino's favorite Tim Roth (Gridlock'd), aging-beauty Jessica Lang (The Postman Always Rings Twice), and on-the-rise Canadian star Sarah Polley (My Life Without Me) amongst others chemistry in this production is nowhere to be found.

What truly strikes me as odd here is the fact that well over an hour into the film I was mostly insure how to feel about Howard. If I were to feel sorry for him then his "loser" image certainly wasn't "poor" enough for me. If I were to be entertained by his oddities then they were certainly not odd enough for me. If I were to feel aghast by his inability to communicate his feelings…well, most certainly Howard did very little to convince me that he actually did have any feelings. To sum it all up the script to Don't Come Knocking is lacking substantially and during selected scenes it shows quite well.

What I did enjoy in Wim Wenders' film, surprisingly I must admit, was the classy touch which Jessica Lange provided with her presence. The bitter memories of a doomed affair she once shared with Howard gave Don't Come Knocking something this film could have used in great volume: a sense of realism. Her tired look of a woman who has forgiven the man she could not have together with her desperate attempts to subdue the emotions raging in her soul made Don't Come Knocking less of a disappointment. But a single moment of brilliance can hardly erase 120 minutes of uneventful storytelling. It certainly did not for me!!

Presented in its original aspect ratio of 2.35:1 and enhanced for widescreen TV's Don't Come Knocking looks good but not solid. Colors are lush, contrast is handled quite well, and detail appears satisfactory. Edge-enhancement however is quite an issue with this release and especially during the desert scenes I am convinced that many would be rather distracted by it. I also sense a bit of contrast boosting which while not as noticeable during some of the night scenes is quite obvious during daylight scenes. Certainly however those of you relying on standard tubes won't have much of a trouble sitting thorough this release as most of the issues I mentioned above are quite subtle and would be rather subdued on smaller-size screens.

Presented with an English 5.1 track the film sounds exceptionally well. The mix provided for this release is active (rears are used very well) and I could not notice any disturbing pop-ups or audio drop outs. The music of T-Bone Burnett and Joe Sublett comes off the speakers very well and I am more than satisfied with the audio treatment. The film comes with optional French and English subtitles.

There are four extras on this DVD amongst which the most notable one is the commentary with director Wim Wenders in which he sheds light on the project and how it came to fruition. I made a point to listen to the entire commentary and to be honest with the director certainly provides more than enough inside information here (in perfect English Wenders discusses issues ranging from his preference for "super hawk" anamorphic lenses to the collaboration with Sam Shepard). Next, there is a generic featurette titled "The New York Premiere" which shows the film arriving in the Big Apple with an improvised introduction by the director himself. Next, there is the "Sundance Premiere"-another featurette focusing on the film's presence in Sundance where once again Wim Wenders spares a few minutes in addressing the film's history. Next, there is a rather short interview with Wim Wenders and Eva Marie Saint where the duo focuses on the film's message and how it was made a reality. Last not least there is a rather large gallery of trailers for other Sony Pictures releases.

I have some mixed feelings about this film. I consider myself a big fan of Wenders and his work yet Don't Come Knocking did not strike me as being one of the director's better films. In fact, including the earlier Land of Plenty I think that what we are witnessing here is a sizable change of direction (how ironic as Don't Come Knocking actually emulates Paris. Texas). And I am not sure it is the right one for those who liked Wenders' previous films. RENT IT.