(Ed. Note - We've been informed by MGM that the release of this edition of RoboCop has been placed on hold pending the switch to Fox as their distributor of record. Unfortunately there will not be a Blu-ray Disc of RoboCop on store shelves until further notice.)

Paul Verhoeven is clearly some kind of insane genius. After establishing a reputation for making successful but frequently controversial films in his native Holland, the crazy Dutchman came to the U.S. to bestow his unique cinematic gifts on an unsuspecting Hollywood. He didn't get very far with his first American film, the bloody but forgettable Flesh + Blood, but he sure hit it out of the park with his next one. By all accounts, RoboCop should have been cheesy direct-to-video science fiction trash, the type relegated to video store shelves next to all those crappy Trancers sequels. Its silly title and simplistic concept ("Part Man. Part Machine. All Cop.", the ads proclaimed) had the industry snickering. But damn, what Verhoeven made from the film is pure art.

You know the story by now: Do-gooder cop Alex Murphy (Peter Weller) gets gunned down in the line of fire, and unwittingly resurrected by the greed-mongering OCP corporation as an experimental police cyborg. The result looks something like Frankenstein's monster as built by an American auto manufacturer. The human test subject's memories are meant to be suppressed, all the better to focus on his robotic duties, and at first the program is a huge success. Robo gets right to work cleaning up the unsavory criminal elements in Old Detroit so that OCP can move in with their expansive Delta City development, which is sure to earn the Board of Directors billions in profit. Of course, you just can't kill the human spirit, and soon Murphy's humanity starts to break through his robot shell, a prospect terrifying to his corrupt corporate masters who don't want his growing search for the truth to interfere with their plans.

Try to forget its own lousy sequels and spin-offs for a moment; the original RoboCop is rousing entertainment. Its outrageous bloody violence is matched only by its cunning wit. The film was intended as a satirical critique of the 1980s, with its backstabbing evil yuppies and growing commercialization of public institutions, but it's really rather amazing how many of its themes are still timely. What is OCP other than Haliburton, a powerful conglomerate with hidden agendas and its grubby hands in every aspect of American government? The police in many major cities have become nearly as paramilitary as those in Verhoeven's futuristic vision. Is the ridiculous 6000 SUX luxury car with its 8.5 mile-per-gallon fuel efficiency that far removed from a Hummer? The sensationalized "infotainment" newscasts that break into the story periodically were meant as an exaggeration but have sadly become reality; Verhoeven cast Leeza Gibbons as a network news anchor as a joke, but just look at the airheads and blowhards we have populating the cable news outlets these days. The movie was almost as prescient as it is kick-ass.

And kick serious ass RoboCop does. Even taken on its most basic action adventure level, the movie delivers on all counts. Filled with cartoonish but nonetheless visceral violence, Verhoeven keeps pushing the movie further and further over the top. It works brilliantly as both a slam-bang macho action movie and at the same time a parody of slam-bang macho action movies, all layered with wickedly subversive social satire. The movie has a whip-smart script, some sterling dialogue, and terrific performances from Weller and a stellar cast of recognizable character actors (Nancy Allen, Ronny Cox, Miguel Ferrer, Kurtwood Smith, Ray Wise, Daniel O'Herlihy, and Paul McCrane among others). It's exciting, hilarious, and much smarter than it has any right to be. RoboCop is nothing short of a masterpiece of the genre.

RoboCop debuts on the Blu-ray format courtesy of MGM Home Entertainment via their limited distribution deal with Sony Pictures Home Entertainment. The disc contains only the R-rated U.S. theatrical cut of the movie, not the unrated Director's Cut previously released on DVD by The Criterion Collection.

The RoboCop Blu-ray is encoded in High Definition 1080p format using MPEG2 compression on a single-layer 25 gb disc. The movie is presented in its American theatrical aspect ratio of approximately 1.85:1 with tiny letterbox bars at the top and bottom of the 16:9 frame. The earlier Criterion DVD was framed for the looser 1.66:1 European theatrical ratio per director Verhoeven's preference. In comparison, the Blu-ray's framing is a little tight and Criterion's is generally better, though the difference is not severe enough to compromise the movie's compositional sense. As for other picture quality concerns, however…

Holy crap in a can, this disc looks horrible! I've written a couple of previous Blu-ray reviews where I'd called certain discs the worst High Definition image I'd ever seen, thinking HD couldn't possibly get any worse, but here Sony just keeps lowering the bar for the format. The RoboCop Blu-ray is U-G-L-Y. And before you write in to chastise me that, "The movie is 20 years old. What'd you expect?" or "It was a low-budget movie. It can't look much better", save your breath. Those are bullshit excuses and dead wrong. The problems with this disc all stem from the video transfer and the Blu-ray authoring. RoboCop is not supposed to look like this. No movie is supposed to look like this.

Problem #1 is the color transfer, which is recycled from MGM's RoboCop Trilogy DVD box set. The movie had a few different releases on DVD, starting with a Criterion edition (long out of print) ported from their 1995 laserdisc. Criterion's transfer was approved by Paul Verhoeven, but unfortunately was mastered only in non-anamorphic letterbox format. When MGM took over the distribution rights, they struck a brand new HD master without supervision or approval from anyone associated with the film, and the studio made a few questionable (let's just use the word "terrible") artistic decisions about how the movie should look.

MGM did their best to clean up and sharpen the picture, and indeed it has a lot more clarity and detail than Criterion's transfer, but they oversharpened it with artificial edge enhancement and pumped up the colors way beyond their photographic intentions. As a result, colors are oversaturated throughout the film; flesh tones are frequently orange or red and look unnatural. Metallic silvers are often shaded deep blue. It looks ridiculous, like a cartoon version of the movie. The contrast range is also distorted, with black levels that crush shadow detail and whites clipped on the high end. The edge enhancement is liberally applied and halos are visible all over the place. The Blu-ray image would be considered reasonably sharp by DVD standards but rarely has the detail or depth of good High Definition. I'll be kind enough to say that a few selected scenes look great (mostly in close-ups), just not enough of them to salvage everything else that's wrong with the disc.

Sadly, the awful color transfer is just the beginning. The Blu-ray authoring for RoboCop is a compression nightmare. I almost cannot believe how incompetent the work done here is. This is by far the worst digital compression I've ever seen on any High Definition format, and in fact it's been years since I've seen even a regular DVD this bad. Do you remember that notorious original DVD release of Highlander? That's what this looks like. Yes, it's really that bad! This is VCD-quality hackwork. Numerous scenes throughout the film are swarming with compression noise and gigantic pixelation blocks. These cannot be confused with film grain; they're purely digital artifacts, and they're obscene.

I wish I had the ability to take screen-shots that could do justice to this travesty. At the current time, this is the best I can do. Even in this reduced size, you can see the unnatural patchwork patterns to the grain in the sky (which is meant to be one solid color in this shot). It looks even worse at full size and buzzing with motion. 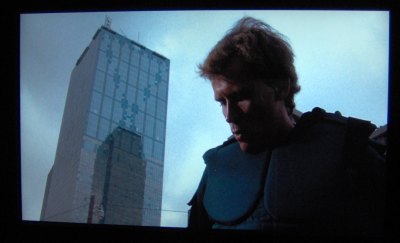 I'm not even going to bother complaining about the occasional dirt and debris on the source elements. I'll concede that this is an older, low-budget movie, and some of that grit may be endemic to the optical compositing processes used for the visual effects. Considering everything else that's wrong with the disc, that's the least of its problems. This Blu-ray release is an embarrassment. The people responsible for it should hang their heads in shame and never work in the industry again.

The RoboCop Blu-ray disc is not flagged with an Image Constraint Token and will play in full High Definition quality (if you can call it that) over a Blu-ray player's analog Component Video outputs.

The movie's soundtrack is provided in uncompressed PCM 5.1 format or in standard Dolby Digital 5.1. To say that the audio is mediocre must sound like high praise in comparison to the video. RoboCop was originally released to theaters in 2-channel Dolby SR surround, and was nominated for a Best Sound Academy Award in 1988. The Criterion DVD preserved this in Dolby Digital 2.0 format, but MGM attempted to spruce it up with 5.1 remixing. The results are underwhelming. The track sounds very much like an artificial 5.1 mix, with hollow ambience and gimmicky directional steering. Fidelity is shrill and bass is weak. It sounds OK in general, but color me unimpressed.

The PCM track offers little to no audible improvement over the DD 5.1. Since PCM eats up a huge chunk of disc space, this wasteful audio format is largely responsible for the terrible video quality we get on discs like RoboCop. Shame on you again, Sony.

All of the bonus features on this Blu-ray title are recycled from the DVD edition and are presented in Standard Definition video with MPEG2 compression. Most but not all of the supplements from the RoboCop Trilogy DVD have carried over (MGM and Sony do not have the rights to any of Criterion's supplements):

That's it for features related to the movie, though we do get three HD trailers for other unrelated Sony movies. Missing from the DVD are a pair of vintage featurettes, some RoboCop trailers, and a still gallery.

Hidden on the disc is a selection of HD test patterns. You can access these by entering 7669 on your remote control from the disc's main menu. Use the Skip button to page through the patterns. Please note that due to an error in the Sony encoder used to author the disc, blacker-than-black and whiter-than-white portions of the video signal have been clipped, essentially rendering the Brightness and Contrast calibration patterns useless.

I love RoboCop but this is yet another piss-poor Blu-ray embarrassment from Sony. They need to get their act together pretty quickly if they expect the format to survive. As great as the movie is, I can't recommend the disc for purchase. Stick with a rental until the movie gets re-released in decent quality sometime down the line.

Updated News! Apparently MGM has cancelled the RoboCop Blu-ray release. The official explanation has it that the movie now falls under MGM's new distribution deal with Fox Home Entertainment and will be re-released under that label at some point in the future, but I suspect all the negative advance feedback about the Sony disc quality may have played a part in their decision. Maybe the studios listen to consumer complaints after all. It's nice to believe so, anyway. We at DVDTalk will be sure to keep you informed if MGM and Fox re-release the movie with (hopefully) some quality improvements.