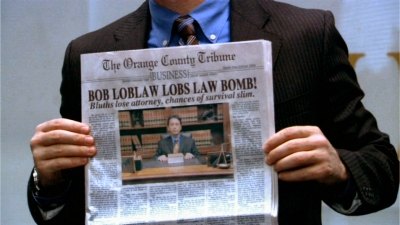 As the saying goes, "It's not about the destination…it's about the journey," and this couldn't be any more appropriate for a neglected but memorable series like Mitchell Hurwitz's Arrested Development (2003-2006). Doomed to the same fate as countless other critically acclaimed yet commercially abandoned shows (see also: Freaks and Geeks, My So-Called Life, Firefly et al.), this fast-paced sitcom once again proved that a cult following can't always pay the bills. The awkward broadcast treatment by Fox didn't help matters any---if you'll recall Futurama's fate, at least until recently---but at least Arrested Development has found something of a second life on DVD, as evidenced by the popularity of the first and second season collections. Though we're not likely to see new installments of AD anytime soon, look on the bright side: this third and final volume brings the total count to over 50 episodes of consistently entertaining comedy. It's like "The Classic 39" all over again…with a few extra episodes, just for good measure.

With that said, I've got a little confession to make: not only did it take yours truly until recently to give Arrested Development a spin---yes, on DVD, like many other slowpokes---but I wasn't all that thrilled with it, not at first. Don't get me wrong: I found it funny at times and enjoyed the odd cast of characters, but the total package just didn't scream "appointment television". It all went back to the same saying---about the journey, not the destination---and that's what Arrested Development meant to me, at least on a different level. The rapid-fire jokes and breezy pace resulted in episodes that were over almost as quickly as they'd started, yet the Bluth family's "big picture" didn't seem all that important to me. Perhaps the weekly gaps in-between episodes (or more, depending on Fox's schedule) made for a more urgent and attention-grabbing experience, but the whole back-to-back marathon experience on DVD was almost mentally exhausting.

Despite my initial reservations, Arrested Development began to grow on me as Seasons 1 and 2 wore on; now, they're near the top of the sitcom heap. The spirited performances---not to mention the countless number of running gags and flagrantly tied loose ends---helped to anchor the series as the twists, turns and revelations piled high, resulting in lofty expectations for this third and final season. While it certainly boasts a smaller amount of content (13, in comparison with the 40 combined episodes of the first two seasons), they're fairly close to the show's earlier days in both quality and execution. On the other hand, this could just be nostalgia kicking in: with the benefit of hindsight, the knowledge that this baker's dozen is Arrested Development's curtain call makes it all the more involving. 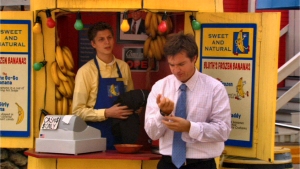 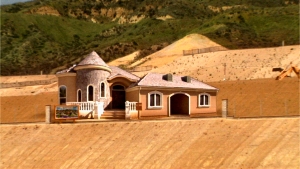 Even with a few stumbles along the way, it's mighty hard to rain on Arrested Development's parade. Many fans lamented the show's increased habit of providing "catch-up time" for those new to the series, but its blistering comedic pace is still front and center. This time around, George Bluth Sr. may actually be Uncle Oscar, the Frozen Banana Stand gets a bit of competition, the Bluth family cabin ends up on the back of a truck…and last but not least, Saddam Hussein may or may not be involved in a ludicrous development deal with the British (whew!). Despite a few missteps near the middle ("Prison Break-In" and "S.O.B.s" spring immediately to mind), a number of outstanding episodes help to raise Arrested Development closer to the level set by earlier seasons. I'm still not completely sold on Charlize Theron's British character, "Rita"---or Ron Howard's excessive narration, for that matter---but opinions can and will vary.

Fans of the series should be glad to see that series finale "Development Arrested" doesn't leave us hanging---and though the television series looks to be closed for business, it's been rumored that an Arrested Development film may be in the works. Either way, Bluth and Fünke disciples will certainly relish this third and final DVD collection: boasting a strong technical presentation and a handful of interesting extras, Season 3 is the smallest in size but certainly not in heart. It's fairly obvious, at least according to the bonus features, that the cast and crew of Arrested Development enjoyed entertaining us from start to finish. Even so, let's skip the group hugs (for now) and take a closer look, shall we?

Quality Control Department
Video & Audio Quality
Presented in its original 1.78:1 aspect ratio and anamorphically enhanced, Arrested Development: Season 3 looks just as excellent as the first two collections. Each of the 13 episodes is crisp and clear, with strong color saturation and no digital problems to speak of. The audio is presented in Dolby Surround (English, French or Spanish) and sounds crisp and clear, boasting strong dialogue and music. Optional English and Spanish subtitles are included for the episodes only. 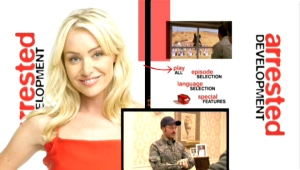 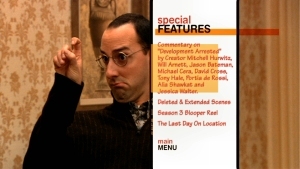 The menu designs (seen above) are bright and lively, but simple enough to make navigation a breeze. Each 20-odd minute episode is presented with less than half a dozen chapter stops, while no layer changes were detected during playback. The packaging for this smaller-sized season is another highlight, as this two-disc set is housed in a slim double keepcase and includes a handy double-sided episode guide. The standard case fits snugly inside a glossy slipcover, ensuring it matches the appearance---outwardly, at least---of the first two seasons.

Spread across both discs, the extras for Arrested Development: Season 3 are entertaining and appropriate. Disc 1 leads off with a pair of Audio Commentaries for "Forget Me Now" and "Mr. F" featuring series creator Mitchell Hurwitz and stars Will Arnett, Jason Bateman, Michael Cera, Davis Cross, Tony Hale, Portia de Rossi, Alia Shawkat and Jessica Walter. These lively sessions are full of interesting stories, obviously favoring personal memories over technical tidbits. It's worth noting that these tracks were assembled via telephone conference call---and while the end result isn't quite as engaging as traditional tracks for this reason, it's the next best thing. Also included is a brief collection of Deleted and Extended Scenes representing five of the seven Disc 1 episodes (excluding "Forget Me Now" and "Notapusy", 6:18 total). Presented in anamorphic widescreen, these all-but-forgotten clips are certainly worth a look for fans of the series.

Disc 2 continues with another Audio Commentary for the final episode, "Development Arrested", also featuring the creator and stars. Next in line is another brief collection of Deleted and Extended Scenes for all of Disc 2's six episodes (8:26 total), also divided into indexed sections. Unique to this second disc is a Season 3 Blooper Reel (7:02); it's light but amusing from start to finish and presented in anamorphic widescreen as well. Closing things out is "The Last Day on Location" (7:35), an interesting behind-the-scenes segment centered around the final day on set. Featuring remarks from members of the cast and creative team, this is an appropriate (but all-too-short) tribute to the short-lived series. All things considered, it's a thoughtful batch of bonus features that fans will enjoy.

Though long-time fans of Arrested Development may still not be over the grieving process, Fox's two-disc collection of Season 3 provides plenty of consolation. The episodes hold their own during this third and final leg of the journey, boasting the same layered comedy and odd characters that earned it a cult following in the first place. Fox's DVD treatment offers a fitting tribute to the series, combining a strong technical presentation with a solid mix of bonus features; all things considered, it's one of the more well-rounded comedy packages since…well, Season 2. Fans of Arrested Development should consider this release a no-brainer, while newcomers to the series should certainly start from the beginning. All things considered, it's a winner on all counts and comes Highly Recommended.

Randy Miller III is an affable office monkey based in Harrisburg, PA. He also does freelance graphic design projects and works in a local gallery. When he's not doing that, he enjoys debating trivial matters and writing things in third person.