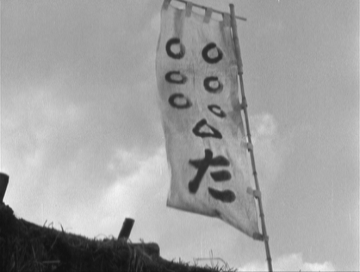 Akira Kurosawa's fifteenth film, Seven Samurai (1954), is widely regarded as his finest effort; an almost scary thought, considering he'd be directing films for another four decades. Yet it's hard to deny such an influential and popular film the proper credit, even though Kurosawa's career was peppered with so many other highlights (including Rashomon, Red Beard, Ran, Yojimbo, Kagemusha, Ikiru and many more). At 207 minutes, Seven Samurai is certainly the late director's longest effort: this sprawling saga of samurai and the farmers they protect is a fine example of action, drama and tragedy, all rolled into one potent package. The formula proved to be so successful that it's been remade and borrowed from many times over; from John Sturges' The Magnificent Seven (1960) to the Roger Corman camp classic Battle Beyond the Stars (1980) and even a rumored Hollywood remake, Kurosawa's original epic remains the one to beat.

As a basic drama, the simplicity of Seven Samurai allows for fine layers of character development. The plight of the farmers is the first thing we're introduced to; the gradual formation of their "counter-attack" comes later. To attract the attention of these samurai, the farmers feign unintelligence, never revealing their treatment of samurai in the past. As the team develops, friendships and mutual respect for one another gradually follow; that is, until the true nature of the farmers is discovered. The two sides don't see eye to eye, but both sides need each other for their own reasons. The layered drama between the samurai and the farmers---both divided by and between one another---is the heart of Seven Samurai, but the action and intrigue run a close second. Performances are spirited all around, highlighted by Kurosawa regulars Toshiro Mifune (as the wily Kikuchiyo) and Takashi Shimura (as the reserved but dedicated leader, Kambei Shimada). Shimura is particularly strong here, especially considering his excellent portrayal of a frail, dying man in Ikiru just two years earlier. 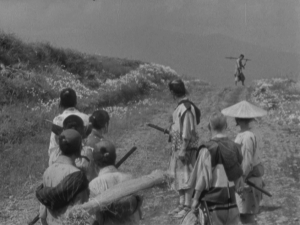 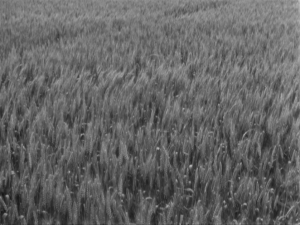 The remainder of the story builds gradually towards the inevitable, tragic conclusion: the farmers and samurai must defend their land from attackers. Until the rain-battered climax, each scene before it establishes these characters as individuals, not the cardboard personalities that headline most modern action films. Whether you've seen it twice or twenty times, Seven Samurai remains an incredibly detailed, entertaining and rewarding experience, worthy of its lofty status as one of the finest Japanese films of all time. If you've seen a more recent film that borrows from its story and style---and chances are, you've probably seen several---you owe it to yourself to see where it all began.

Originally released by Criterion in 1998 (spine #2), Seven Samurai has been given new life on DVD by…Criterion, of course. The faded, worn-out 1998 release was awash in dirt, scratches and other debris, though it was still one of the most impressive transfers to date. While a few video and audio imperfections are still present on this 2006 re-release, the film looks and sounds better than ever: boasting a clean, smooth image and a higher bit rate, the additional breathing room makes this 207-minute film feel all the more epic. Spread over two discs---with a few worthwhile supplements on each, as well as a third disc devoted entirely to bonus documetaries---Seven Samurai looks fresh and vibrant, especially considering the original camera negative is no longer available. Overall, it's easily one of the most well-rounded and respectful treatments of a classic film on DVD, double-dip or not. Let's take a closer look, shall we?

Presented in its original 1.33:1 aspect ratio, Criterion's re-release of Seven Samurai shows a marked improvement over the original 1998 disc (not to mention other region releases). The black-and-white image displays excellent clarity, fine detail and a smooth, film-like appearance, while most of the dirt, debris and scratches that marred the earlier print are nowhere to be found. One important note is Criterion's further use of "picture-boxing", a process which leaves a small black border on all sides of the image to compensate for TV overscan; while this actually benefits many viewers, it will slightly annoy those with properly calibrated setups. It's not a major problem in my book, but you've been warned.

For examples of this picture-boxing ---and a small taste of Criterion's superb clean-up efforts, of course---check out the following screen comparisons between Criterion's 1998 edition (top) and this 2006 re-release (bottom). The fine differences are much more evident on a larger screen, but you should still be able to see improvements nonetheless.

The audio presentation holds its own, though the Japanese Dolby Digital Mono mix sounds roughly the same. It's a bit thin, but still offers a clean atmosphere that purists will appreciate. New to this release is a Japanese Dolby Surround mix, created from the original optical track recordings, stereo music master and production sound effects masters. Fans of Seven Samurai will appreciate this new experience---and if you're not convinced, there's always the original mono.

Also included with this release are "new and improved" English subtitles---a rather controversial subject among purists, for obvious reasons---but these aren't all that different from those found on the 1998 edition (Kikuchiyo swears a bit more, that's for sure!). Optional English subtitles are also provided for all Japanese-language bonus features. 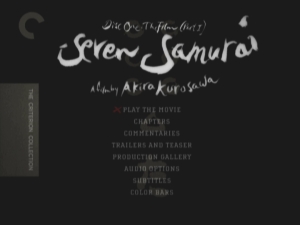 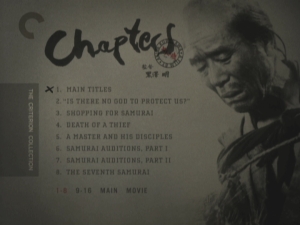 Seen above, the 1.33:1 menus for this release are rather dark but easy to navigate. This 207-minute film has been divided into 29 chapters over the first two discs, while no obvious layer changes were seen during playback. This three-disc set is housed in a handsome matte-finish digipack case (with an outer slipcover) and includes a thick booklet with essays by Kenneth Turan, Peter Cowie, Philip Kemp, Peggy Chiao, Alain Silver and DVD Talk's own Stuart Galbraith IV. Also of note are tributes by Arthur Penn and Sidney Lumet, as well as an autobiographical piece from the late Toshiro Mifune.

Bonus Features
Criterion rarely disappoints when it comes to bonus material, and this re-release of Seven Samurai is no exception. Spread out evenly over all three discs, these supplements won't disappoint fans of the film; even better, we don't lose anything from the original release (save for the fist print's restoration demo, which is null and void at this point).

Disc One leads off with an Audio Commentary with Japanese film expert Michael Jeck; it's the same one from Criterion's 1998 disc, but that's certainly not a bad thing. Though it's a bit dry at times, Jeck does a fantastic job of keeping things moving during the entire film, providing plenty of insight regarding the film's themes, production and history. A brand new "Scholars' Roundtable" Audio Commentary is also included, with film experts David Desser, Joan Mellen, Stephen Prince, Tony Kayns, and Donald Richie. Recorded separately, each participant covers a different stage of the film, allowing for a multitude of perspectives and minimal "quiet time". It's a potent formula, almost necessary for a film of this length.

Closing out this first disc is a series of Theatrical and Teaser Trailers (four clips, 14:31 total), as well as an interesting Still Gallery (below left) with behind-the-scenes production photos and a collection of rarely-seen promotional artwork. It's always interesting to look back on how a classic film was promoted, so this section is a personal favorite. 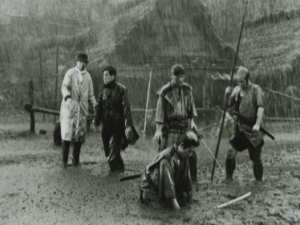 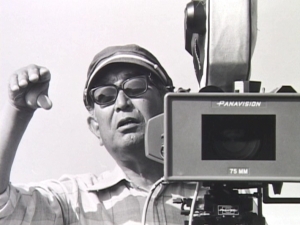 Disc Two only has one bonus feature (aside from the continued commentaries, of course), but it's a good one: another installment of Toho Masterworks' "Akira Kurosawa: It Is Wonderful to Create" (49:08, above right), a long-running series which Kurosawa fans should be familiar with. This segment obviously focuses completely on Seven Samurai and contains plenty of behind-the-scenes production footage and photos. Highlighted topics include the film's original script (written by Kurosawa, Shinobu Hashimoto and Hideo Oguni, who secluded themselves in a room for several weeks) and production details, such as lighting techniques borrowed from Rashomon and creating realistic weather effects.

Disc Three is devoted solely to bonus material and includes two longer documentaries related to Seven Samurai. "My Life in Cinema" (115:52, below left), a 1993 interview with Kurosawa and director/writer Nagisa Oshima from the Director's Guild of Japan, is broad in scope but contains plenty of insight from the late director himself. Kurosawa speaks in detail about his early years in the film industry---including endless battles with studios and censors, as well as his curious exemption from World War II---and offers plenty of advice to aspiring filmmakers along the way. During the interview, Kurosawa frequently mentions his excellent book, Something Like an Autobiography, for those looking to dig deeper into the life of the prominent director. It's a highly recommended read and makes a great companion piece.

The final supplement, "Seven Samurai: Origins and Influences" (55:06, below right), is a new retrospective documentary that focuses on samurai traditions and the films that influenced Kurosawa's epic. Presented in 1.78:1 anamorphic widescreen, it features additional comments from film historians, including participants from the new commentary. Plenty of sketches and finished artwork are on display, as well as frequent references to John Ford (The Searchers, The Grapes of Wrath), Kurosawa's favorite American director. It's a fitting way to close out an excellent batch of extras. 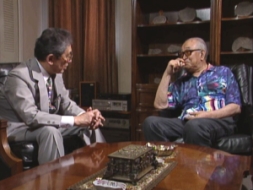 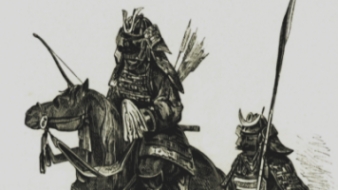 With an outstanding technical presentation and a terrific collection of supplements, Criterion's three-disc reissue of Seven Samurai isn't just a comprehensive DVD package, it's one of the finest releases of 2006 thus far. Kurosawa disciples should consider this a must-have, no matter if you own Criterion's original 1998 disc, the second printing, one of many other region releases…or, perish the thought, if you don't own it on DVD at all. There's no doubt that Seven Samurai is a landmark film in the world of Japanese cinema---and with such a well-rounded treatment on DVD, it's hard not to give this one top honors. Entertaining, organized and concise, this new three-disc edition of Seven Samurai---though a bit expensive---is worth every penny and easily part of the DVD Talk Collectors Series. You'll enjoy it!

Randy Miller III is an affable office monkey based in Harrisburg, PA. He also does freelance graphic design projects and works in a local gallery. When he's not doing that, he enjoys slacking off, juggling knives, and writing things in third person.