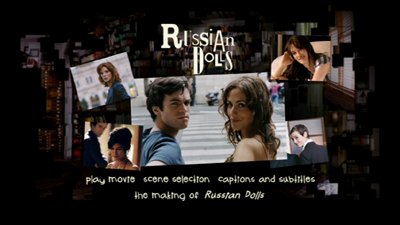 Though only three years have passed in the real world since writer/director Cédric Klapisch released L'Auberge espagnole (a.k.a. The Spanish Apartment), it's been five years in his fictional world. Xavier (Romain Duris), the befuddled Frenchman who went to Barcelona to study economics in the first picture, is now a 30-year-old writer living in Paris. Russian Dolls finds him riding a bullet train, desperately trying to keep his iBook powered up so he can write down the story of his multiple love affairs and how he ended up traveling to where he is going. Over the course of his trip, he will get almost the entire tale onto the screen, leading us right up to the moment when he reaches his destination.

Though L'Auberge espagnole became a cult hit, finding a faithful audience on DVD, I have to admit that I was pretty unimpressed by it. I found the story of international students sharing living quarters in Spain to be much ado about nothing. It was competent fluff, little more. I think part of the problem was that I disliked more characters than I liked, and that can take the steam out of any film. The lazy life of self-obsessed students held no appeal for me.

Initially, I thought Russian Dolls was going to be more of the same. Since returning to France and switching his career from numbers to letters, Xavier has been struggling to sell his first novel, which just happens to be called L'Auberge espagnole. He makes his living by writing articles for various magazines, and he just switched over to television soap operas and ghostwriting celebrity biographies. He has finally gotten out of his relationship with Martine (the always wonderful Audrey Tautou), but they remain close friends. There is no one special lady in Xavier's love life--there are many. 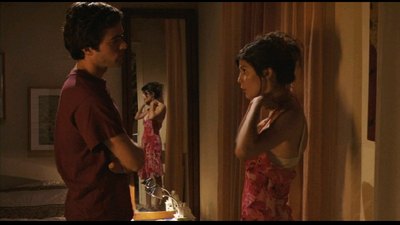 As Xavier bounced from woman to woman like a pinball that doesn't know when to call it quits and just roll down the middle, I found myself rolling down that same middle and giving in to Russian Dolls. Maybe it's because Klapisch has decided to focus on this one character, but something about the sequel clicks in ways the original never did. It's still fluffy, make no mistake, but it's engaging fluff. I daresay it's got more brains and heart than the previous movie, and though Xavier's romantic blindness can be frustrating, I ended up liking the guy and wanting him to figure it all out.

The main question Xavier is posing in the novel we are watching him write, and thus the question Klapisch is posing in the film, is what exactly does true love mean? Xavier is writing a love story for television, one where he is instructed to rely on cliché and to give the audience the kind of sappy ending they desire, but it doesn't ring true to him. Though he seems to enjoy dating the salesclerk Kassia (Aïssa Maïga, Caché), he bails on her at the first sign of trouble. His lesbian roommate, Isabelle (Cécile De France), one of his friends from Barcelona, seems content jumping from partner to partner the same way he does, so she's no help. Martine may be closer to what he's looking for, and certainly there is still a connection between them, but she is asking for too much. He consigns her to the role of the princess who is searching for a prince, and Xavier refuses to wear that kind of crown, no matter how much he may want to.

Amusingly, Xavier gets an example of real romance from the last place fans of L'Auberge espagnole would expect: William, the loutish hooligan played by Kevin Bishop. The obnoxious boy has grown into a man, and he's fallen for a Russian ballerina named Natacha (Evguenya Obraztsova, a real-life member of the Kirov Ballet Company). He has even gone so far as to learn Russian so he can be with her. It's William's wedding that will bring all the Barcelona roommates to St. Petersburg, where Xavier will finally have to answer his own question. He ends up faced with two choices, a very real relationship he has been forming, or chase after the perpetual dream girl, the 24-year-old model Celia (Lucy Gordon, The Four Feathers), whose autobiography he is writing. Can Xavier settle down in the present or always be chasing the fantasies of what might lay ahead? 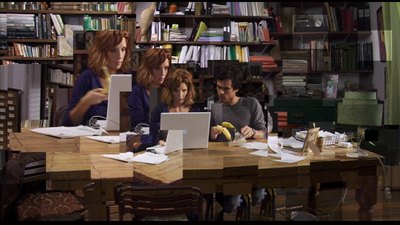 Cédric Klapisch has refined the vivacious visual style that was L'Auberge espagnole's greatest strength. Throughout Russian Dolls, he uses multiple screens and special effects to illustrate intangible emotions. In the scene where Xavier explains how Martine is a princess, she actually transforms into one, and the background becomes an enchanted forest. When talking on the phone to his mother, Xavier sees her image projected on a building across the street. When he and a paramour discuss the patterns of romance and the moments shared between two lovers, their images multiply, become layered, repeat on themselves, as if to say that love is infinite and will always be just as good as that very moment.

Russian Dolls may begin as a seemingly light exercise, but it's a deceptive entry into a more complex outline of human relationships. It is witty and frustrating and at times emotionally bare, each mood tracking the various changes its main character, Xavier, goes through. You'll have to watch and see if Klapisch takes the advice the TV execs give to Xavier and gives his audience the ending they want. Don't worry, though, there's plenty of good stuff to pass the time on the way. 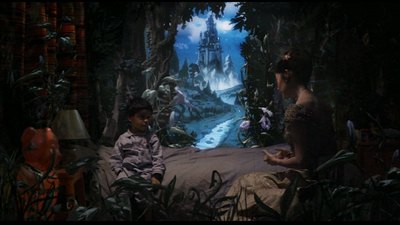 Video:
The Russian Dolls DVD was mastered in a 4X3 "matted" letterbox picture, preserving its theatrical aspect ratio. The colors are very nice, and everything looks fresh-out-the-box perfect.

Sound:
The film is mixed in 5.1 in its original French language. The English subtitles are pretty good, only going too fast a couple of times. I have one major complaint, though: Russian Dolls is multilingual, and the subtitlers have chosen to translate everything. This means that even in the many, many scenes where the characters speak in English, the subtitles keep running. It kills the effect of the switching languages, and is an unnecessary distraction.

Extras:
There is a short making-of featurette that runs close to nine minutes. If for some bizarre reason you decide to watch it before the film, be warned: they open the documentary with the very last scene of Russian Dolls, so you'll have that spoiled for you. Otherwise, it's a fairly standard little program, though watching the long, coordinated steady-cam shot inside the Russian house is pretty fascinating.

FINAL THOUGHTS:
Though the DVD presentation of Russian Dolls isn't going to win any awards for innovation, the movie is very good. It stirs the romantic juices, and the way it's sticking in my head, I have to give it a ranking of Highly Recommended. It's a love affair I'm going to want to go back to. Regardless of how you felt about L'Auberge espagnole, or even if you haven't seen it, it's a new day for Xavier, and thus a whole new tale of breaking up and making up for the movie-going audience. Don't resist it. Just commit. 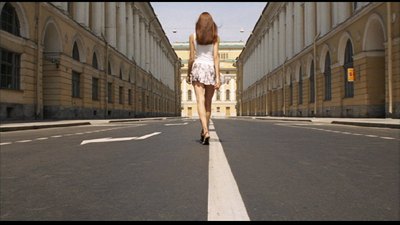