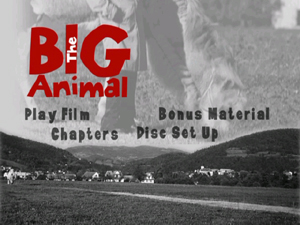 The Big Animal was made in 2000 from an unfilmed screenplay by the late Polish auteur Krzysztof Kieslowski (The Decalogue, Three Colors Trilogy). It was directed by and stars an actor who appeared in many of Kieslowski's films, Jerzy Stuhr. The story is simple and often whimsical, but it works as the kind of poignant social allegory Kieslowski was best known for.

In a small Polish town, Zygmunt Sawicki (Stuhr) is living an average life as a bank clerk, sharing a modest home with his wife Marysia (Anna Dymna). When a circus pulls up stakes and leaves the village, they leave behind one of their camels, and the odd looking beast is quickly adopted by Zygmunt. When he first parades his new companion through the town, his fellow citizens are amazed by it. Everyone stops and gawks, and they all want their picture taken with it. Zygmunt refuses any exploitation of his camel, however, regardless of the big payday he may be turning down.

This refusal to cater to everyone else's whims causes the air to change after the shock of the new wears off. The townspeople either want to be indulged or they want the camel to go, branding it a germ-ridden menace. Zygmunt is loathe to give in to these demands, because the camel has brought so much joy to both of himself and his wife. He plays his clarinet and the animal sings along, and Marysia soon grows accustomed to its company, as well. They even spend their money to build the camel a small stable. When the town starts ostracizing them, they don't budge. These new reactions are showing them exactly what kind of community they live in.

Kieslowski was always interested in what happens when human nature is put to the test, and The Big Animal is no different than the films he helmed himself. Having worked with the great director, Stuhr understands his subtle approach, and he keeps in mind that, up front, The Big Animal should be charming and light of heart. In order for the fascism of conformity to have a real effect, the audience needs to have affection for its victims. The relationship between Zygmunt and Marysia is one of sweet complacency, the kind that can only be fostered after many good years together, and the pure and innocent pleasure the camel brings to their marriage is charming, reinvigorating them both. They are quiet rebels, standing up to a bullying force that fears the new and the different. The townspeople's own objections reveal just how silly they are. If they can't take pleasure in the sight of a hunched little man strolling along with a gawky camel, they really need to try to chill out.

Cinematographer Pawel Edelman (The Pianist) uses gorgeous black-and-white photography to capture the quaintness of the small town. As a character unto itself, it feels both homey and desolate. The film's respect for the landscape gives The Big Animal the feeling of, "If it could happen here, it could happen anywhere." Yet, unlike so many films about rural, working-class areas, this one never looks down on the people it portrays. They may be shortsighted and fickle, but that doesn't necessarily make them bad. The mob mentality devours people of all stripes.

Though Kieslowski's films were generally heavy and emotional, The Big Animal is an excellent reminder that when he tackled less serious fare, he was no less insightful. It's an entertaining, quirky little movie that is full of quiet delights. 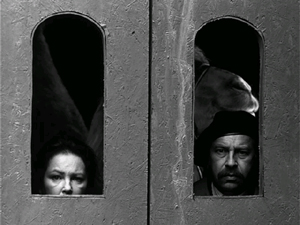 The Big Animal is a full frame feature, and the image quality is perfect.

The original Polish language track is here, with white English subtitles that may be a little large but are certainly easy to read.

Milestone offers several bonus features. Controlled Testimonies is a half-hour interview with Jerzy Stuhr from Polish television. The Big Animal is never discussed, but it still serves as an informative portrait of the actor, who talks candidly about his career and personal life. For a more film-focused interview, there is the short on-the-set feature Rendezvous. The bonuses are rounded out by the U.S. trailer, which if you ever complained about the entire story being told in the trailer, this may be the worst offender I've ever seen. The announcer actually says the words, "In the end..." before describing and showing one of the final scenes of the movie. It's a tender moment between Zygmunt and a child and watching the trailer beforehand would definitely ruin the impact.

Finally, a pdf of the Milestone press kit for The Big Animal can be accessed through your computer.

The Big Animal breathes with understated optimism. This resurrected script by Krzysztof Kieslowski is quirky and often fun, but with deeper messages about the pitfalls of social conformity. Jerzy Stuhr shows a solid understanding of the human comedy, lending an infectious charm to The Big Animal as both its director and star. His touch is light, and so The Big Animal illuminates through entertainment rather than browbeating its audience. Add a couple of well-chosen bonus features, and you have a DVD that is easily Recommended. 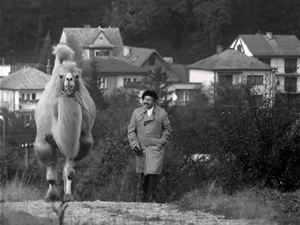