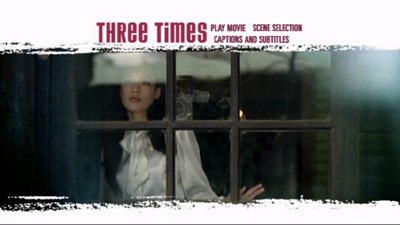 I am completely in love with Three Times.

I realize that is gushing praise. To open with that, it may make readers think this review is going to be rife with hyperbole. Truth is, I sat here for quite a while tossing many lead-in paragraphs around in my head, and none of them seemed right. Everything I came up with smacked of trying too hard, grasping for something profound when all I really wanted to say was how much I am caught up in this movie.

It's not actually a sentiment that is too far adrift from the thematic thrust of Three Times. It's a film that is very much about being in love, about the exhilaration and the pain that romance can bring. Granted, that's the subject of probably 95% of all art, but a special talent can still say something about the well-worn subject that inspires its audience to feel what it's like to have a crush. Hou Hsiao Hsien, the Chinese-by-birth, Taiwan-raised director of other modern love stories like the sublime Café Lumiere, is just such a talent, and with Three Times, he will not only make you fall in love with the whole idea of falling in love, but he'll reinvigorate your love of cinema.

The high concept of Three Times (written by Hsiao Hsien's longtime collaborator Chu Tien-Wen) is that three actors will play three similar couples in separate stories set in 1911, 1966, and 2005. While the stories don't intersect, their grouping creates interesting parallels, and the end result is that you feel like you have watched one couple over several incarnations. The gorgeous actress Shu Qi plays the woman. No one could be blamed for getting completely caught up in her beauty, but Hsiao Hsien recognizes that beyond her good looks, Qi has an undeniable charisma. As he did with her in 2001's Millennium Mambo, the director draws a full character out of his actress. You almost can't call what Qi does in Hsiao Hsien films acting. Rather, she inhabits the screen, filling the entire space just by standing there. In the 2005 section of Three Times, there is a scene where her character, Jing, stands in the dark, smoking and viewing some Polaroids hung on the wall. It lasts a couple of minutes and she says nothing, and yet so much happens.

Hsiao Hsien requires that his actors are always thinking. Action and speech are less important that the appearance of actual living. If the wheels in their brain aren't turning, then they aren't going to be successful in one of his movies. A blank slate must be anything but blank. Shu Qi is up to the challenge, as is her male counterpart in this cinematic duet, Chang Chen. Chen is no stranger to heartthrob roles, having played the rakish thief in Crouching Tiger, Hidden Dragon, but as he proved in his turn as the meek tailor in Wong Kar-Wai's segment of Eros, he's also quite capable of playing a less demonstrative lover. In some parts of Three Times, he can only express his feeling for Shu Qi in the way he looks at her, nothing more. The desire rests entirely in his eyes. 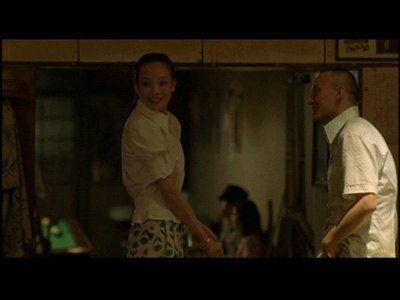 The story opens in 1966, and the segment is titled "A Time for Love." Shu Qi plays May, a girl who works in a pool hall, providing atmosphere and conversation for the male guests. Chen plays a soldier who goes to the pool hall looking for another girl he left in that particular port. She has gone, having been replaced by May, who just as quickly takes over Chen's heart. Every time he is on leave, he comes to visit her, and on one particular break, he discovers she has moved on. To find her is no easy matter; every time he finds where she was last said to be, she has already gone again. Once he catches up with her in another pool hall, he only has a few hours left, and they spend them alone together, eating and walking, enjoying one another's company.

May is a restless character, her roaming spirit indicative of the time. She has nothing to tie her to one spot, and waiting for her man to be out of the service is not enough. A '60s girl has to be pursued. The photography in "A Time for Love" is gorgeous, capturing the luscious colors of the period clothes. The soundtrack is also well-done, mixing Taiwanese songs of the '60s with golden American oldies like "Rain and Tears" by Aphrodite's Child and "Smoke Gets in Your Eyes" by the Platters. The songs perfectly illustrate the dramatic yearning of the two young lovers. If there is anything keeping them apart, it's not a lack of desire, but Chen's sense of duty.

A similar division is in the second story, "A Time for Freedom," set in 1911 when Taiwan was under Japanese rule. Chen plays Mr. Chang, a political writer/activist who regularly visits Qi, a hostess in an upscale tea house. The pair shares many conversations together, and when another girl in the house needs a financial boost to leave and become the concubine to a man who has impregnated her, Mr. Chang volunteers the money. It's a kind gesture, but when Qi inquires about their own future together, there is some question whether or not Mr. Chang can let go of his cause enough to commit himself emotionally. He's so concerned with freeing a country, he's blind to the need to free a specific person. Just like the boy in 1966, he's got something to do, and he's going to leave his love waiting. Only this time, she is trapped, she can't wander in search of satisfaction the way May could. 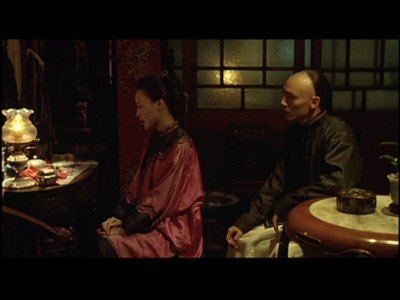 Once again, Hsiao Hsien takes great pains to capture the detail of the time period. The colors in "A Time For Freedom" are sumptuous, especially May's gorgeous purple dress. The director makes a far more exciting stylistic choice, though, by shooting this portion of Three Times as a silent film. A bare minimum of dialogue is conveyed via title cards, and the rest of the scenes are played out with just music. Only traditional songs performed by Shu Qi feature any synced sound. This radical idea not only works to portray the artistic reality of 1911, but it also underpins the emotional distance of the two characters: they are speaking, but how much is being heard?

The girl who Mr. Chang helps out is played by the same actress who plays Haruko, the girl Chen originally pursues in 1966. She's also the girlfriend of Chen's character in "A Time for Youth," the 2005 segment. She's the other "three" of Three Times, the third part of a love triangle, the eternally jilted. In "A Time for Youth," Chen plays Zhen, a photographer who becomes enraptured with the intense musician/performance artist Jing (Shu Qi). Jing is also in a relationship, a lesbian love affair that she dooms with her clandestine rendezvous with Zhen. The two artists are drawn together by an irresistible force, and the consequences of their actions never factor into their thinking. In comparison to their historical predecessors, they have nothing tying them down. They are youth, they are in the moment. Jing's lyrics contain lines about having a soul that is empty and for sale, and she has branded a Yen symbol on her throat, declaring herself a commodity. Zhen and Jing end up together, but the damage they do begs the question, in our modern times, we may be free to pursue our love, but are we better for it? It's a toss up for which image is the precursor of a more definite future: the clasped hands of the lovers at a 1966 bus stop when Chen is leaving Qi behind, or holding on out of necessity as they rocket off on a motorcycle together in 2005.

Still, even when tragedy seals the deal, the passion of lovers in Three Times rules all. Chu Tien-Wen and Hou Hsiao Hsien made the right move by dividing the film up this way. By showing one couple separated by circumstance, another doomed by a fear of commitment, and a third that damns all outside obstacles, their mutual obsession leaving them only with each other, the writer and director have shown us the full breadth of love, with all of its pleasures and its heartbreak. Irregardless of what brought the 2005 pairing together, we're left with the feeling that if we could only clutch the one we love tight enough, everything will be all right. We can feel this way forever, regardless if it's 1911, 1966, 2005, or far, far beyond. 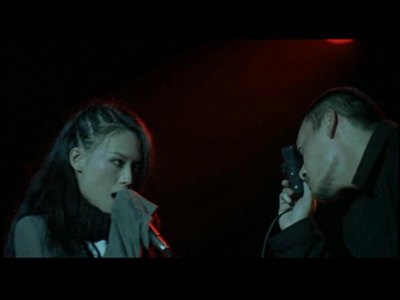 Video:
As noted in the review, the colors of the period costumes in Three Times are gorgeous, and they come through vividly in this widescreen (though, sadly, non-anamorphic) transfer. Hou Hsiao Hsien also makes great use of neon-lit streets and moody interiors, and the transfer on this disc glows and recedes where and when he intended.

Sound:
The original Taiwanese soundtrack is given an excellent 5.1 mix. A lot of the sound in Three Times is atmospheric, with the main actors sitting quietly as the world moves on around them. The mix moves around in such a way that the viewer is made to feel he or she is in amongst it, too.

There are two subtitle options: English and Spanish. The English translation is done very well, though I am puzzled by the choice not to translate the songs Shu Qi performs in the 1911 segment. Judging by her expressions and the placement of the numbers, one would guess they make some kind of commentary on the action. The songs she sings in 2005 are subtitled, and they are sung in English, albeit with a thick accent. It would have been nice had the translators been consistent.

Extras:
Nothing. As with my review of Manderlay, I'd have probably given this disc our top ranking had IFC taken more advantage of the DVD medium.

FINAL THOUGHTS:
Highly Recommended. A triple-tiered collection of stories told over three time periods, Three Times is a stunning, tranquil investigation of the things that draw two lovers together and the speed bumps that often prevent their union. Regardless of those obstacles, the feeling of the film is of being in love with the romantic concept itself, as well as Hou Hsiao Hsien's never-ending love affair with cinema. An absolute delight. 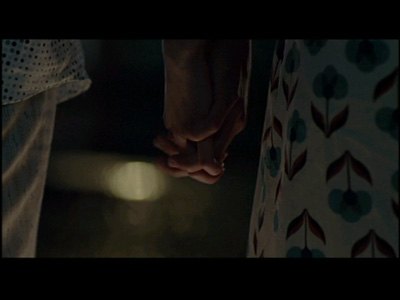