Mrs. Parker and the Vicious Circle


"I'll wear my heart on my sleeve like a wet, red stain." 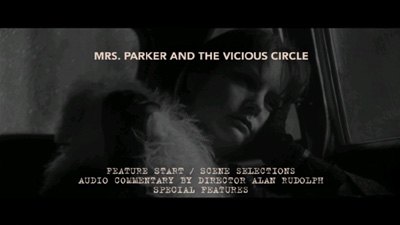 The life of Dorothy Parker, as portrayed in Alan Rudolph's 1994 biopic Mrs. Parker & the Vicious Circle, is like one long, drunken night. It starts off fun, with witty bons mots tossed out between refills, but as the morning approaches and the bottle gets harder to find, those laughs are soon replaced by tears.

The real Dorothy Parker was a writer in the '20s and '30s known for writing verse with a caustic wit. In a weird way, she's almost like an early Sarah Silverman, setting up her reader with a sweet intro and then hitting them with a devastating punchline. Only her interests were far more tangled up in the emotional affairs of men and women and not so much with social taboos. She wasn't looking to shock nearly as much as she was looking to break your heart by showing you her own. Yet, both women have a yen for exposing the dirty mess that lies inside pretty packages. Parker wrote for magazines like Vanity Fair and The New Yorker, producing original work as well as reviewing plays and other people's books. In the mid-1930s, she moved to Hollywood like most writers of her time and worked on several movies, including the 1937 version of A Star is Born and Hitchcock's Saboteur.

I say she was known for her verse, but she was actually best known for being part of the Algonquin Round Table, a regular meeting of artistic types that took place in the restaurant of the Algonquin Hotel in New York. Sporting the sharpest tongues of their day, these folks drank the night away while trading wry verbal jabs. This is the period that Alan Rudolph and his co-writer Randy Sue Coburn mainly concern themselves with. The film is about Parker's struggles as a writer and as a woman searching for love. It's also about drinking to dull the pain. 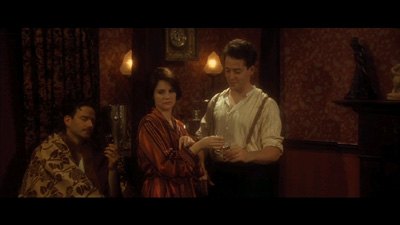 Jennifer Jason Leigh was born to play Dorothy Parker, and it's arguably the best performance of her career. She presents a woman who is hard to decipher. The slow delivery of her clever words could just be a drunken slur, but she's also using it to mask her loneliness. Every moment of life hurts, and every word is an effort. She is doomed to pursue the wrong men, be it her dope-fiend husband Eddie (Andrew McCarthy), the cavalier journalist Charles MacArthur (Matthew Broderick), or the man who appears to be her soulmate but who never takes her to bed, the droll Robert Benchley (Campbell Scott). All three of those men are married, and only one of them to her.

Dorothy's relationship with Benchley is the most important one. They have a real connection, never at a loss for words and always able to count on each other. Campbell Scott is a good match for Jason Leigh. He stands tall in Benchley's stoic humor, timing his delivery in the same slow-gin manner as hers. In the first half of the movie, it's his hurt that is out front. He isn't about to leave his wife (Jennifer Beals), and something is keeping him from taking the plunge. So, he stands back and watches Parker with other men, the self-loathing clear in his haunted eyes. Halfway through the movie, Dorothy catches him eyeing another girl in a speakeasy. She asks him why they never "misbehaved," and he gives her a couple of intellectual excuses. Here the worm turns. Unhappy with his answer, she practically pushes Benchley into the arms of the other woman, and now the lovelorn weariness will become her cross to bear.

Mrs. Parker & the Vicious Circle isn't all doom and gloom, however. We see several of the raucous bull sessions that the Algonquin legend is built on, and there are many parties with the likes of Harpo Marx and F. Scott Fitzgerald popping in for cameos. And actually, speaking of cameos, there are a lot of actors who would later become more famous that I forgot got some of their earliest work in this film, possibly because I didn't know who they were at the time. Gwyneth Paltrow, Lili Taylor, Heather Graham, Rebecca Miller (director of The Ballad of Jack & Rose), and Stanley Tucci all have small parts in Mrs. Parker & the Vicious Circle, and if you keep your eyes pealed, Cyndi Lauper even makes an appearance. (Jon Favreau is listed among the cast, but I never spotted him.)

Even so, all of this happiness is a front, and eventually there will be a morning after, as seen in flash forwards to scenes in Hollywood and later in New York, when Dorothy has returned there to live in obscurity. These scenes are shot in black-and-white, setting them apart from the "present day" of the movie. Black-and-white is also used for the scenes of Dorothy sitting alone and reciting her poetry. Those are splendid interludes in the film, both adding to the emotional weight of the main action and giving viewers a real taste of Dorothy Parker's writing. Too often biopics about writers or artists pass without giving much of a sense of the subject's work. Mrs. Parker & the Vicious Circle shows how Dorothy Parker's life and her writing were inextricably linked, and it leaves its audience with an affinity for the woman and her craft. 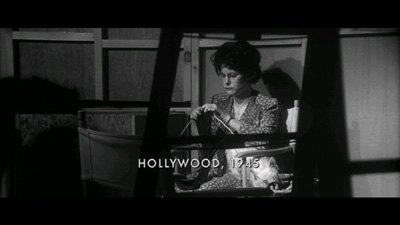 Video:
Mrs. Parker & the Vicious Circle is given a widescreen transfer enhanced for 16X9 TVs, preserving its 2.35:1 aspect ratio. Though listed as a new digital transfer, some scenes looked a little off to me. Every once in a while there seems to be a soft glow over the picture, perhaps intended to look like we are viewing it in a blurred, boozed-up stupor. There are also times where there seems to be an excess of orange, almost like I am watching an old VHS taped when the movie ran on STARZ! It's not an appallingly bad transfer or anything, I just can't help but think it could have used another pass to smooth out remaining trouble zones. Also, there is a layer shift at the 1:32 mark. 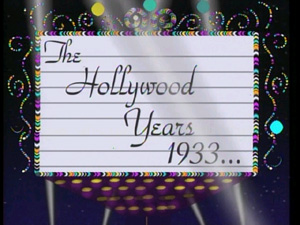 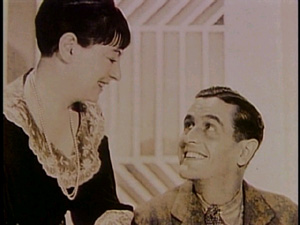 Extras:
"Would You Kindly Direct Me to Hell?: The Infamous Dorothy Parker" is a 47-minute documentary about the writer that appears to be have been made to promote the movie, if the out-of-date graphics are any indication. It contains a liberal dose of movie clips alongside interviews with director Alan Rudolph and screenwriter Randy Sue Coburn, as well as the three main actors from the movie. The program spans the whole of Dorothy Parker's life, from childhood to New York, and on to Hollywood and her eventual decline. There are interviews with her biographer Marion Meade, writers like Gloria Steinem and Fran Lebowitz, and several critics. It's a good bonus for the disc, giving a more straightforward picture of the author. It is also peppered with photographs and recordings of Parker reading.

A thirteen-minute interview with composer Mark Isham covers his working relationship with Alan Rudolph on this and other films, as well as exploring his techniques.

Alan Rudolph recorded a full-length commentary. It's quite informative, concerned mainly with the mechanics of the film and with fleshing out the biographical details. There are amusing anecdotes in which he points out historical accuracies that he's been accused of contriving, and invented moments that historians have praised, including supposedly famous Parker zingers that only Jennifer Jason Leigh has said. From the sound of certain references, like calling Gwyneth Paltrow a "new" actress, I gather this is an older commentary Rudolph recorded for a laser disc release; yet, the information is so good, it hasn't dated itself. (It's probably better than 90% of current commentaries.) Fair warning: he occasionally mentions the four-hour "actors' version" of the movie and the various extended party scenes that were deleted, and if you enjoy the movie as much as I did, he's only going to make you wish someone would double-dip into the vaults. (Criterion? Hello?)

Finally, there is the original trailer and a TV commercial, and a booklet in the case with a two-page essay about Dorothy Parker. The disc also has one of my favorite DVD covers in a long while, a cameo image of Jason Leigh as Dorothy Parker in the center of an illustration of the Algonquin table.

FINAL THOUGHTS:
Highly Recommended. Jennifer Jason Leigh gives an amazing performance portraying one of America's most gifted and colorful female writers. Mrs. Parker & the Vicious Circle is more than a standard biopic in that it manages to make Dorothy Parker's tumultuous life and emotionally searing writing come together so that modern audiences can get a greater understanding why her image and her words endure. It's also an excellent snapshot of a time when bright minds ruled New York City, and how the comedown of the roaring '20s left a lot of them emotionally and mentally destitute. Mrs. Parker & the Vicious Circle is a remarkable movie for any age, beautifully constructed on an emotional arc and all the more impacting for it. 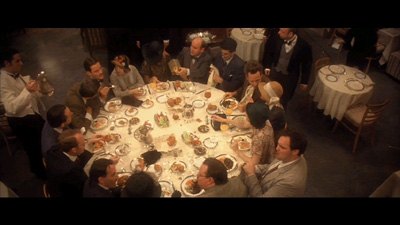