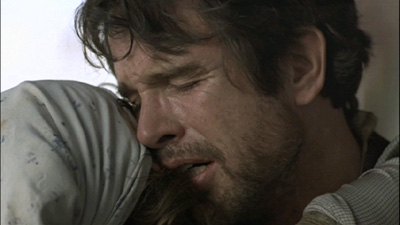 Warren Beatty's 1981 masterpiece Reds wasn't welcome in my house when it came out. Due to all the focus on the McCarthy-era in movies like Good Night, and Good Luck, the fear of communism on American soil sometimes gets confined to the 1950s, and we forget that it lasted far into the '80s, until Glasnost and the destruction of the Berlin Wall. It doesn't matter that Beatty's film doesn't actually sell us communism as the ideal system of politics, red was red and you were better off dead than support anything even touching on the topic.

So, even though I didn't see it for the first time until earlier this year, just before the DVD was announced, Reds always held a position in my brain as a dangerous film. That it lived up to this reputation, that it still seems politically daring twenty-five years later, speaks happily to Beatty's skill as a filmmaker (Reds was nominated for twelve Oscars and won three) and sadly to how badly pesky notions like freedom of speech and the press have fared in the last couple of decades.

Reds is an epic movie, a sort of real world Dr. Zhivago. Beatty plays author and activist John Reed, a man torn between his convictions and the pressures of life, driven by his artistic impulses to tell it like he sees it and never back down. It's easy to see why Beatty was drawn to Reed's story. As a brainy Hollywood auteur, he has always been torn between the commerce of selling his pretty face and the art of making more intelligent films like Reds. Hell, to get this film made, he starred in the far more commercial Heaven Can Wait to earn the sort of box office clout that would cause Paramount to take a chance on a politically shaky proposition.

Of course, Reds paid off for Beatty in much better ways than it did for Reed. The author's life path was fraught with troubles, as his idealistic notions gave over to a much more dour reality. As Reds tracks him, Reed goes from touring small liberal clubs across the U.S. in the early part of the 20th century and eking out a living writing for small-time magazines to being chosen as the official delegate to Russia to try to convince the Bolsheviks to officially recognize the American Communist Party. All the while, his health suffers as he continually pushes himself further. Not even losing a kidney can stop him from showing up at a rally in a barn in the middle of nowhere. Eventually he will be trapped in Russia and put through his paces by the Communist regime, and the frenzied living catches up with him. 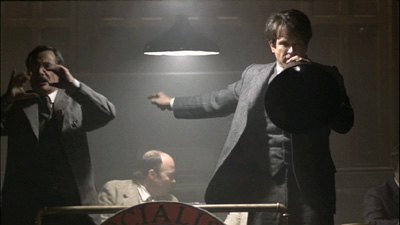 Probably more important than the dissolution of his health, however, is the strain Reed puts on his relationship with Louise Bryant (Diane Keaton), a headstrong writer in her own right, but one who desires more human compassion than a political machine like Reed can give her. Noted playwright Eugene O'Neill (Jack Nicholson, showing he can generate just as much heat through restraint as he does hot dogging) tries to fill that gap, but even his cynical heart gets crushed under the undeniable lure between the two. This is where the Zhivago comparisons really comes in. Nothing can keep the couple apart, neither the great cultural revolution nor their considerable personal faults. They are meant to be together, and their passion for one another eclipses even Reed's passion for liberating the workers of the world as the true lure of Reds.

Along the way to their famous train station reunion in Russia, Reed and Bryant naturally encounter a lot of colorful people. Beatty has populated his film with some of the finest character actors in the history of cinema, such as Gene Hackman, Paul Sorvino, Edward Herrmann, George Plimpton, and M. Emmet Walsh. Maureen Stapleton earned an Oscar as Emma Goldman, an anarchist who was at one time considered the most dangerous woman in America. Stapleton relishes Goldman's dogma, and yet manages to show that the woman is more than single-mindedly dedicated to a cause, particularly as things start to sour. In another stroke of brilliance, Beatty casts Jerzy Kosinski as Grigory Zinoviev, the communist administrator that puts Reed under his thumb. Kosinski is the author of The Painted Bird and Being There, and he knew a thing or two about the trials of living under communism. He fled Poland for New York in 1957. 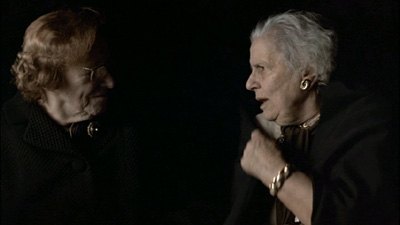 Kosinski isn't Warren Beatty's only concession to reality. The dramatic scenes of Reds are cut together with interviews with what Beatty calls "Witnesses," actual people from the time period of various political stripes. They include famous people like Henry Miller and not-so-famous people who knew Reed, even if just tangentially. By not identifying them in the film, Beatty gives them all equal weight, proving that the voice of history is classless. By having them sometimes disagree, he also shows that history is malleable depending on who tells it. There is no single perspective. This makes Reds one truth, but there may be others, and it suggests that for as clear as Reed was in what he was doing, it doesn't mean the political waters of the time were clear as well.

Reds is a legendary film, and its appearance on DVD is long overdue. For a film that has been hyped to the point of being mythical, it could have easily proved to be disappointing; thankfully, it is not. As one of the writers of the film, its director, and its star, Warren Beatty has achieved a cinematic hat trick, scoring a truly remarkable film for his efforts. Reds works as a political tale, the chronicle of one man's obsessions, and as a love story. It never buckles under its own weight, but holds steady right up until the end. Believe the propaganda. Reds is moviemaking at its best.

Video:
Reds was a big movie shot in a big way, and it is given a lovely widescreen transfer enhanced for 16X9 television sets. Having recently watched the movie on VHS, I can attest that this new disc is heaven. Reds has really been given the treatment it deserves.

Sound:
There is a beautiful Dolby 5.1 mix, as well as mono mixes in French and English. No complaints. This is top-notch all way. 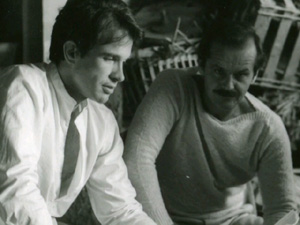 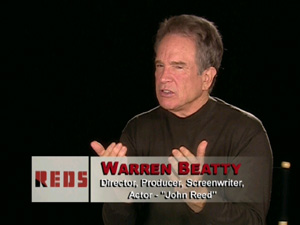 Extras:
Warren Beatty states right off that he doesn't participate in DVD extras and that his involvement here is a rare thing, so it's no surprise that we don't get an audio commentary. Instead, we get a seven-part documentary on disc 2 called "Witness to Reds." You can watch each part separately or play it all at once, and the entire program is a little over an hour. It contains production photos, scenes from the movie, and contemporary interviews with Beatty, Jack Nicholson, Paul Sorvino, Edward Herrmann, Barry Diller (one of the execs who greenlit the movie), Kiki Kosinski (widow of Jerzy Kosinksi), assistant director Simon Relph, special consultant Jeremy Pikser, cinematographer Vittorio Storaro, composer Stephen Sondheim, production manager Nigel Wooll, location manager Redmon Morris, 2nd-unit director Craig R. Baxter, and editors Dede Allen and Craig McKay. With that many people involved, "Witness to Reds" is as detailed as you would hope.

The seven segments are as follows:
* "The Rising" - financing and early pre-production
* "Comrades" - casting and how Beatty works with actors, as well as the pitfalls of starring and directing at the same time
* "Testimonials" - the story behind interviewing the Witnesses, including some raw footage
* "The March" - locations and shooting techniques
* "Revolution, Part I" - the obsessive drive of Warren Beatty and his relationship with Vittorio Storaro
* "Revolution, Part II" - the scope of the bigger scenes and the production challenges of shooting crowds and trains
* "Propaganda" - the post production, including editing, music, advertising, public reaction, and awards

Disc 1 has a new trailer for the DVD, which mainly drives home how some of the political issues in Reds are just as relevant today as they ever were.

The DVD comes with a sturdy cardboard case, and the interior sleeve is printed on shiny paper.

FINAL THOUGHTS:
DVD Talk Collector Series. Reds is that rarest of animals: the larger-than-life critical darling that is actually as big as it's purported to be. Warren Beatty's epic romance set within the political turmoil of the Communist Revolution is a tour de force, and this DVD set finally puts right the crime against film fans that was its absence all these years. 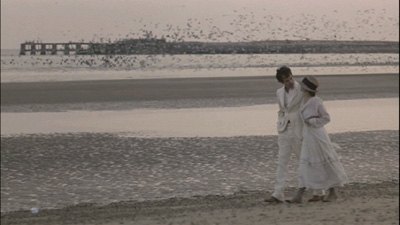