VCI // Unrated // September 26, 2006 // Region 0
List Price: $14.99 [Buy now and save at Amazon]
Review by Stuart Galbraith IV | posted October 20, 2006 | E-mail the Author
Though to call 'em such is pretty laughable, the two films that comprise Western Film Noir Vol. 1, Little Big Horn and Rimfire, are both somewhat ambitious, above-average programmers plucked from almost total obscurity, and though distributor VCI has been extremely inconsistent with its transfers, virtually everything they've released in partnership with Kit Parker Films, for whom VCI has distributed the "Hammer Noir," "Legendary Outlaws," and "Lost Noir" lines, has been excellent. This is no exception. 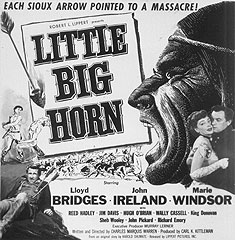 Little Big Horn (1951) is like a strong B-picture version of one of John Ford's U.S. Cavalry films, especially Fort Apache (1948). After pigheaded Captain Phillip Donlin (Lloyd Bridges) discovers that his lonely wife, Celie (Marie Windsor), has been carrying on an affair with Lt. John Haywood (John Ireland), against orders he embarks his patrol on a suicide mission to support General Custer's 300 troops and their imminent battle against four thousand Sioux at Little Big Horn. With little regard for his men, Donlin's only interest is in watching Haywood squirm, and could care less if he and his men are wiped out in the process.

The impressive film is mostly a character study with action vignettes, splitting its time between the Donlin-Haywood conflict and the 15 or so cavalrymen who accompany them. Admirably, even the most minor of characters are given at least some distinguishing identity and backstory, and played by a good cast of familiar if lesser names. Sometime songwriter Sheb Wooley ("Purple People Eater"; he was later a regular on Rawhide) for instance has a good role as the patrol's experienced scout while King Donovan (Invasion of the Body Snatchers) has a wonderfully touching scene as a soldier awaiting the arrival of his mail-order bride. Supporting players Hugh O'Brian and Jim Davis would eventually star in hit TV series, while Reed Hadley, as a former officer demoted after the Civil War, would go on to a prolific career narrating trailers and dubbing innumerable genre films, especially sci-fi and horror imported from Italy and Japan.

According to the DVD's liner notes, Little Big Horn was produced for just $184,849, extremely low even by 1951 standards for a film of this scale. The cheapness of the production (still reportedly Lippert's most expensive film up to that point) becomes apparent in early scenes that rely too much on obvious, cramped soundstage "exteriors" (the creased corner of the painted backdrop is visible in at least one shot) though most of the second-half of the film was shot on location. The short schedule also results in some mismatched cutting and overall Charles Marquis Warren's (later a major producer of TV Westerns including Gunsmoke and Rawhide) direction is perfunctory and inferior to his thoughtful screenplay. 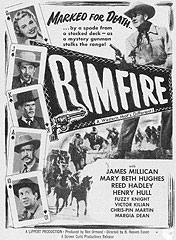 Rimfire (1949) was the last film directed by B. Reeves Eason. Though he had been directing films since 1915 (and was an actor before that), he's probably better remembered as a second unit director on such A-list films as the silent Ben-Hur (including its chariot race), The Adventures of Robin Hood, Gone with the Wind, and Duel in the Sun. Though somewhat eccentric in style, visually Rimfire has a lot more kinetic energy than its co-feature, with more camera movement and edgy close-ups - there's a lot of "coverage" for such a low-budget film - clearly the work of a second-unit man.

The film is oddly structured with arguably too many characters and too much story for its 63 minutes; it's not clear which direction the meandering narrative is heading until its final third. The film opens with a stagecoach robbery thwarted by Tom Harvey (James Millican), who later rides into Stringtown, New Mexico supposedly looking for work, but who's actually a captain in the Secret Service investigating stolen federal gold. Working undercover, he gets a job as deputy to local Sheriff Jordan (Victor Kilian) and is attracted to his niece, Polly (Mary Beth Hughes). Meanwhile, suave semi-reformed gambler the Abilene Kid (Reed Hadley again) quickly determines that some old criminal associates, led by saloon owner Barney (Ray Bennett), are behind the thwarted stagecoach robbery.

The plot takes a sharp turn toward the supernatural (or maybe not) in its final 20 minutes, with a revenge angle later done better and taken one step further in films like The Stranger's Gundown (Django il bastardo, 1969) and High Plains Drifter (1973). (These last 20 minutes of Rimfire are about as close to noir as this double-bill gets. Though quite a few Westerns of the period could legitimately be classified as noir, these two simply don't qualify.) Rimfire doesn't play fair with its audience and the resolution is both improbable and, unlike the rest of the film, looks slapped together in a great hurry. Still, the film has a fine cast and is nicely-paced, and though it probably cost about as much as (or even slightly less than) the average late-1940s B-Western, it exhibits a lot more ambition.

Like Kit Parker's other Double Feature releases, Little Big Horn and Rimfire are impressively transferred. The all-region DVD presents both films on a single-sided DVD-9, both in their original full-frame. Little Big Horn is apparently transferred from something other than the original negative, but looks just fine, bright and sharp, despite a couple of splices. Rimfire, in its home video debut, is transferred from its original 35mm negative and looks good also, though the soundtrack cries out for some major noise reduction. Dolby is credited, but Rimfire's audio overflows with scratchy sound. There are no subtitle options.

Supplements include VCI's usual biographies of key staff and crew, trailers for both films, as well as other VCI and Kit Parker titles: The Cowboy, The Great Jesse James Raid, I Shot Billy the Kid, and the forthcoming The Stranger on Horseback. For Little Big Horn, additional extras include a photo gallery and an informative essay of trivia, while Rimfire offers liner notes by exploitation producer Sam Sherman.

Kit Parker Films is apparently the current owner of the Robert Lippert library (the copyrights on these titles were renewed by Weiss Global Enterprises), and their releases through VCI have been consistently good presentations of movies that had flooded local television airwaves back in the 1950s and '60s but have generally been hard to find since the dawn of home video. The movies they've issued so far have been carefully chosen; most everything so far has been a pleasant surprise. Recommended.